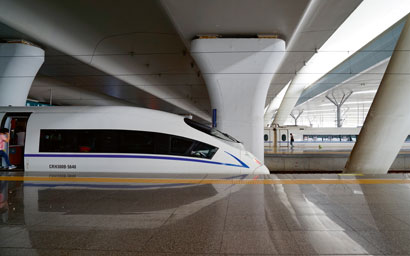 Following the success of the Shanghai-Hong Kong Stock Connect, David Stevenson speaks to Luxembourg Ucits professionals about the outlook for the next stock market link-up.

When the first of the two Stock Connect systems opened, it was widely expected that MSCI would include China’s A-shares in its emerging markets index. But investors last year knew that this would not be the case.

Luxembourg Ucits funds were the first to use the Shanghai-Hong Kong Stock Connect and the Grand Duchy was within its rights to expect the same appetite for China’s second-largest exchange, Shenzhen.

Demand for Shenzhen’s 881 listed stocks met only a fifth of the available quota. Aside from the MSCI disappointment, China had also experienced some serious market ructions between the programmes.

But as China Post Global points out, these combined exchanges make up the second-largest equity market in the world by market capitalisation and the firm is launching a smart beta exchange-traded product that will use components of both Shanghai and Shenzhen exchanges. This will be domiciled in Luxembourg and aims to select stocks for a minimum volatility strategy.

OBJECTIVE
Bill Maldonado, global chief investment officer, equities at HSBC Global Asset Management (HSBC GAM), thinks that despite the Shanghai-Hong Kong Stock Connect’s strong start, the average usage of the quota is not that high and both projects are experiencing a gradual take-up. He adds that when developing a Ucits fund to access Chinese markets, the investment objective is critical. HSBC GAM has broad-based products that make use of both the Connect systems.

Each one offers a completely different set of options from the other. As KPMG Luxembourg partner Victor Chan Yin points out, Shenzhen firms tend to be smaller than the large international conglomerates found on the Shanghai exchange. In other words, it tends towards value stocks.

Or as Lyxor’s head of Northern Europe ETF strategy, Adam Laird, observes: “The Shenzhen Connect has some additional points of interest [compared to Shanghai]. For one thing, the Shenzhen equity market is much more high-tech: over 50% in consumer, healthcare and technology companies. This is important: these companies represent the new economy in China and there’s a lot of opportunity there.”

Lyxor has certainly benefited from access to Chinese markets. Its Ucits ETF CSI 300 A-Share, comprised of stocks from both the Shanghai and Shenzhen exchanges, returned more than 27% in a year.

“This Stock Connect is not one way, it’s both. There are a lot of Chinese getting richer and this is a way for them to invest via the connect,” says Yin.

Walking through the centre of Luxembourg, the Chinese influence is clearly apparent; Bank of China, for example, has been present in the Grand Duchy since 1979. Now all the major banks, viewing it as a conduit with Europe, have established branches. Jon Griffin, JP Morgan Asset Management’s country head in Luxembourg, views the latest Stock Connect as one more access route to a growing market place. “It’s a development, not a revolution,” he says.

But the Luxembourg funds industry association, Alfi, sees this move as a golden opportunity for investment funds to access new asset classes.

“The Shenzhen Connect provides international investors with another direct link to access China’s domestic A-shares market outside of the existing route of getting a foreign investor licence through the Qualified Foreign Institutional Investor (QFII) and Renminbi QFII (RQFII) programmes,” said Marc-André Bechet, director legal and tax at Alfi, when the Stock Connect opened last year.

Since the Chinese market is so huge, says Bechet, it follows that investors need exposure to it. “If you compare the size of the GDP of mainland China to the US, getting exposure to fixed income and equities is under-represented,” he says.

China used to have stricter capital controls and would grant countries either QFII or RQFII quotas with a tight limit. The Luxembourg regulator, the CSSF, authorised the first RQFII Ucits fund in 2013 as the two countries continued to seek mutually beneficial opportunities. According to figures from Alfi, Luxembourg is the second-biggest recipient of Chinese foreign direct investment, behind the US. Considering the population of Luxembourg is just over half a million, this is a considerable achievement.

Firms still use the RQFII regime to invest into China, as it allows access to stocks not covered in the Stock Connect programmes. In addition, last year the Chinese authorities made another move towards liberalising markets: investors can now access Chinese fixed income using the China Interbank Bond Market (CIBM) previously available only through RQFII.

“You can invest in Chinese debt through Luxembourg. At the moment, there are very few defaults in China,” says KPMG’s Yin; he adds, however, that a lot of economists outside China say the government is helping its companies avoid default, perhaps to support the small private sector, and bearing in mind the importance of its large, quasi-state-owned enterprises. Though there have been few defaults
so far, the ones that do happen tend to be big.

Luxembourg-based Clearstream, an international central securities depository, also says Stock Connect is a further step towards the opening of the Chinese stock market for foreign investors, and that this goes hand-in-hand with the Chinese government’s attempts to establish the renminbi as an international currency and liberalise its financial market.

DISCONNECTED
While it is laudable that China is continuing to liberalise its capital markets, some are still hesitant about playing the A-shares game.

Yin says there is room for improvement, considering the volatility of equities on Chinese exchanges.

HSBC GAM’s Maldonado notes that the period between the opening of the Shanghai and Shenzhen projects was a difficult one for equity investors, on account of geopolitical uncertainty and volatility. It was not conducive for emerging market equities in particular, he says, and both the Stock Connects should be viewed in that context. On a positive note, worries of a ‘hard landing’ in China came to nothing, leaving him bullish on Chinese equities.

China suffered a prolonged period of volatility, starting in June 2015 when the Shanghai Composite Index lost 30% of its value in a month. At the start of 2016, trading was suspended twice on the opening day of the Shanghai exchange, so it is understandable that some investors are reticent.

Alfi’s Bechet says that timing is important with Chinese equities, as the “market is a bit bumpy and some investors are reluctant to invest”. There has also been volatility in China’s currency, but authorities are taking steps to make the country’s equities more desirable.

To bolster investors’ ability of investors to hedge their positions, the range of derivatives on offer has been expanded – and in Luxembourg, firms have been adapting their prospectuses to meet with Ucits investor protection standards.

“If there’s market risk, you need to make some disclosure in your prospectus,” says Bechet, with the caveat that that this is done for many markets, not just China.

MSCI’s decision to delay the inclusion of A-shares in its emerging markets index last June may have disappointed many, but as Maldonado says, inclusion is a question of “when, not if”.

Bechet says asset managers are worried that if China is accepted into the index this year, they may not be ready in time to enter the market. This is especially true of index trackers, which must be invested from day one or “you have an issue with investors”.

But Luxembourg’s strong ties with China, from its QFII and RQFII programmes to the more recent Stock Connects, present investors with a variety of routes into China’s capital markets.

The CSSF was the first regulator to allow funds to use Stock Connect. Further liberalisation of Chinese markets will only cement further the strong relationship between the two nations: the China of 1.3 billion people and the Luxembourg of 567,000.