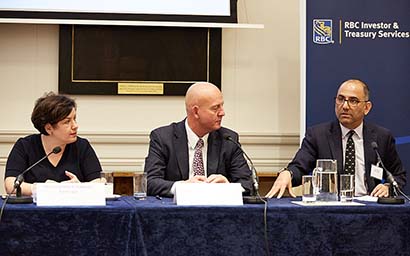 The past decade has seen massive outflows from actively managed funds to passive vehicles. An event hosted by Funds Europe, in association with RBC Investor & Treasury Services, asked experts for their take on the way ahead.

From a stance of mutual antagonism, the passive-versus-active debate is moving towards one of cooperation so that in future, both types of investing may well coexist in the same ecosystem to the benefit of clients.

Our panellists explored how best to combine the two approaches; where one works better than the other; what kind of role smart beta has to play; and which passive vehicles are likely to succeed.

New York-based Richard Garland, managing director at Investec Asset Management, said that, while his firm was firmly committed to the active management of funds, it is “not delusional about what is happening with exchange-traded funds and passive funds”.

“We have made a decision that we will never go into passive, but I can’t make the case that we have to be totally active,” he told the conference in the City of London. “I think that passive has a place in client portfolios and everything goes through cycles.

“However, all the stuff in the press about the death of active investing is ridiculous. Last year was the best year ever of the last four years for active fund sales in Europe.”

But the situation in the US, where passive funds account for half of the industry, was the opposite of that in Europe, he said.

“If you are a long-only equity manager in the US, you will have had an appalling five, six or seven years and you will continue to have an appalling time.

“Clearly it is not the end of active investing but we have to be cognisant of what is happening with passive.”

Garland believes a significant threat for active managers is that fees will have to continue to fall in order for the sector to remain competitive.

He believes, however, that the biggest threat confronting active managers does not come from the passive providers, but from the alternatives sector, which can provide low correlation, high outperformance or a target return.

“It is not so much an active versus passive situation: it is a passive, active and alternatives situation and that is the threat that I see,” he said.

Garland said 25% of his own personal investment portfolio is passively managed. As the industry moves increasingly towards flat-fee advisory rates, the cheaper fees of the passive sector “is why passive is not going away”.

All fees will continue to come down, he thinks, but passive is mostly a threat to closet index trackers.

“I want to stress as a pure active manager focused on high active share, you have to have concentrated portfolios,” he said. “If we do a good job we will still do very well, it is the closet indexers that will die. The biggest threat to passive is that fees get cut to zero.”

The challenge for the industry, meanwhile, is that costs are going up as compliance costs rise because of more regulation and Brexit restructurings.

“All of our costs are going up at the same time as our fees are going down,” he said.

Admitedly, sales in the first quarter of 2018 were “an altogether different story”, but “the active sector is not dying and it is not going away”.

The “best thing” that the passive sector has done for the funds industry has been putting a “real focus” on fees, he said. “My worry with the passive industry is that as it continues to grow, it gets all the positive press. The active industry has not done itself any favours whatsoever over the last couple of years, just in terms of managing the argument, and it has pretty much given passive business a free hand.”

Taneja pointed to a recent survey carried out by his firm, which found that 12 asset management firms in Europe have, over the past 18 months, either launched smart beta products or are planning to do so.

The survey of 3,500 financial advisers, wealth managers and fund selectors, carried out in the third quarter of 2017, found that 40% of respondents had no plans to launch smart beta products. The remainder expressed reservations over three criteria: transparency, track record and costs.

“Based on a snapshot one-off survey, it doesn’t sound like the industry is mad keen on smart beta and it is not getting the thumbs up yet,” he said.

“In the UK, Switzerland and to a lesser extent Germany, we are now beginning to see greater use of passive by the non-institutional market place, but it is still not anywhere near as strong as we have seen in the US.”

Taneja added that the funds industry in Europe has so far been impervious to the “massive consolidation” that has affected many other industries and had grown exponentially in recent years.

He pointed out that there are 8,000 mutual funds in the US, compared to 33,000 across multiple shared classes in Europe – despite the fact that, measured by assets under management, the industry in the US is a third larger than its European counterpart.

Garland said that the difference in the number of funds was largely because of the number of countries, cultures and languages in Europe.

Lifetime investment
Bella Caridade-Ferreira, chief executive of research firm Fundscape, contrasted the platform market in the UK with the rest of Europe.

“It is not as simple as an active versus passive debate because in the UK, we are suffering what Europe has suffered for a very long time and that is called vertical integration,” she said.

Caridade-Ferreira said she was a “great believer” in both the active and passive management of funds, citing an active fund that she set up for her son when he was born 22 years ago.

Over that time, the £12,150 invested in the fund at the rate of £50 a month has grown to £33,000. “The fund has performed really well and outperformed the index and the cheapest index tracker we could find that still existed over the 22 years,” she said.

On the subject of costs and fees, she questioned whether fund managers need the “huge bonuses and huge pay packets” seen today, saying that any reduction in fund manager

benefit packages “would be a good starting point and would bring costs down”.

“I come across people on a daily basis who are on packages of £500,000. Why on earth should you be paid that and a bonus?” she asked.

Garland remarked that as profit margins declined, bonuses and compensation would also come down. “The two are linked,” he said.

“From an asset management standpoint you have to align your compensation with your clients’ interests fairly,” he added. “The biggest problem in this industry is that there is no transparency. Clients don’t know what they are paying for.

“MiFID II will help with that. If you have transparency about your pricing through the whole value chain and then transparency on what you are doing on the investment side, then you build trust with the end client. Unfortunately, we have lost the trust of the end client and we have got to get it back.”

Caridade-Ferreira said that while the passive sector had performed well during the bull market of the past nine years, there would be challenges ahead if current market volatility persists.

“In markets that are going upwards then yes, of course all funds are going to do well,” she said.

“If somebody is putting in £50 or £100 a month into a monthly savings plan, that money is being invested in exactly the same shares that are falling month on month in a bear market and there is nothing they can do apart from stop the investment. That is where fund managers can show their value against passive. When the market is going up, you are pushing up and artificially inflating the price of stocks and when it is going down, the opposite.”

Taneja agreed, but added that an examination of the performance of active managers over the first quarter of 2018 had been unimpressive and “pretty average at best”. Asked to sum up his expectations for the next five years, he said there would always be scope for active management. “I don’t know where passive is going to end up, but passive is not going away and good active is definitely not going away either.”

Garland said that the next five years would probably see further industry consolidation, but he could see little evidence so far that the two largest recent industry mergers (Janus Capital with the Henderson Group and Standard Life with Aberdeen Asset Management) were “working”.

“I do believe fundamentally there will be a change in how we deliver investment products, but that could be over the next ten years,” he said.

When it comes to the ETF sector, Garland predicted that competition and consolidation will eventually lead to the survival of just three providers: State Street, Vanguard and BlackRock.

“I don’t know why other firms bother and why all these firms are launching ETFs,” he said.

Caridade-Ferreira said she expected distributors in Europe will increasingly partner with the large fund managers who can service them, but that a large number of boutique managers would survive industry consolidation.