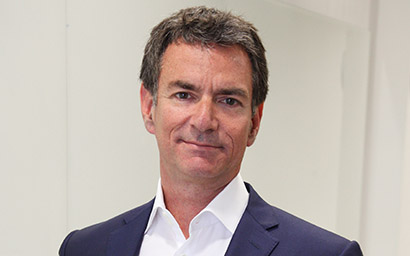 When bond specialist BlueBay was founded in 2001, a fixed income bull market was in full swing, fuelled by ever-decreasing interest rates across much of the world. Commentators have prematurely called the end of the bond bull market several times since, but obituaries have appeared again recently owing to exceptionally high levels of inflation.

European investors pulled billions out of a broad range of bond funds earlier this year – €45.3 billion during the first quarter, according to Lipper Refinitiv figures. Equities gained inflows as investors sought to protect portfolios from inflation erosion. Figures from the trade body Efama showed active bond funds returned just 2.4% between 2017-21.

Royal Bank of Canada (RBC), the banking group, bought BlueBay in 2010, and the acquisition diversified its mainly equities-leaning asset management business into bonds.

Plenty to do
Erich Gerth, the chief executive of BlueBay since 2017 and, since 2021, head of RBC GAM in EMEA and Asia-Pacific, says there is still plenty that investors can do with bonds due to the market’s size – but he acknowledges that the firm has had to position itself differently, given that investors face a difficult fixed-income environment.

“In 2019, interest rates were getting closer to zero,” Gerth tells Funds Europe, with reference to the Federal Reserve rate cut that year that saw the amount of negative-yielding debt reach $14 trillion globally. “At some point, there’s no income in fixed income.”

However, fixed income is a multi-trillion-dollar market, so even if investors are cutting back on allocations, “there are still things they can do”, says Gerth.

Last year saw BlueBay’s highest level of inflows since the acquisition, the chief executive says. Investors who were reluctant about the asset class were mainly those with traditional mandates. “We’re seeing greater appetite amongst institutional investors for less liquid or benchmark-tied fixed income strategies within emerging and developed markets,” Gerth says.

Lately, a new level of complexity in the ‘hunt for yield’ has emerged: securitisations. These are structured products backed by loans – for example, structured credit or asset-backed securities (ABS) funds. BlueBay runs both types.

Sid Chhabra heads the structured credit team, which was also boosted when RBC hived off its US collateralised loan obligations business to BlueBay in 2020. The move added $500 million in assets under management (AuM).

BlueBay’s emphasis on securitisation reflects broader interest across the investment industry. For example, USS – the UK’s largest private pension scheme measured by assets – recently launched its first ABS mandate, which is expected to exceed £1 billion (€1.15 billion). Elsewhere, Luxembourg and Ireland – which have major fund-servicing industries – both amended their securitisation laws, with trade body Irish Funds saying there was an emerging trend for Ucits investment managers seeking exposure to securitisations located in the US, Cayman Islands and Europe, with underlying credit exposure to European and US assets.

Cost of capital
Securitisations are one of the latest examples of how bond houses have diversified their strategies for more than two decades now.

Latterly, bond specialists have also sought to catch up with peers in equity markets by offering ESG integration. Bond investors lack the ability to pressure public companies through voting mechanisms, so they need other levers. Gerth explains that one lever is the cost of capital – the interest rates issuers pay on their debt.

The cost to a company of borrowing through bond markets in some cases “far outweighs” costs connected to issuing equity, says Gerth.

“If borrowing costs go up, it can influence a business. For example, in emerging markets, when we look at issues that affect rainforests in Brazil, say, we can engage with issuers to directly influence behaviour.”

He even argues that bank policy rate-makers in emerging markets can be influenced by bond short selling.

BlueBay’s approach to ESG earned the firm a special commendation in the ESG category of the 2021 Funds Europe Awards. Judges described BlueBay as a leader in fixed income engagement, with a strong ESG policy and evidence of a high level of corporate engagement.

Like many asset managers at present, Gerth says ESG is a key strategic business driver. Regulation and technology are the two other drivers, more so where they intersect.

Associated operational challenges and costs have led to BlueBay and RBC GAM working more closely: they started integrating their operations in 2020 and decided to move RBC GAM’s fixed income team in the US to BlueBay. In Europe, branch offices have been combined.

“The technology resources of RBC in relation to ESG, technology and regulation are in some ways very connected. How clients are reported to is partly underpinned by technology, and so as the amount of spend on technology is continuing to increase, it is common sense that we take advantage of the resources and scale of a major bank like RBC to benefit us and our clients.”

Despite BlueBay’s exacting focus on fixed income – originally as a multi-strategy hedge fund and now as a manager of alternative and traditional strategies – there is one path the firm has retreated from. In 2019, BlueBay sold off its private debt business (now called Arcmont Capital). BlueBay created the strategy in 2011, and in the following years, more institutional investors allocated to private markets investments, including private debt as an alternative to traditional bond portfolios.

With proceeds of $134 million from the sale, BlueBay built its emerging markets and structured credit strategies. Even so, why sell such a strategy just when its time has come?

“Private debt is interesting and seeing a lot of demand,” says Gerth. “I would say we were one of the leading providers, but the challenge was synergy with the rest of the business. The private debt business just needed to thrive on its own and it was difficult to get the intellectual capital for it. On the other hand, structured credit could sit nicely within our leveraged finance investment platform.”

Intellectual capital in structured credit has been added. In December last year, BlueBay announced the appointments of two specialists, with backgrounds in mortgage-backed securities or CLOs, to join Chhabra in attempting to combat low-interest rates and higher inflation that have affected fixed-income investors.

Low rates increase fee compression, Gerth notes, and ESG funds are not cheap to run. Clients expect, but do not pay for, ESG.