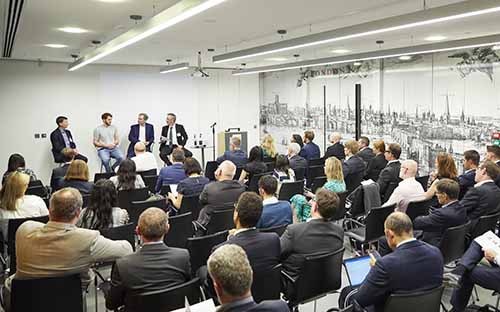 The fourth FundTech event of 2019, in London, featured a combination of interviews with innovators and panel discussions on some of the most critical underlying issues facing the industry, including the under-representation of women in financial technology and the evolving threats to cyber security.

Opening the event, Marochini talked about what exactly the ‘head of innovation’ role entails as well as the projects and pilots that have emerged from the SGSS innovation labs. He also presented his views on emerging technologies and their respective potential to add value to the market.

As president of Luxembourg’s Blockchain & Crypto Currencies working group, it comes as no surprise that Marochini sees enormous potential in the digital assets market. He also talked about the challenge asset servicers face in developing a robust digital custody offering.

In his previous role, Marochini was a risk manager, and it was one of the most serious risk issues – cyber security – that came next on the agenda.

The good news, said Hammond, is that the quality of tools to manage cyber risk has greatly improved in recent years – for example, products using AI to spot trends in cyber attacks. Discovering a breach through constant monitoring and testing has become critically important in managing cyber risks, said Vaughn, and this is another area where new technology has emerged.

Meanwhile, the fallibility of humans means that firms are increasingly realising that it is better to focus on minimising the time for recovery in the event of a breach rather than trying to eliminate cyber attacks altogether.

The AMX, established in 2017, was the inaugural winner of the Funds Europe Innovation of the Year award in 2018. Jooste, its outgoing CTO, detailed the technical work involved in setting up the infrastructure for the exchange.

It launched with the lofty ambition of becoming a global utility and knocking 40 basis points off fund managers’ costs. And while it continues to build its customer base and assets under administration, the stiffest challenge may be introducing a new business model into a traditional environment like the asset management market. 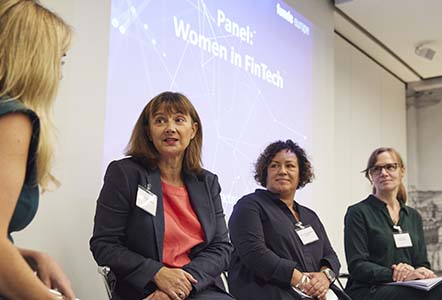 The day’s second panel discussion focused on the important issue of gender diversity in asset management technology. While fintechs may attract a younger generation of technology professionals, it has not necessarily succeeded in correcting a long-held gender imbalance. There remains a glass ceiling even in cyberspace.

Sionic partner Clare Vincent-Silk (second from the left), Fundscape CEO Bella Caridade-Ferreira (third from the left) and Kate Webber (right), lead product manager, fund services, Northern Trust, talked about their experience in the industry. As all three described the obstacles they have faced and the adjustments they have made in order to forge a career, it seemed that there were grounds for optimism. As Vincent-Silk said, the “millennials seem keener to push themselves forward”.

There is an onus, too, on companies to adapt to cultural changes rather than expecting women to adapt to a male-dominated status quo, said Webber. “If companies do not sort out their values, they will not be able to recruit anyone from the next generation.”

The day’s final session saw a panel made up of Metrosoft CEO Janusz Lorenc, Calastone CTO Adam Belding and Oracle’s global head of solutions, Richard Clarkson, discuss future technology. And as important as new technology is, it loses its importance if certain business issues are ignored.

Belding said that data integrity and the ‘garbage in/garbage out’ principle remains as valid as ever, for example, while Lorenc concluded that unless investors are engaged and given access to the fund range they want, the technology is irrelevant.