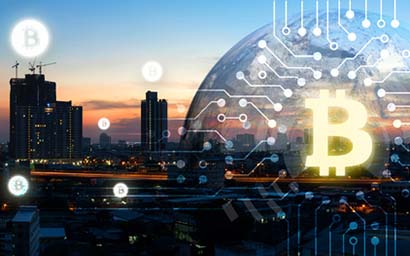 Asset managers should up their investment in blockchain technology in order to realise its benefits and not let the sell-side dictate how the technology develops.

The development of distributed ledger technology (DLT) has thus far been dominated by sell-side institutions and infrastructure providers. Meanwhile the majority of buy-side firms have been spectating from the sidelines. This is not surprising, given that the sell-side has always led in terms of technology adoption and development and has deeper pockets when it comes to technology investment. However, there are some that believe the disproportionate level of investment means that the sell-side is dictating the direction of travel and setting the blockchain agenda.

Consequently, asset managers and other buy-side participants need to up their game in order to take advantage of the digital transformation promised by the potential of DLT and the opportunity to cut costs and improve efficiency.

Investment in DLT to date exceeds $1.5 billion (€1.3 billion) and increased by roughly 60% between 2015 and 2016. At the same time, overall fintech investment reduced by nearly half, from $47 billion in 2015 to just $25 billion in 2016. And while there may undoubtedly be some hype around blockchain, there is no doubt that there is some real value there for asset managers, say some.

Failing in its mission
Fee pressures on asset managers are coming hard and fast from both regulators and governments, says Patricia Regnault-Fouqueray, head of asset management Europe, Linedata. “on nearly every parameter around fees and competition, the FCA has said that the industry is failing in its mission to give value to savers. The reality is that legislation  will be forthcoming if it’s not resolved. in this context, DLT is one of the few tools on hand to re-engineer the cost base,” she says.

Distributed ledgers give asset managers the potential to take out intermediaries that can cause delays and additional layers of costs, says Regnault-Fouqueray. “unlike the current model of centralized transactions, cryptology allows parties to carry out peer-to-peer financial transactions without the need for validation from a trusted third party, reducing costs and complexity.” 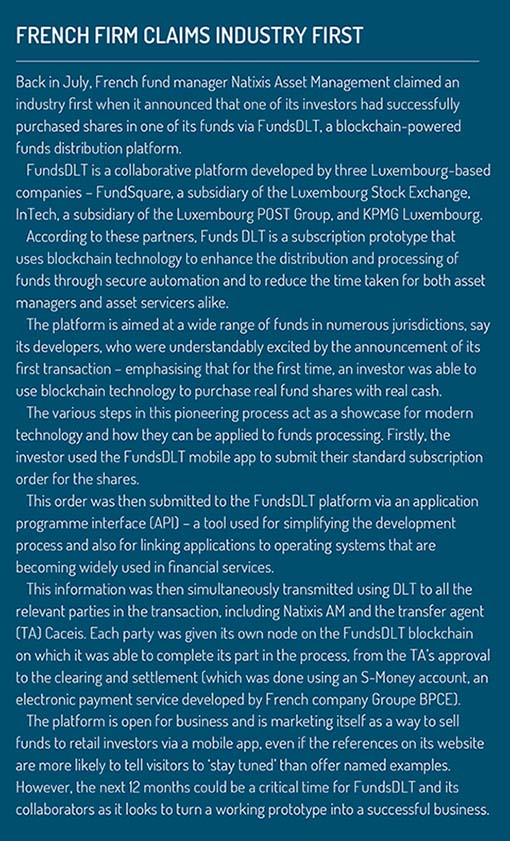 Selling points
One of the clear benefits of blockchain-enabled funds distribution is the ability to simplify the trading process and deliver information almost instantaneously with smart contracts, says Regnault-Fouqueray.

“The technology also ensures that individual distributed ledgers are kept identical and in sync,” she says. “providing the same data records reduces the need for reconciliations, parallel maintenance of data and the processes run on that data, for example anti-money laundering and know-your-customer checks. it also gives the ability to recover data from the parallel ledger and helps detect and protect against hacking.

So, what is holding everyone back, asks Regnault-Fouqueray. “One of the main corporate barriers to the adoption of DLT is the lack of a clearly defined risk-reward outlook. There are still high costs associated with implementing the technology, and on top of that there’s the expertise and knowledge required to deal with the complex software. These skills come at a cost and are in short supply.” 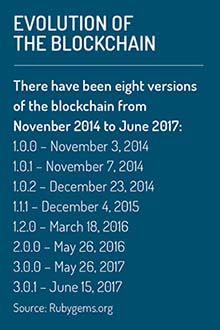 Despite the hype around the potential of blockchain, it’s still not a proven technology and needs to mature in security, scalability and performance, she says. “Mistrust remains widespread across the industry, with ongoing uncertainty around how it works and lack of awareness of the benefits.”

Another challenge is that there is no regulatory framework or industry standard for the use of blockchain, despite increased interest from the regulators. “Instead companies are working individually on implementing the technology, with mixed regulatory approaches across different jurisdictions. In order to encourage wider adoption and reap the benefits of the technology, broad industry collaboration is needed to overhaul the regulatory and legal framework and create a new standard.”

There are signs that this could well occur. The UK’s financial conduct Authority recently released its feedback on the potential uses of the blockchain and DLT in financial services and any regulatory concerns it may have. And while there may be clear advantages to a national supervisor setting its blockchain stall out early, the challenge is having all the different national supervisors aligned in their DLT rules and regulations.

A familiar pattern
In many ways, international regulatory alignment is the biggest challenge for any new technology, along with the development of consistent industry standards among the various vendors and market participants.

There is a familiar pattern to the evolution of new technology.

First comes the hype, then come the industry working groups and collaborative pilots and proof of concepts, and then the big players head off on their own once they feel they have developed enough skill and scale to no longer rely on collaboration – cue a battle for supremacy among numerous interoperable offerings.

The blockchain, just one example of DLT, has itself been through eight different versions between November 2014 and June 2017 (see box, above). Regnault-Fouqueray emphasises that buy-side firms must up both their investment and involvement in DLT initiatives to realise its Potential. “DLT is arguably one of the most prominent digital technology challenges today, and asset managers stand to be the main beneficiaries from disintermediation,” she says.

“We’re now starting to see proofs of concept and investment in fintechs; however, DLT is still an emerging technology and may take more years to reach maturity. To achieve its full implementation and re-engineer the cost base for the buy-side will require concerted involvement from stakeholders across the industry.”