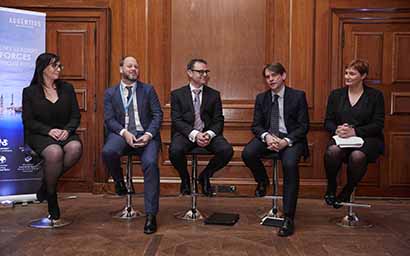 Brexit has left asset managers worrying about the distribution of UK funds into the EU – a topic discussed in depth at fund administration company SGG Group’s latest thought-leadership event.

While Brexit has brought much uncertainty to the asset management industry, it has nevertheless provided a boost to providers of third-party management companies in the alternative investment funds industry.

Although management companies – known usually as ‘ManCos’ and in the alternative investing world as ‘AIFMs’ – can be established by asset managers themselves, firms can also use third-party specialist providers, which includes SGG Group.

Put simply, a third-party AIFM enables a fund to benefit from the EU marketing passport for cross-border distribution in Europe and can be a quicker route to market than for a firm to establish its own entity or use national private placement regimes.

At the time of writing, managers with their bases in the UK are set to lose their EU passporting rights after Brexit, so many are relying on third-party AIFMs in the EU to maintain market access.

A third-party AIFM aids the ongoing operational processes of a fund and demonstrates to regulators and investors that the fund is supported by the necessary infrastructure in the EU.

SGG Group, in association with Funds Europe, recently hosted a thought-leadership event where practitioners from business consultancy EY and law firm Proskauer joined the company to consider Brexit responses by asset managers who have their main European operations in the UK.

“Managers are wondering how they will continue to market into Europe after Brexit, and then thinking how they will structure,” said Kate Simpson, partner at Proskauer. Smaller managers were more likely to consider third-party providers as a route into the EU, or to maintain their existing EU link post-Brexit, she said.

Smooth transition
Ian Kelly, UK and Ireland managing director of SGG Group, said that a ManCo was usually an easy way for a firm – such as a private equity practice that might be more used to a less regulated environment – to transition to a regulated EU environment and, although some firms might subsequently choose to build up their own infrastructures, some in fact stay with the third-party provider for many years afterwards due to the flexibility it gives them.

Relevantly, Shaun Collins, CFO for Asia and Europe of global alternative investment firm Apollo Management International LLP, was also on the panel. Apollo operates a number of UK and EU regulated firms, including an alternative investment fund manager (AIFM) in Luxembourg and also uses a third-party ManCo for certain products.

Having this range of operational structures gives the firm options in dealing with Brexit, said Collins.

“The way we’ve approached this in Europe is to look at key markets – the 16 or so countries we do business in now – and look at them across the spectrum of distribution, clients, execution, portfolio management, and to really think about what would happen on day one of Brexit to stop us from doing what we already do now.”

He said Apollo had established Luxembourg as its European operational centre and expected to hire more staff there.

“One of the things I’m certainly thinking about now as we hire people is whether we should hire them in Luxembourg to do the role there, as opposed to London or elsewhere,” he told the audience at the SGG event. Roles the firm would hire for will be conducting officers – a ‘substance’ necessity in Luxembourg – and risk and valuation functions.

James Gee, an associate partner at EY, said asset managers had been setting up ManCos or AIFMs in Europe on the assumption that the delegation of certain allowable fund mangaement roles back to London such as portfolio management would continue after Brexit.

The European Securities and Markets Authority (ESMA) recently confirmed it would agree a memorandum of understanting on delegation with the Financial Conduct Authority (FCA).
Even if things went horribly wrong, said Gee, regulators, particularly in Luxembourg or Ireland, would find a way to allow delegation to continue after Brexit. There was no way those portfolio management teams could be moved to the EU by April 1, he said.

Habiba Boughaba, general counsel of SGG Group in Luxembourg, said such delegation arrangements were subject to certain conditions, such as the AIFM that delegated function to third parties having to notify their home member state before the delegation arrangements became effective. There must also be a cooperation agreement between the competent authority of the home member state of the AIFM and the supervisory authority of the entity who is to carry out the delegated services.

“As the UK will be considered a ‘third country’, ESMA has indicated that the negotiation of such agreements is being coordinated by ESMA with the FCA, and Luxembourg’s CSSF confirmed on January 25 that it shall have cooperation agreements with the FCA in the UK for March 29. This means reassurance for asset managers that the delegation of portfolio management back to a UK asset manager will be possible, as if Brexit had not happened,” said Boughaba.

Evolving solutions
But delegation does not solve the wider problem of fund distribution in the EU. For this, third-party AIFMs/ManCos are not the only solution. Some larger firms may already have an entity in the EU they can leverage, noted Simpson, while SGG’s Kelly said: “We could see very similar structures to the US where there are onshore structures there and feeder structures in Europe. All of this will be negotiated as part of the Brexit regime so we could see more structures in play than potentially less.”

At present, though, the direction of travel for firms that already have distribution interests in the EU is emphatically to build substance in the EU, mainly in Luxembourg or Ireland.

Doing so entails firms either moving people or recruiting locally.

Collins of Apollo said: “Practicality-speaking, there will be a war for talent in those spaces and it will be interesting to see how the third-party ManCo business will react to that to see if they can provide certain of the services, if not all.”