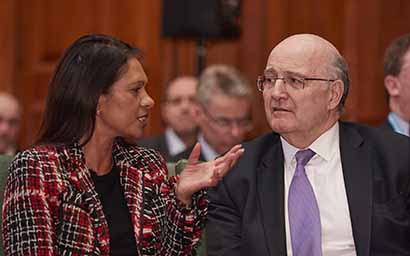 Their views on Brexit are poles apart, but Gina Miller and Roger Bootle agree that the UK’s withdrawal agreement is next to worthless. Nick Fitzpatrick reports from an SGG Group event run in partnership with Funds Europe.

Pro-Leave economist Roger Bootle and Remain campaigner Gina Miller – the investment entrepreneur who legally challenged the government to gain parliamentary approval for Brexit – have derided the British government’s negotiating skills and the withdrawal deal of prime minister Theresa May.

The two high-profile Brexit figures found themselves agreeing about the UK government’s withdrawal deal during a debate on the EU departure at a funds industry event in January.

“If I was [in parliament and] offered the choice between Mrs May’s deal and staying in the EU, it would not be obvious which way I should vote,” Bootle – who writes pro-Brexit articles in the Eurosceptic Daily Telegraph newspaper - told the London audience.

He described UK officials as showing “idiocy” in the Brexit negotiations by “trying to be nice” over issues such as defence to an inevitably far more steely EU; while Miller said the deal would lead to “servitude” due to the government’s decision to maintain a ‘common rulebook’ with the EU after Brexit.

The rulebook, which contains harmonised standards for goods and trade, caused the resignation of the UK’s former Brexit secretary, David Davis.

Miller said: “If you look at the ‘common rulebook’ that’s in there and the alignment, mutual recognition, we basically just have to nod our caps for the rest of however long it is that we are in the EU … We’ve given away just about everything.”

Bootle said he doubted history would remember the UK prime minister who tabled the EU referendum – David Cameron – favourably. Similarly, Miller said the referendum had been called to “mend” the Conservative Party, which has divisions over EU membership, and was not in her view anything to do with the interests of Britain or its people.

At the start of the debate, both were asked to restate their arguments for Leave or Remain. Bootle, who founded and heads Capital Economics, said politics, more than economics, was the most important reason for leaving, as it would give Britain back political control and improve the political debate. It’s about how the UK is governed.

Greater political alignment had been written into the Treaty of Rome since the beginning and “our politicians and our people should have realised it”, while increased political integration would involve the UK losing influence and “various opt-outs”.

Intertwined
Declining to restate her original Remain position, Miller said she preferred to focus on a pragmatic solution – which would be hugely difficult, given how EU rules were enmeshed into the fabric of the UK. Explaining this, she said the referendum was carried out on a “very shallow understanding” of how Britain had integrated itself in the EU for 44 years, because “we weren’t just a member of the club, we’d actually intertwined every part of our lives in that time [and] we had made decisions about the way our country works”.

Decisions included selling dockland warehouses to build “lots of expensive flats” and turning out-of-town warehouses into shopping centres or business parks “because we would not have to hold goods”.

As well as this, decisions that affected 142,000 businesses who only exported to the EU had been made with assumptions they did not need specialist knowledge of trading rules, because there would be standardisation and no trade barriers.
“We are faced now with trying to understand how to take an egg out of an omelette,” Miller said. It is “utter chaos” because legislation nationally and internationally was predicated on a deal with the EU, with nothing prepared for no deal, and in part because it would be legislatively impossible to get all the changes needed through in time.

Even if the economy is secondary to politics for Bootle, the encroachment of politics in the EU project is a hindrance for economic development, as he sees it. The EU economy has been “bad” in recent decades because of “bad institutions – institutions don’t work; silly objectives – harmonisation, integration, union. You won’t catch … rapidly growing economies of the East being fooled by that lot”. He singled out Italy for having “next to no growth” since the euro was formed in 1999 and said Britain had economically outperformed all euro countries except Spain.

Miller is “no fan of the euro” but said she also questioned Brexiteers over their views that political sovereignty was a key issue. In part, her argument rested on about 12% of British legislation originating in the EU and the large influence British civil servants and others had in writing it.

The debate also touched on financial services. Bootle said the UK may see a “minor” loss of some financial services, but quipped that Frankfurt was “shimmering like Croydon” in reference to the German city’s competitive threat to London.

Croydon is a suburb of London famed for its supposed ultra-pedestrian character. Dubai, New York, Singapore and other locations outside the EU were the real rivals, but London’s advantages were “massive”.

Miller said recruiters were finding it very difficult in the current climate, with London seen as not welcoming to EU nationals. She added: “A lot of the people who are doing fantastic programming in financial services, in digital, come from the EU.”
Claiming that Brexit had revealed racism and sexism, she said: “I worry about our reputation in the world, because the other thing that’s happened, I think, is Britain has been seen as being reasonable, clear-headed, tolerant … and now I go around the world and people go, ‘What’s happened to you guys?’”

Touching on immigration, Bootle praised the EU’s decision to allow former communist countries to join. But it had been a major mistake not to consider ending free movement of people as the nature of the Union changed. “What works for six countries – six countries in Western Europe with a strong democratic tradition and a high standard of living and GDP – does not work for a Union of 28 with such diverse characteristics and huge differences in GDP per capita. That is the source of the immigration issue in this debate.”

In the 1975 referendum on UK membership of the European Economic Community, Bootle voted to remain. He said: “I don’t recall any dispute at that stage about people coming to work in this country … for the simple reason that what was involved was pretty much an equal exchange of people...”

He said he was surprised how much he agreed with Miller. The two also agreed that Brexit was not the most important issue facing the UK and that talking about the topic meant politicians were focusing less on other issues.

“Roger and I said can we just stop talking about Brexit, because no one is looking after our country,” Miller said.