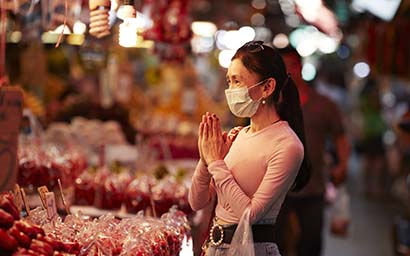 A widely held view is that emerging markets, particularly some in Asia, managed the impact of the coronavirus pandemic better than the developed markets of Europe and the US. They were able to avoid long periods of lockdown and their stocks led the recovery in global markets.

For example, Chinese industrial production returned to pre-pandemic levels by mid-2020, while China’s exporters bounced back over the past year. As a result, China’s economy is predicted to grow by 8.2% this year, compared to 1.9% in 2020, while the Eurozone is expected to grow 5.2% in 2021, after an 8.3% fall last year, according to Joseph Mouawad, a fund manager in the international bonds team at Carmignac.

“Emerging markets, broadly speaking, have dealt with the pandemic better than developed markets in the sense that there’s been less fiscal stimulus, so they’ve spent less and ended up with better GDP performance. They’ve had lower contractions, or in cases like China, they have managed to grow despite having spent less money on the problem,” he says.

Niraj Bhagwat, a partner and equity portfolio manager at Wellington Management, agrees. “If you look at the balance sheets of Asia, governments have not spent money by writing cheques to people, but will be spending more on capital expenditure, which is much better in the longer term, so their balance sheets are more protected,” he says.

Fund managers believe these improved economic fundamentals might help companies from emerging markets generate higher earnings and boost their share prices, enabling them to get out of their decade-long underperformance compared to developed markets. While much of the underlying underperformance of emerging market assets was due to a strong dollar, spending proposals totalling US$6 trillion (€4.9 trillion) from the Biden administration are conducive to a weak dollar. This means that emerging market countries, such as China and Mexico, the US’s biggest trading partners, will be the big winners as their exports may grow.

Young, growing populations
Emerging markets have about 80% of the world’s population and 90% of the world’s expected growth over the next few decades. “Asia is an interesting place for future growth, as half of humanity lives here and a bulk of those people are very young, so if you take countries like India, Indonesia or Malaysia, between 30% to 50% of the population is below the age of 30,” says Bhagwat. “A large, young population makes it a dynamic place to invest money and grow faster than the rest of the world,” he adds.

He says rising income levels have meant countries such as Indonesia, India and China are already consuming more and are able to afford better-quality products.

“Valuations have already recovered quite a lot from their lows of the first quarter of 2020, but we see a trend of strong, broad upwards earnings revisions around Asia,” she says. “The longer-term story is still intact, as factors such as the rise of the middle class and lifestyle upgrades play increasingly significant roles in Asia’s markets.”

Kwok believes the trend of higher consumption and increased spending should have a positive impact on corporate earnings. “We think growth will persist, and that the positive structural stories that we see in Asia will continue to play out over time as the population gets wealthier, and as companies continue to innovate,” she says.

Tech stocks winners
Technology companies have been the obvious winners from the structural changes to society throughout the pandemic, and fund managers have increased their allocations towards this sector.

“Last year we had a preference for north Asian countries, because the indices there are highly exposed to tech stocks,” says Alistair Way, head of global emerging market equities at Aviva Investors.

However, instead of big technology companies, he finds emerging market equities in the small to mid-caps interesting. “The emerging market investment universe has been dominated by some big companies, like Tencent, Alibaba and TSMC [Taiwan Semiconductor Manufacturing Company], which are all great companies, but some are looking less attractive in comparison to smaller companies.”

With the collapse of hedge fund Archegos impacting no fewer than six banks, Way notes a dramatic decline in some Chinese internet companies, such as Baidu. “Although I did not like these companies at their peak, following the recent corrections of 30% to 40%, we’ve started to find them attractive, as the share price is down to distressed selling rather than weak fundamentals,” he says.

He is currently bullish on South Korea and notes that a number of companies are making strides to cement their positions globally. “We like memory semiconductor companies, such as Samsung, Hynix and a small company like Wonik,” says Way.

Renewables
Fund managers are also excited about the shift by governments and consumers towards renewable energy and electric vehicles and believe that Asia is well positioned to benefit.

“As the world moves away from oil to electric vehicles and renewable energy, Asia will benefit because if you look at where oil comes from globally, it is the Middle East, Africa, Latin America or the US – and Asia is generally an importer,” says Bhagwat. “But if you look at electric vehicles, the biggest supply chain is in Asia, which is the biggest producer of batteries and components.”

The shift towards renewable energy and low oil prices is also leading asset managers to take a bearish view on the Middle East, Latin America and Russia. “We are under-represented in Middle Eastern countries like Qatar and Saudi Arabia,” says Aviva’s Way. “We are struggling to find attractive stocks, as their markets are still reliant on the fossil fuel industry, the ESG performance of companies is low and there is a lack of female empowerment.” The portfolio managed by Way currently has more exposure to Asia than the Middle East or Latin America.

In addition, Asia tends to be less volatile than the rest of the emerging markets as they comprise commodity producing countries, such as Russia, the Middle East, parts of Africa and Brazil. “Given what’s happening with oil, we believe these countries are not well positioned,” says Bhagwat. “Moreover, in countries such as Russia, Eastern Europe and Chile, the demographics are not conducive to growth, as they are ageing countries.”

However, Carmignac’s Mouawad says that planned infrastructure projects in Asia, Europe and the US will mean a rapid rise in commodity prices. “As a consequence, you will see Latin American countries such as Peru, which exports copper, and Brazil, which exports iron ore, benefit,” he says. “Commodity-driven African countries, such as South Africa, or oil exporters such as Nigeria or Angola are expected to gain.”

Inclusive finance
As financial inclusion continues to rise in Asia and more small, medium and micro enterprises and people benefit from financial services, fund managers are bullish on the prospects for this region.

“Take India, where the undeveloped local financial services market is dominated by private and state-owned players, and some well-managed private financial institutions continue to seize the market share of state-owned enterprises,” says Kwok. “Looking ahead, not only is the private sector’s market share expected to expand, but the entire size of the financial services market will also increase.”

“Financial penetration in Asia is low,” adds Bhagwat. “For example, in India, mortgage penetration is less than 10% and household debt is one of the lowest in the world, similar to other ASEAN countries.”

When it comes to Covid-19, countries such as China, Hong Kong, Taiwan, South Korea, Singapore and Vietnam have managed the pandemic exceptionally well. However, cases are rising rapidly in India (at the time of writing) and to a lesser extent, Malaysia, the Philippines and Indonesia as the second waves that Europe and the US faced last year manifest in Asia.

Fund managers are mostly unfazed. “In India, there is some weakness, but fund managers are taking a three to five-year view because of their memory of last year, when there was a terrific rise of the Indian stock market and they missed the bottom. No one wants to miss the rally again,” says Bhagwat.