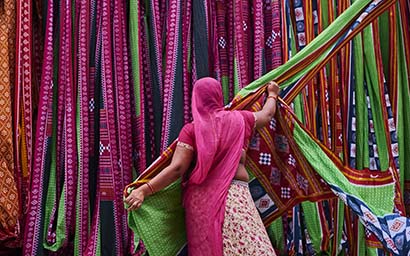 The 200 billion rupees will aid a proposed $1.5 trillion (€1.2 trillion) in infrastructure projects, as India seeks to boost economic growth by increasing spending on roads, ports and energy. Sitharaman said she expects the institution “to raise up to 3 trillion rupees in the next few years”.

“The government’s focus on boosting growth through increased capital expenditure is a positive,” says Amit Goel, portfolio manager of the India Focus Fund at Fidelity International, which has €1.6 billion of assets under management.

Goel believes that the DFI will ensure no project delays, on account of both funding challenges and reduced execution risks.

Boom-and-bust cycle
India plans to spend up to 111 trillion rupees over the next four years on infrastructure projects to lift its economy from the impacts of the Covid-19 pandemic, which led to a recession. The Indian government’s target is a $5 trillion economy by the mid-2020s through investment in infrastructure and renewable energy. This massive infrastructure boom is welcomed by fund managers.

“India’s infrastructure has always been chronically underinvested and this has not only slowed the country’s potential growth rate but also increased its economic cyclicality dramatically, which has in turn prevented high levels of foreign direct investment because of economic volatility,” says David Cornell, managing director of the India Capital Growth Fund at Ocean Dial.

“For example, the economy goes on a growth spurt, but the infrastructure isn’t there to support it, so you get this inflationary response due to too many goods not chasing enough supply. As a result, the economy has to slow down, and there’s this boom-bust cycle.”

Besides the DFI, he believes there have been a series of moves by the government which have encouraged infrastructure expenditure. “India as an economy is much more open than it was 25 to 30 years ago. The cost of financing is coming down,” he explains. “It's getting a lot easier to do business in India, it’s more transparent and there’s less corruption.

“With the cost of capital coming down, there’s more appetite to invest than there has been in the past,” Cornell adds. “The government has ditched the private partnership model and is evolving the model on a sector-by-sector basis to ensure that the private sector is incentivised sufficiently to come in and invest.”

Avinash Vazirani, fund manager of the Jupiter India Fund at Jupiter Asset Management, notes that the Indian government is selling off infrastructure to free up capital to be reinvested in infrastructure. “We have seen the sale of seven airports and they’re reinvesting that money,” he adds.

“Not only will infrastructure spending provide jobs and provide an economic boost in the short and medium term, but this will create infrastructure for the long-term.”

Competing with China
Prime minister Narendra Modi announced last November that India’s renewable energy capacity – which includes solar, wind, biomass and hydropower – will grow from the current 136GW to 220GW by the end of 2022, requiring an annual investment of $20 billion a year. By 2030, the country aims to reach 450GW of renewable energy generation.

Demand for domestically produced solar cells and modules will increase to 36GW over the next three years, said Modi. India currently imports more than 85% of its solar photovoltaic (PV) modules from China and has little manufacturing capacity.

“India imports a lot of oil and gas and, to a certain extent, solar PV modules from China, so investing a lot more into renewable energy will help reduce imports and that’s a positive for the current account deficit,” says Daniel Fitzgerald, a portfolio manager in the real assets team of Martin Currie. “It’s conceivable that India could get down the cost curve in solar and you could see a reasonable competitor to China.”

A growing population is leading to a growth in power demand in India, and Fitzgerald believes India is taking steps in the right direction.

“If you look at power demand in India in the last six months, it has been growing around 5% and is expected to continue,” he says. “You see a rapidly growing middle class beginning to consume more and this leads to more power demand for which you need to build more generation capacity. Renewables make sense because India has immense solar and wind potential.”

According to the International Energy Agency (IEA), on a per-capita basis, India’s energy usage and emissions are less than half the global average. India is expected to add capacity the size of the European Union to its installed base over the next two decades, with solar and wind making up three-quarters of this additional generation, as costs fall.

Covid-19: a short-term blip
Although India has seen a surge in coronavirus cases and the country’s additional capacity in 2020 fell by more than 50% from a year earlier, it will set “new records for renewables expansion in 2021 and 2020, as delayed projects from previous competitive auctions are commissioned”, according to an IEA report released in May.

The April 2021 rise in Covid-19 cases has created only short-term forecast uncertainty for this year.

“We are positive on India and we are seeing attractive dividend yields from real asset companies,” says Fitzgerald. “When we are investing in real assets, we look at levels of urbanisation and population growth and that’s where India is doing well. There are more people on toll roads and retail shopping centres and more demand for automobiles.”

Martin Currie currently has holdings in the large Indian hydropower player, NHPC. “This is a group with significant renewables capacity in India and when we look globally, this is one of the cheapest renewable energy asset names we can see anywhere,” says Fitzgerald. “It is going to grow a lot over the next few years based on the projects it’s about to complete.”

Another company he’s bullish on is Power Grid Corporation of India, India’s dominant power transmission company, which connects solar installations to the grid and is likely to benefit from increased capacity.

Meanwhile, Ocean Dial’s Cornell prefers to invest in equities with exposure to infrastructure or renewables. “We want to invest in parts of the market where we have complete confidence in transparency and in India we find where the government is involved, we’re never clear on how business is secured,” he says.

“So, we tend to invest in a second derivative than the main sector and we’re heavily invested in cement in India, which is a clean and low-risk business. There is definitely an increase in the demand of cement as the infrastructure build-out gathers momentum.”

Risks to renewables
Despite the short-term uncertainty created by the coronavirus pandemic, fund managers are optimistic about India’s ability to become a global renewable energy manufacturing hub. “Given the scales of investment already made and the opportunity that exists, we think India is on its way to becoming a hub of renewable energy investment,” said Jupiter’s Vazirani. “We see the cost of renewables is coming down significantly and the fact that the government has given lots of incentives for the manufacturing of equipment for renewable energy locally, the risks have already been minimised.”

The main hurdle in this sector will be macroeconomic, he notes, but adds: “Our view is that the momentum will continue because it’s already cheaper, for example, to have rooftop solar than the cost of transmission in certain parts of the country, so it makes economic sense and the risks are mitigated.”

Fidelity’s Goel believes there may be some project delays due to the pandemic. “But even if we stretch the period to eight years, it will still drive strong growth in infrastructure and lead to a positive second-order rise in manufacturing and employment generation, which is the basis of our medium-to-long-term positive view,” he says.