Fund managers with low-cost passive products may find a whole new vista open to them in the UK retail market less than a year from now, reports Nick Fitzpatrick.

David Ferguson, the chief executive of fund platform Nucleus, would invite the late punk rocker Joe Strummer around to dinner, if he could. The guitarist/singer in The Clash, who died ten years ago, was a leader of the punk movement that changed music and fashion in the late 1970s.

With a not too dissimilar desire from punk to challenge the status quo, Nucleus entered the UK’s fund distribution industry in 2006 with a platform business model that did not levy fees on fund managers whose funds Nucleus sold.

Payment of fees, commissions and rebates to platforms has led to suspicion that product offerings from platforms may be biased either in favour of higher margin arrangements with fund managers or, if they have one, a platform’s own internal fund management business.

Since 2006, the Financial Services Authority (FSA) has conducted the Retail Distribution Review (RDR) with the aim of making the pricing of funds distributed through intermediaries – which also includes independent financial advisers (IFAs) – more transparent. The RDR will not lead to a standard pricing model and platforms do not have to follow Nucleus by ending rebates, fees or commissions. But it is causing some of the larger and longer established platform players to unbundle pricing so that customers can more clearly see how much they receive for selling a manager’s funds.

“The biggest change is from bundled to unbundled pricing,” says Ferguson. “Most IFAs, platforms and asset managers have failed to disclose pricing in the past, but the big ‘supermarkets’ are now moving towards unbundling.”

Price squeeze, passive expansion
The RDR regime will come into force on 31 December but the transparency of costs that it brings is already squeezing prices. A key result of this is that more platforms will make passive products available.

Ferguson says that Nucleus – which is used by IFAs – has 30% to 40% of its assets in passive products and that this is partly made possible by its pricing structure, which charges its users a platform fee equal to 35 basis points of funds.

Low annual management charges are thought to have held back the success of cheaper investment products in the retail market, particularly exchange-traded funds (ETFs). It is perceived widely that platforms that charge managers a fee to sell their products did not sell these funds because they could not make enough margin out of the percentage they would have received from the fund’s annual management charge. Either that, or low-cost product providers could not afford to offer fees or commissions. A greater emphasis on charging customers a flat rate rather than levying managers with a fee should reduce this anomaly.

As a sign of how product shelf space will change, Cofunds’s move to a pricing structure based on an annual platform fee and low management charges will see it add new products and even a share dealing service to its offering.

“A key outcome [of unbundling],” says Verona Smith, Cofunds’s head of propositions, “is that we can offer new assets and shares to customers. It has been hard to offer certain passive funds because there is no remuneration from the AMC [annual management charge].”

ETFs and the low-cost fund range from Vanguard Asset Management are two examples of products she cites that could become more viable.

Nick Dixon, marketing director at Skandia, agreed that the RDR would accelerate the movement towards passive and believes by 2015 one-third of platform products will be invested in passive funds.

Suspicion and trust
Because customers cannot always easily tell how much fund managers pay to platforms for selling their funds, some people suspect a “pay to play” model exists, causing platforms to be biased towards more profitable, typically active business even though this might not be in the best interests of consumers.

Some of that suspicion centres on rebates, which are another type of transaction that can take place between a platform and a manager when a fund is sold.

In its Policy Statement 11 09, the FSA noted that IFAs had “made the point that some platforms are not always forthcoming with the information the adviser requires, particularly around the size of the rebate the platform receives from the product provider”.

RDR now sees the FSA call on IFAs to be transparent about pricing, be more discerning in the selection of platforms they work with, and it also requires platforms themselves to be more fee transparent.

The regulator is also consulting on the future of rebates.

The RDR has mainly centred on IFAs with the aim of instilling UK consumers with confidence in the financial adviser industry. Mis-selling scandals have hit the advice industry periodically. Perhaps most harmful among these given the strenuous efforts by UK governments in recent years to encourage more pensions take-up was the personal pensions mis-selling controversy in which the relative weight of commissions paid by product providers played a large role in IFAs selling inappropriate retirement vehicles to people.

RDR will end IFA commissions for new business in favour of transparent fees, and require higher levels of qualifications for advisers.

The RDR does not explicitly forbid platforms from receiving commissions or fees from investment firms, only that they be transparent about it in order to rule out platform bias as much as possible.

Margins
Though all this may mean lower fees for customers it is leading platforms into an era of lower profitability, too.

Dixon, at Skandia, believes the industry will find itself selling products for a 29 to 50 basis points margin, and that this will drift down even further over time.

Kevin Bonar, head of middle office and wealth management at Citi, says: “The industry could go to a 30 basis points environment over three to four years, according to people we have spoken to.”

Smith, at Cofunds, foresees a 29 basis point world. “That’s what it might cost in future.”

Ferguson at Nucleus, says: “Prices for customers have probably been as high as 60 to 75 basis points in the not too distant past. I can see prices coming down to between 35 and 40 basis points and then 30 in the longer term.“

The future may mean less profitability for platform providers, at least in the short term, and some are expected to leave the industry, while others will build on opportunities among corporate pension plans and institutions. Yet RDR may also lead to greater opportunities for low-cost fund providers like ETF firms.

But most importantly, it could lead to funds so cheap that grown-up punk rockers can do what the generation of hippies before them has long since enjoyed: building investment portfolios.

“Most asset managers have significant and wide distribution and so if fees go down it will be moreexpensive to have sales people around the country. Yet to distribute successfully through platforms, you need significant numbers of sales people.”

Mirabaud is a Swiss fund management company working on expanding its UK business. Blair, formerly of Skandia Investment Group, along with Paul Boughton, formerly of Neptune Investment Management, are both recent UK hires tasked with building up this business.

Blair says the winning managers will be those with “repeatable and big” alpha, which are most in demand from IFAs.

This appears to be particularly important given the access that platforms will give to passive vehicles and the use that wealth managers could make of them to protect their advice fee.

David Young, associate director at Navigant Consulting, says: “As fees will have to be disclosed, wealth managers will want to protect their advice fee and also not put fees up for their customers. Therefore, when doing strategic asset allocation, they will look at passive options to keep their manufacturing costs down.”

But Karen Bond, also of Navigant, says managers with strong brands that are “must-haves” for platforms will be in a strong negotiating position. Negotiations taking place over price are fierce. “Platforms have margin issues and are looking to take some costs out from fund managers. They are negotiating hard with them.”

A future for outsourcing
The profitability of platforms is likely to depend on a mix of scale, operational efficiencies and good client service, says Nick Dixon, marketing director of Skandia, the UK’s largest platform, as industry profit margins face pressure after the RDR rules take hold.

“Margins will be compressed and I think the first thing we all need to do is build scale because a reasonable profit can be made with low margins if scale is substantial,” he says.

About £20 billion (€23.8 billion) separates the top three providers (Skandia, Cofunds and Fidelity’s FundsNetwork) from the next largest, according to the latest available ranking of platform assets from The Platforum (September 2011).

So what is the hope for smaller providers, such as Nucleus, which had £3.03 billion of assets at the same date? Partly, it may lie in outsourcing.

“[Through outsourcing] we get greater automation and economies of scale,” says David Ferguson, Nucleus’s chief executive. Nucleus, founded in 2006, outsourced operations to Scottish Friendly Assurance’s wrap administration business, as did Aviva, which has £600 million of assets. 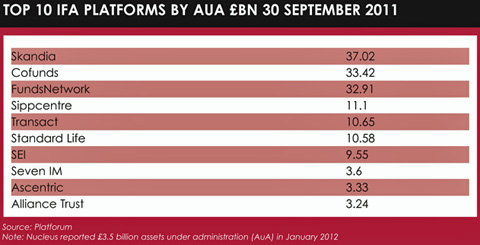 Even better for these firms, Citi bought Scottish Friendly’s wrap administration capability last year in a sign that large investment service providers see a role to play among fund platforms in the RDR world.

Citi, the US retail and corporate banking business which has a large servicing unit for investors, planted possibly the first flag by a large outsourcing service provider in the UK platform market with the purchase, says Kevin Bonar, head of middle office and wealth management at the bank.

The deal rings of the “land grab” made by investor service businesses into the fund management world over the past decade or more, whereby “lift outs” of operational staff and technology from fund managers were used to build core operating platforms and wire in other clients. Banks also started to cross-sell services from other parts of their businesses, such as foreign exchange, and with this they potentially provide platforms a means to build internationally.