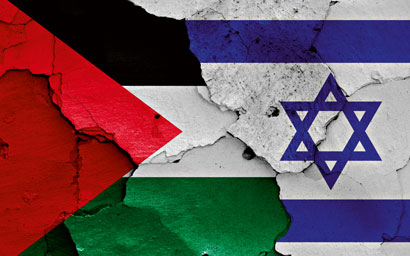 Following the FTSE upgrade of Palestine to frontier market status, Fiona Rintoul speaks to Palestinian and Israeli investors who let business rather than politics lead them.

“They tend not to see the map through politics; they see it through economics,” says Mashiah, who founded ME Links, a company that promotes business relations between Israel and its neighbours.

Part of Mashiah’s mission at ME Links was to persuade Israelis that investing in the Arab world, including Palestine, was as good for them as it was for their neighbours. “You don’t want an unstable neighbourhood,” she says.

Such thinking is also championed by the likes of Amelia Investments & Holdings, run by Chemi Peres and Assaf Shariv. Amelia provides capital and support to entrepreneurs and joint ventures that further regional collaboration and economic opportunity. Its markets include Israel and the Palestinian Authority, Jordan, Egypt, Turkey and the Arabian Gulf.

This year, the practical business case for investing in Palestine in particular received a considerable boost. In September, index provider FTSE Russell promoted Palestine from ‘unclassified’ to ‘frontier market’ status.

“It’s a milestone in improving visibility and credibility,” says Amany Dahir, head of investor relations at Siraj Fund Management Company, a Ramallah-based fund manager founded in 2011 to manage investment funds in Palestine. “When you mention Palestine, conflict and volatility come to mind, but our market is quite stable.”

But not everyone is convinced of the business case for investing in Palestine – or even of the utility of Arab-Israeli co-operation. For some, the latter is anathema, as Mashiah discovered as a founding member of the Israeli-Palestinian Chamber of Commerce.

‘”It was even hard to register this thing,” she says. “After we got the permit, we tried to bring together people from both sides.”

COMPLICIT IN OPPRESSION?
Also in the mix is the Boycott, Divestment, Sanctions (BDS) movement, which urges investors to divest from companies it believes are complicit in oppressing Palestinians. Thus, in 2011, Triodos Bank excluded Dexia from the Triodos sustainable investment universe because of its ongoing financing of Israeli settlements in the occupied Palestinian territories. In 2014, PGGM, the largest Dutch pension fund, withdrew all its investments in Israel’s five largest banks because of their involvement in the West Bank.

In the past couple of years, the situation has been further politicised by US and UK government moves to boycott the boycotters.

In 2015, Illinois became the first US state to ban its five state pension funds from investing in companies that boycott Israel.

Is it possible to search dispassionately for good investment opportunities in this environment, to be a practical business person? It may be. But because of the practical results of politics, the search usually leads investors to Israel rather than Palestine.

“We have looked at Palestine but have never invested there,” says Zin Bekkali, chief executive of Silk Invest, a frontier markets fund manager.

“We were happy to see that Palestine has moved into the FTSE frontier index, but unfortunately it remains one of the most illiquid markets.”

Israel, by contrast, is recognised as a developed market by both FTSE and MSCI and has a broad range of companies operating worldwide. The flagship BlueStar Israel Global Index (BIGI) comprises 112 stocks trading on five exchanges (Tel Aviv, Nasdaq, New York, London and Singapore). Daily turnover in Tel Aviv is $300 million (€281 million) with more than 400 listed companies. In the areas of high-tech and pharmaceuticals in particular, Israeli companies are global competitors and attract money on that basis.

“There is no particular demand for those markets, but in the case of Israeli high-tech companies, there is interest among those investors looking for innovative firms,” says Mark Mobius, executive chairman of the Templeton emerging markets group. “It’s really a matter of considering them as part of the global opportunity and particularly in the high-tech and pharmaceutical space.”

BlueStar Indexes, which develops and commercialises indices and exchange-traded funds (ETFs) on the Israeli capital markets and powers the only US-listed Israeli tech ETF, sees Israel as offering the best of both worlds to global investors. It believes Israel combines developed-market economic management with the favourable demographic trends, recently discovered natural resources and export-oriented economy of an emerging market.

“BlueStar has had interest in our TA-BIGITech index from all those types of investors.”

A DIFFERENT ROUTE TO PALESTINE
Investing in Palestine is harder work and perhaps requires a certain commitment. However, alongside the FTSE Russell upgrade to frontier market, recent fairly positive economic trends have supported the market.

“Economic growth is driven by consumption that is financed by credit and increased employment of Palestinians in Israel, with unemployment declining from 17.4% at the end of 2014, to 15.4% by the end of the third quarter of 2015,” says Ali Taqi, head of equities at Rasmala Investment Bank. “Overall activity is supported by the commissioning of reconstruction in Gaza with $3.5 billion pledged for Gaza to support reconstruction efforts.”

Rasmala runs a Palestine equity fund from its offices in Dubai. The fund invests in the Nablus-based Palestine Stock Exchange (PSE) set up in 1995. The exchange comprises 49 stocks, but more than 50% of the Rasmala fund is invested in just three companies, revealing a debilitating lack of depth on the exchange.

The PSE may have been awarded frontier market status by FTSE, but none of its companies yet qualifies for a standalone FTSE index. That’s one reason why some investors prefer to take a different route into Palestine.

“We believe that until there is more available free-float and liquidity in the key Palestinian companies, investors should consider a combined approach, including Jordanian companies like Arab Bank that are active in the Palestinian economy,” says Schoenfeld.

The obvious brake on the local market is politics. Companies that operate in Palestine are inevitably hindered by the political situation, limiting the investment opportunities.

“Reaching a peace deal with Israel will help unlock the true potential of the Palestinian economy,” says Taqi. “Any delays or obstructions to the progress of peace negotiations similar to what we have witnessed over the last five years will continue to impede economic development in Palestine.”

YOUTHFUL
At the same time, Palestine has a young, educated population. The investment opportunities are there – particularly among early-stage businesses – for those, such as Siraj and Palestine Investment Fund, who know where to look. Siraj sees opportunities in financial services, healthcare, industrials, agriculture and information and communications technology (ICT), as well as tourism, construction and engineering.

Sometimes it’s a question of working with what you have. ICT is a particularly interesting area, says Dahir, because it can be shared virtually. “We don’t have control of our borders, but there are no borders when it comes to these services.”

Also interesting is energy, particularly renewable energy such as solar. As well as potentially offering good returns, investments in this area help to create the more robust infrastructure that facilitates further economic development.

“Palestine is still a virgin market,” says Dahir. “There is a strong dependency on Israel for electricity and other resources such as water. Some 90% of exports go to Israel. We would like to see a change in terms of dependency.”

The road may seem long, but progress has been made. Both Dahir and Mashiah cite the example of the planned Palestinian city of Rawabi on the West Bank, spearheaded by the Palestinian-American entrepreneur Bashar al-Masri, as a beacon of hope. But Siraj’s confidence in the revitalisation of the Palestinian economy is perhaps best illustrated by its decision to launch a second fund.

“We have soft commitments and are confident we’re going to raise the first initial call,” says Dahir.

Most of Siraj’s investors are locals or Palestinians from the diaspora, though it does have some foreign investors. A further upgrade to the Palestinian market, which Dahir believes is likely, could bring more foreign investors to Palestine, especially if combined with an improved political situation.

The impetus for reduced political tension may again come from business people rather than politicians.

“There is already significant energy/natural gas integration between Israel, Jordan, and the Palestinian Authority, and hopefully soon with Egypt,” says Schoenfeld. “Major natural gas finds in the eastern Mediterranean will drive deeper integration. There is strong economic logic for both Greece and Cyprus, and potentially even Turkey, to join in this energy collaboration too. Assuming that the political dynamics improve somewhat, this co-operation in energy could extend to other fields, such as infrastructure, water technology, agricultural development and more.”