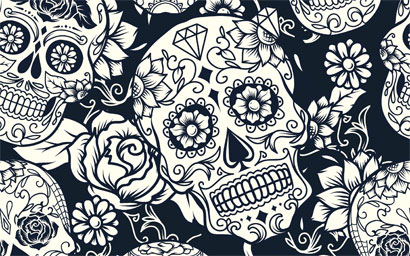 Against the recent emerging markets revival, the number of Brics fund closures has increased. Kit Klarenberg asks if this suggests developing regions are no longer worthy of investors’ attention.

In mid-November, Franklin Templeton said it would close the two sterling share classes of its $765 million (€722.6 million) ‘Bric’ fund, after assets halved in three years. The partial closure is notable; not only do Brazil, Russia, India and China (the Brics) form one of the biggest funds marketing stories of the past decade, but the fund is also managed by Mark Mobius, an emerging markets maestro.

However, in another sense, the partial cessation was hardly a surprise. Brics countries have all been battered to varying degrees by political and economic discord in recent years – collectively,
the cluster has fallen far from its 2007 apex.

The partial cessation of Mobius’s fund was in fact only the latest instalment of similar actions in the Brics sphere since 2010. Two months previously, BNP Paribas Investment Partners incorporated its Parvest Equity Bric fund into the Parvest Equity World Emerging fund.

About a year prior, Goldman Sachs merged its Bric fund into a broader emerging markets fund, just shy of the former’s ninth birthday. The fund’s assets had fallen from $842 million in 2010 to under $100 million. In all, Morningstar data indicates Brics funds have shrunk from a peak of 52 in 2008 to around half that total today.

The obvious question is whether the grouping is still relevant for investors as we enter 2017. Graham Stock, head of emerging market sovereign research at BlueBay Asset Management, says the quintet was always unalike, structurally and cyclically – and has never been more disparate than now. Today, each economy moves entirely separately in response to global headwinds and tailwinds.

Jon Wingent, head of portfolio specialists at Lloyds Private Bank, agrees Bric correlation has inversely widened to a significant degree in recent years. As an illustration of this, between January and November this year, the MSCI Bric Index returned 7.07% – but much of this was attributable to Brazil alone, which has returned 55.82%. The other constituents of the abbreviation have weighed down performance significantly, with China swinging between high negative and meagre positive numbers all year, and India falling by 5.25%. By definition, that level of dispersion challenges the concept of a four-country grouping, he says.

LOCOMOTIVE
Nonetheless, Brics still has its defenders, such as Erik Lueth, global emerging market economist at Legal & General Investment Management (LGIM), who notes that Brics are still the largest economies in the emerging market universe – and offer a quick glance at emerging market trends without digging too hard for data.

Lueth adds that in recent years, dividing emerging markets into commodity and manufacturing exporters has become common. This is because commodities – the locomotive of Brics growth for so long – have collapsed in price since 2010, a phenomenon that has affected emerging market economies in conflicting ways.

“Commodity exporters, such as Brazil and Indonesia, experienced significant supply-side shocks, resulting in overheating pressures and requiring fiscal and monetary tightening. By contrast, manufacturing exporters, such as Korea and Poland, remained much more aligned with the cycle in advanced economies, which was characterised by slack and required monetary and fiscal stimulus,” he says.

Some of these acronyms are tastier than others, but Rob Marshall-Lee, manager of the Newton Global Emerging Markets fund, finds any flavour-of-the-week investment cipher that lumps together highly diverse economies a bit hard to swallow.

“There’s great differentiation across emerging markets and we would caution against the use of any convenient sales-driven grouping,” he says.

Instead, he says investors should take a more granular perspective, at a stock rather than country or region-specific level. Thematic trends, such as demographics, debt levels, the mobile internet and commodity reliance can lead to dramatically different fortunes for companies within the same economy and even sector, he adds.

“Regional analysis loses this benefit, just as lumping emerging markets into a single asset class dilutes your return potential against a more informed and benchmark-agnostic approach.”

At Bluebay, Stock looks at factors such as debt or credit levels in economies.

“Sometimes you find a concentration of a particular type in a particular region, such as commodity exporters in South America, but it is always important to look beyond the simplistic regional classification,” he says.

A MAJOR QUANDARY
Sweeping assumptions in emerging markets can indeed be myopic. While Asia is renowned for its commodity guzzlers, Indonesia is a major exporter; while Mexico is increasingly a manufacturing powerhouse, elsewhere Latin America heavily relies on industrial imports.

Nevertheless, another major quandary for investors in the New Year is whether emerging markets in whole or in part are even investable for the foreseeable future. The election of Donald Trump in the US has already resulted in billions of dollars fleeing developing regions in general, and most major emerging markets in particular.

This panic and anxiety is arguably rational, to a degree. On the campaign trail, Trump effectively pledged to wreak havoc on emerging markets, promising 45% tariffs on China and withdrawal from trade deals. “This could lead to the erection of new barriers to cross-border trade, and in this context, we would worry particularly about producers of manufactured goods for export into developed markets,” says Stock.

Furthermore, markets currently view cuts to US income and corporate taxes as almost certain. If they do transpire, Federal Reserve rate hikes over the years ahead are extremely likely, and this could be catastrophic for emerging markets.

“This leads to portfolio rebalancing from emerging markets to the US and tightens financial conditions in emerging markets, which is negative for growth,” explains Lueth at LGIM.

“In extreme cases, higher interest rates in the US could lead to sovereign defaults and financial crises. However, we do not expect this outcome, given emerging markets have not heavily relied on foreign funding over the past ten to 15 years.”

PINCH OF SALT
Still, while the election result does raise questions about the viability of emerging markets, at least for the time being, Marshall-Lee recommends taking Trump’s oratory with a pinch of salt.

“He’s moderating his messaging already, and the World Trade Organisation gives some protection as to how far he can push tariffs and other elements. Much of the noise is likely to prove of little relevance, particularly for more domestically-oriented companies, such as consumer-facing firms in large economies such as India and China,” he says.

“In addition, we’ve seen some fairly sizeable price moves both before and after the election. This produces opportunities, as prices of stocks and currencies are oversold due to prevailing negative sentiment. Now may be a good time to accumulate assets, where growth prospects remain excellent.” 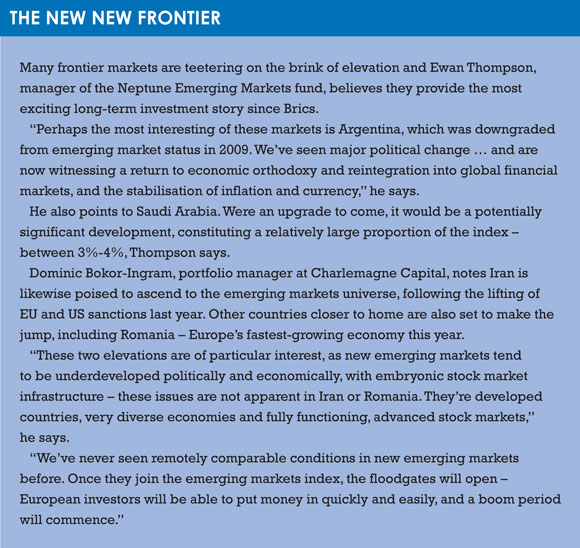 Moreover, while the future of emerging markets appears undeniably rocky at present, the Western world’s prospects seem even more insecure, with high volatility and low to non-existent growth set to continue. There are arguably more current and potential ‘Pigs’ in the developed market mix today than when emerging markets were at their peak of popularity – yet, despite this, developed market assets still come at a nigh-on record premium.

While Brics may not hold the currency it once did in any sense, there is perhaps one emerging market acronym that still holds weight – Eagles (emerging and growth-leading economies), a term coined by Spanish bank BBVA to describe the clutch of developing nations expected to generate 50% of global economic growth through 2020. Conversely, G7 countries (Canada, France, Germany, Italy, Japan, the UK and the US) are predicted to generate a mere 14%.

The days of easy double or even triple digit returns may be long gone, but emerging markets still represent some the best – if not the only – growth prospects currently available to investors. The emerging story isn’t over, or even nearing over – it’s only just beginning, and the economies involved still have a long way to soar. The clue’s in the title.