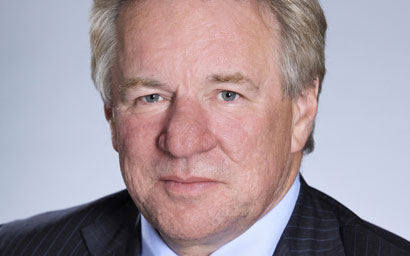 Lockdown has been good to Martin Gilbert, the founder of Aberdeen Asset Management who retired this year. He’s lost 15 kilos.

Gilbert partially retreated to his native Scotland, took advantage of the space, and was content with the Scottish regional approach to combating Covid-19, which permitted golf – his favourite exercise – to be played.

Yet golf wasn’t behind the 15-kilogram drawdown. The key to the veteran chief executive’s weight control was measuring his food and using an electronic fitness tracker. “I weighed everything I ate and used Fitbit. It’s brilliant. I worked to about a 1,500-calorie deficit a day,” Gilbert says. “I’m a figures guy. It worked for me. I like the quant approach to it.”

The figures guy started his working life as an accountant and then co-founded Aberdeen AM in 1983. By his own admission, he failed as a fund manager before taking up the job of running the business and helped drive it to become, via the 2017 deal with Standard Life, the UK’s largest listed asset manager at the time.

He’s now made a clean break with Standard Life Aberdeen plc, at least as an executive. Apart from acting as a non-executive director on some of the company’s fund boards, he’s cleared his desk, he says, having stepped down as co-CEO in March 2019 and retired fully in September after serving as vice-chair of the board.

It wasn’t difficult to leave. “The difficult time is when you say you are going to leave, because then it’s irreversible.”

First to know
The first person he told was Sir Gerry Grimstone, the company’s chairman, who is now Lord Grimstone of Boscobel and a Minister of State for trade.

Grimstone was “under pressure to deal with the co-CEO situation”, says Gilbert, referring to the co-leadership model that he and Keith Skeoch, Standard Life’s chief executive, adopted after the merger – a model that critics had jumped on. “So, I made it easy for him.”

Gilbert had, in any case, wanted to move to the next stage of his career, so he became vice chair. Six months later, the decision was made to leave for good in another year.

In his nearly four decades at Aberdeen and Standard Life Aberdeen, Gilbert says he only considered leaving on one other occasion – after the firm was hit with compensation claims and legal action following the ‘split-cap’ affair in 2002. At that time, he had to appear before a Treasury Select Committee.

“I did offer to resign when I managed to get the company into difficulty with split caps, but the board, I think, said to me: ‘Listen, you got us into this mess; you better get us out.’”

The split-cap scandal drew in a number of asset managers and centred on investment trusts investing in each other.

“I worked hard to get us out of it. It’s hard to say that’s your finest moment because solving a problem shouldn’t be your finest moment, but of all the things I did, probably the hardest and most difficult thing I’ve done was dragging us out of the split-cap fiasco.

“It took two-and-a-half years, but we were a much better company as a result of that afterwards. I have to say the board was fantastic. And Sir Malcom Rifkind was outstanding. I thought to myself at the time if there was going to be one director who, being a politician, would distance himself from the issue, it would be him. But in fact, he did the opposite. It was really remarkable what he did. Intellectually, he was brilliant.”

Something small, something private
Rather than retiring, Gilbert says he’s embarking on the second stage of his career. He does not want to be a CEO again. Thirty-seven years was more than enough. But he would still like to be involved with asset management as a non-executive.

“Let’s see what comes up. There’s a lot of opportunity and offers. At some stage, I’ll have to decide.”

Saying he’s now busier than ever, one offer Gilbert did not refuse was to become board chairman at Revolut, a UK ‘challenger’ financial services provider with roots in fintech. Fintech was part of the attraction.

“I’ve always been interested in technology. I thought I’d try and learn something about tech and I thought I could also contribute.”

Revolut is private and, says Gilbert, probably the fastest-growing and largest fintech in the UK, with 12 million customers globally and “growing every day”.

In January 2021, it was also announced Gilbert had joined UK asset manager River & Mercantile Group as its deputy chairman.

He says that, post-Aberdeen, he’d prefer to be involved with “something small [and] more private than public, as that’s where all the growth is”.

Asked for his thoughts on listing, Gilbert says there are big problems in the large, publicly quoted sector, partly because it’s getting more difficult for senior management to be paid what they feel they are worth. And there’s all the governance and regulation, which has perhaps swung too far, he suggests.

He wouldn’t advise Revolut to float, he says. At least not yet; not until the firm is profitable, which “will be very soon”.

He adds: “The focus on fintech has now changed completely from being growth-orientated at any cost, to really we need to have a route to profitability. And regulators are demanding that of shareholders.”

Gilbert said Aberdeen went public because it needed money for acquisitions. Apart from that, he said he wasn’t sure there were any huge benefits for asset managers being public, especially smaller firms.

Perhaps the main area where Aberdeen made its mark was emerging markets. “That was really where our spectacular growth came from,” he says, recalling that Aberdeen established itself in Singapore in 1992. Its only rival there was Jardine Fleming.

“[Emerging markets] is still the best place in the world to invest because of the work ethic and the overseas Chinese,” he says. However, he considers it difficult to make money in China, given China’s desire “quite rightly” to own its own companies.

Gilbert and his team may have been early to emerging markets, but it’s a different story with private capital: “With the benefit of hindsight, we should all have been doing this five or ten years ago, concentrating on building this expertise.”

He cites private markets as one of three pressure points for traditional asset managers, next to fee compression and passive. He says many asset managers in that position are trying to re-engineer their businesses towards private markets, where there is growth and where fees are more stable. “They are up against some big brands there and it’s going to be difficult, but not impossible.”

A big issue to solve before investors are encouraged to “pile into” private markets is daily liquidity. “The sooner we get away from daily liquidity in illiquid assets the better, and then people will understand that if it’s monthly liquidity, or three-monthly … that actually they are taking up a long-term bet on this asset rather than a short-term one.”

The marketing man
Marketing was his main contribution to the firm. “Marketing is second nature. I’ve always been a salesman; I’m a failed fund manager, you’ve got to remember that! I managed to take my fund to the bottom of the league table. I quickly got fired by my colleagues from managing money. They told me to go and run the business and tell people about what we do.”

He adds: “I never really sold. I’d go and see a head of a sovereign wealth fund and we’d talk for an hour about markets.

“What I think people sometimes fail to understand is that the fund selector is not going to put an idea up to buy a fund unless he knows the boss is going to be fine about it.

“That’s why it’s always important to market at the top of an organisation – not sell. But then to sell at a level below, so that if the fund selector does put an idea up, he knows he’s not going to be rejected.”

Marketing is as important as managing the money, he says, adding: “Wherever I am in the world, often Larry Fink [CEO of BlackRock] has been there or is just coming there, so you’ve got to admire [that]. Even someone like him, running the biggest asset manager in the world, he still does all that work, the marketing, with the heads of sovereign wealth funds.

“It’s often humiliating, actually. I remember once I was in China and as I’m queuing up, he’s ushered in like royalty. You realise your position in the world!”

And so, what about that dual CEO role? “I think the criticism was wrong.” In his view, he and Skeoch’s differences helped to boost their combined efforts. “People are entitled to their opinions, but they didn’t really know what they were talking about,” he adds.

“You’re not as good as people say you are, and you are not as bad.”

“I knew we needed a generational shift at Aberdeen,” Gilbert says. During the Standard Life/Aberdeen merger, he adds, good terms were negotiated with people to leave, meaning many of his colleagues are enjoying retirement too.

ESG is also a generational shift. The key focus is sustainability, but impact investing will be “massive” and Gilbert believes it can be profitable. Concurrent with this, he believes the word ‘pension’ needs to be retired and somehow replaced with the notion of “saving for the future”, with its implicit double meaning.

As for his own future, he’s still putting money aside. Most of his own investments, he says, are in Aberdeen funds and Asia.