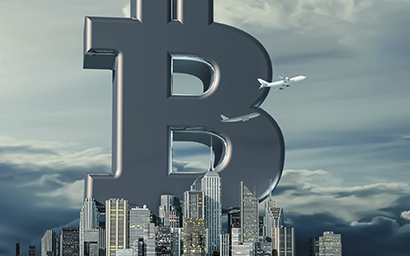 Following a meteoric 18-fold rise in value this year, Mark Latham asks whether the volatile cryptocurrency – until recently the preserve of geeks and criminals – could become a serious vehicle for institutional investors.

The price of a single Bitcoin surpassed $16,000 (€13,570) for the first time in early December, when the combined market capitalisation of all digital currencies reached an all-time high of $400 billion of which bitcoin accounted for $277 billion. As Funds Europe went to press, it was spiralling higher by the hour.

But despite all the hype, there has so far been a reluctance among institutional investors – who fear it is too illiquid, too volatile and too lightly regulated – to view bitcoin as a legitimate asset class.

In recent weeks, however, a spate of developments have indicated that the funds sector may be about to embrace the electronic currency, created in 2009 by a mysterious coder who went by the name of Satoshi Nakamoto.

Three US derivatives exchanges (the Chicago Mercantile Exchange, Cboe and the Nasdaq stock exchange) are this month set to introduce futures contracts in bitcoin, which – by allowing traders to buy assets at a predetermined price at a set date – would enable price movement speculation and hedging. This could reduce the digital currency’s wild swings of volatility.

David Coker, a lecturer at Westminster Business School and former vice-president of global risk management at Deutsche Bank, is one of those who believe that the current instability in bitcoin prices is likely to subside once institutional investors enter the market.

“Once financial products allowing investors to protect themselves against drops in price are in place, we’ll likely see a wave of money from institutional investors enter the market, all chasing a limited supply of bitcoin,” he says.

Another milestone was reached in December when Calastone, which operates a transaction network for mutual funds, announced that in 2019, it would begin using blockchain on its platform for processing trades in the mutual fund sector.

The company claims that by reducing the number of staff needed to process trades and verify customers’ identities, this could slash costs for UK fund managers and investors by about £885 million a year.

The London-headquartered company said that, under test conditions, it had successfully used blockchain to buy and sell mutual funds over the past year. Its network is used by distributors, fund managers and transfer agents, meaning the migration to blockchain will be transformational for the industry.

Edging towards the mainstream
In recent months, there have been a slew of further developments that show bitcoin is becoming more widespread in its use in the financial industry, as well as by consumers generally.

A local authority in the Swiss canton of Ticino recently announced that it will start to accept tax payments in bitcoin from next year. Meanwhile, a growing number of retail outlets in Estonia, Switzerland, Hong Kong and the UK are already accepting payments in bitcoin as are multinationals such as Expedia and Microsoft.

UK financial services firm Hargreaves Lansdown has, since June, made bitcoin available to retail investors in the form of an exchange-traded note (ETN). The tracker fund, created by the Swedish firm XBT Provider, is available through Hargreaves Landsdown’s online investment platform and has become one of the firm’s bestselling products.

Bitcoin has outperformed all other assets in 2017 after starting the year at less than $1,000. Having started the decade with a valuation of a few cents, it is now worth more than ten times the price of an ounce of gold, the precious metal normally viewed as one of the safest havens in times of economic uncertainty.

An investment of $100 in bitcoin at its lowest point in 2010, a year after its launch, would now be worth $23 million dollars. However, despite rising optimism for the so-called blockchain distributed ledger technology behind bitcoin (which is increasingly making transactions smoother), a growing chorus of sceptics is warning of the dangers of a huge speculative bubble building.

Jamie Dimon, the chief executive of JP Morgan Chase, famously called bitcoin a “fraud” that would eventually “blow up”, while BlackRock chief executive Larry Fink called it an “index of money-laundering”.

Others critics have said it could be the greatest bubble in human history, potentially dwarfing the 17th century’s Dutch tulip mania, the South Sea bubble of the 18th century and the dotcom bubble of the 1990s.

When it comes to alternative investments, opinion is just as divided.

A recent survey found that many alternative investment managers are “unconvinced” by cryptocurrencies and two-thirds of hedge fund managers have no intention of investing in them.

But according to financial research firm Autonomous Next, more than 90 crypto hedge funds have so far been launched this year, bringing the worldwide total to more than 120, with $2.3 billion of assets under management.

One of the most noteworthy product developments occurred in November when Paris-based asset manager Tobam launched what it claims is Europe’s first bitcoin mutual fund as an unregulated alternative investment fund domiciled in France.

The €8 billion asset manager claims that the fund will for the first time give institutional investors exposure to the cryptocurrency in a convenient and safe vehicle.

While bitcoin funds exist in the Cayman Islands and other low-regulation jurisdictions, Yves Choueifaty, founder and chief executive of Tobam, believes that Tobam’s bitcoin fund is the first such fund to be launched in a highly regulated country.

Extensive market testing prior to the launch, he says, uncovered high levels of “enthusiasm” from public entities such as central banks, sovereign wealth funds and public and corporate pension funds.

Choueifaty is the first to admit that bitcoin is “an extremely risky asset” but says that investors are – and should by definition be – risk-takers. 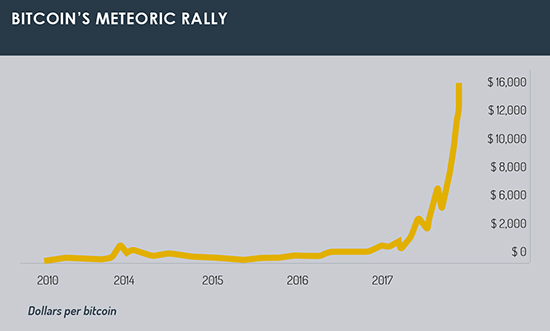 He adds that bitcoin – which he describes as “a beautiful mathematical object” – will be particularly useful for any investor wanting to diversify their portfolio.

Even so, he cautions investors against piling all their cash into it. “Given the empirical characteristics of bitcoin, investors should probably decide to invest in the region of 1% of their savings into bitcoin rather than 5% or 50%,” he says.

“If you really want to build a diversified portfolio, it makes sense to have a look at bitcoin.”

ETF Securities, a Jersey-based firm that specialises in exchange-traded funds based around commodities, is also considering using bitcoin, although any decision on a possible fund launch is some way off.

James Butterfill, the firm’s head of research and investment strategy, says that the jury is still out on whether bitcoin could be used as a vehicle for institutional investors.

“Bitcoin has great potential and, like many small-cap businesses that turn into large-cap firms, it could become incredibly popular, but at the moment we just don’t know,” he says.

Butterfill adds that bitcoin liquidity, currently restricted to around $300 million a day (up from $100 million six months ago), could become an impediment to its widespread use by institutional investors, as it is hard to own a large amount if you are a large fund.

“While liquidity is growing rapidly for very large funds, it may still be an issue,” he says. “If you had a large fund manager that wanted to buy $100 million, they could do it in a day but it would be a pretty sizeable chunk of the total amount and you would have to do it over several exchanges.”

Despite the technical shortcomings, Butterfill says that demand from investors is steadily growing.

“The issue of cryptocurrencies and bitcoin comes up at every meeting we have with clients,” he says. “We are seeing a lot of institutional investors querying or at least questioning the idea of bitcoin.”

A further argument in favour of bitcoin, he adds, is that it has “compelling diversification benefits at a time when investors are uneasy about their holdings of bonds and equities, which both seem to be at extreme levels in terms of valuation”.

The interest in bitcoin has largely been fuelled, he believes, by today’s low interest rates and the search by investors for assets that rise in value.

He likens bitcoin to gold, a metal which “does have some physical uses in industry and in jewellery but is valued far above its intrinsic worth as a means of exchange”.

“I can’t look at bitcoin and think that there is a reason why an institutional investor has to have that,” Greetham says. “I don’t see institutions investing in it, as there isn’t really a fundamental business case for it.”

Greetham draws warning parallels with the turn-of-the-century dotcom bubble. “If you bought dotcoms in the late nineties, many of them were not around five years later, let alone ten years later, and even those that did survive incurred painful losses for several years,” he says.

The reason that the dotcom bubble eventually burst was rising interest rates, Greetham says. “So maybe bitcoin will bubble around for a while, but when interest rates start to go up, there could be an almighty crash.”