'Smart beta' has been criticised as a marketing term for old ideas, but the concept is gaining traction. Nick Fitzpatrick considers the implications.

New “smart beta” strategies arrive like salt and pepper, adding a bit of gentle flavour, and a lot more cheaply than saffron.

Smart beta refers to a set of indices that arrange stocks differently to traditional indices – most simply by equal-weighting them, or by volatility levels or momentum – rather than by their capital value.

Investors hope to gain a higher performance for doing so. The use of the term smart beta and whether it really is a new concept is causing emotions to flare, but it is catching on among institutional pension fund advisers.

Neil Morgan, senior pension trustee at Capita Asset Services, says: “I think all consultants are on board with smart beta.”

“This is a typical best practice recommendation,” says Morgan.

BOILING OVER
Smart beta has been widely talked about in the exchange-traded fund (ETF) world, but it is also challenging – or providing an opportunity for – providers of traditional pooled and segregated index funds to add alternative beta to their offering.

In the fourth quarter of 2013, one of the largest asset managers in the world, Vanguard, launched a minimum volatility fund in the US. Under the company’s founder – John Bogle – Vanguard was the pioneer of index investment, but this new launch smacked of “getting on the bandwagon”. 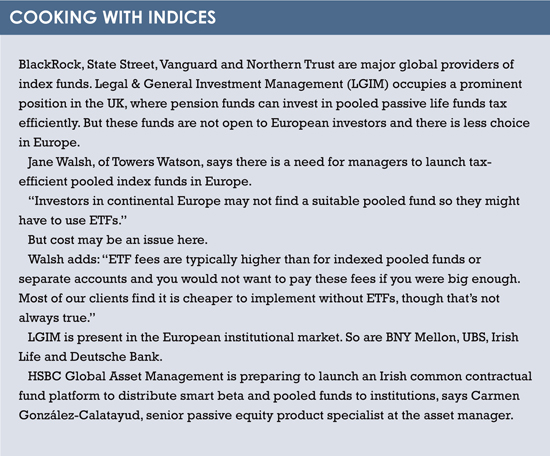 Though the Vanguard Global Minimum Volatility Fund is active, “min-vol” has been a highly popular theme within the quasi-passive, quasi-active alternative beta universe. The fashionableness of min-vol and other popular alternative indices threatens to create risks.

For investors, says Walsh, investing in smart beta indices – and other alternative indices like infrastructure, which is increasingly of interest to institutional investors – must not only consider the economic case for the investment, but look at the price of index constituents, historic valuations, and additional factors like leverage. Banks, she notes, had very low price volatility before the financial crisis.

It may be too soon to worry about alternative beta strategies boiling over, the popularity of the product set being relatively new.

Simon Midgen, head of index funds strategy at Legal & General Investment Management (LGIM), says: “Growth of these strategies has been substantial but in comparison to market-cap these are still very, very modest in size. There is not a sense yet that these are anywhere near approaching capacity constraints, but it is a consideration.”

LGIM, a major provider of traditional index funds to the UK market, has £10 billion (€12.1 billion) under management in alternative beta and £266 billion in total index management out of £450 billion of total assets under management.

MIGHTY VANGUARD
So what about the mighty Vanguard? Does this asset manager, which was formed in 1974 and which introduced the world’s first index fund in 1976, and now seeks to challenge the funds market in UK and Europe with its low costs, subscribed to smart beta?

“We have products in the US that use style indices and some would recognise them as smart beta,” says Jeff Molitor, chief investment officer of Vanguard in Europe, which also manages active funds.

But, essentially, the answer is no.

Molitor wants to caution about smart beta. He’s an industry sceptic. “There’s a huge back-test bias [of indices] when you look at them. A new index looks great before an ETF issues on it, but goes to zero when it comes out … Some would not see the light of day if they were back tested … The rules in smart beta are not necessarily robust.”

Molitor is among a band of critics, some who see smart beta as a new marketing term for older ideas, and some who warn of significant difference between this new passive approach with the old one, such as higher levels of turnover in some portfolios.

It is not to say that alternative betas do not have a role to play, they say but generally warn investors to not see smart beta as a wholesale alternative to cap-weighted passive investment or active investment.

Molitor also emphasises the active nature of this seemingly passive approach. “By moving away from a traditional index you are going more active because by definition you are overweighting and underweighting relative to the broad market,” he says.

“Unless you think [smart beta] is going to be an enduring source of yield, you will have to switch out of it and investors do not switch very well. There are entry an exit risks.”

Pension fund advisers should be aware of these risks, of course.