Afore Banamex pension fund issued the first international mandate earlier this year. Andrew Short looks at the how the Mexican pension market, which is forecast to be worth $500 billion within ten years, is opening up.

Could Mexico rise out of the shadows of Brazil and Chile and become a more important destination for fund managers’ efforts in Latin America?

Economic growth and agreeable demographics have drawn some of the world’s largest investment firms to the continent in recent years, with Brazil’s growing middle class and Chile’s liberal investment landscape as key drivers. Mexico has always been viewed as a harder nut to crack.

“The market has had a slow growth in opening up to foreign managers,” says Ashmore global head of distribution Christoph Hofmann. “Just like in the US and European markets, investors in emerging markets are often very home-biased and think that investing in their own national markets is the safest investment.” He adds that, in addition to the behavioural aspect, regulators often impose limits on foreign investments in pension plans in order to support the development of domestic capital markets. In Mexico this is no different and the bias has been towards local fixed income and equity products for some years.

Optimism has been growing over the future development of the afores – state pension funds in which Mexicans must invest 6.5% of their salaries (see table one for a breakdown of afores in Mexico). However, afores have been affected by poor returns in local fixed income instruments over the past couple of years, as interest rates have fallen and the Mexican peso declined in value. But this is changing, albeit slowly. Figure two shows the asset allocation of afores over the past few years and how it has shifted.

The Afores have traditionally been hampered by cumbersome regulation that keeps their allocation to local fixed income assets high and limits international investment says Carlos Vazquez, Mexico-based consultant at Mercer. “The outsourcing of the investment portfolio management to external experts and independent investment managers was only allowed under the law in 2011-2012. In this sense, there has been clear legislation on how these external managers can participate in this system only in the last few years,” says Vazquez.

Afore Banamex, a pension fund and wholly owned subsidiary of Citigroup in Mexico, launched Mexico’s first international investment mandate – initially a $200 million global segregated account – with Schroders, a London-listed manager. This is the first mandate to be awarded to an international asset manager in the history of the mandatory pension fund system in Mexico. Afore Banamex awarded Schroders this mandate with the aim of diversifying its investment strategy and taking a specialised approach to investing in international markets.

Afore Banamex chief investment officer Javier Orvañanos, says: “As the Afores’ assets under management grow, so does the need to find investment opportunities beyond the local market that offer better risk adjusted returns to their clients.” However, he adds that though awarding mandates has not taken that long, implementing them has because of local regulation. He also says there may be another fresh wave of mandates being awarded in the coming months, but the pace of implementation needs to be picked up if the investment market in Mexico is going to flourish.

Pioneer Investments’ Mexico director general Gustavo Lozano also says the first mandate awarded took too long in the implementation phase. “The new capability of hiring managers to invest in international markets through segregated accounts was a learning experience on all fronts,” he says. “Managers, clients and regulators had to set procedures that were not in place when regulation was first introduced.

“The Mexican financial system is highly regulated and pension system [Afores] is under even more scrutiny, therefore the amount of controls and reports is high and implementation as such was not easy.”

He adds that it took two years to implement the first mandate after it was awarded, but he thinks that the next projects will take significantly less time. “It is in everyone’s interest to have future projects funded in a two to three month period,” he says. This first leading deal will hopefully be an educational experience for those in the Mexican pension market hoping to repeat the activity and can be used as a model for future deals to speed up the process.

Orvañanos concurs with this view and hopes that it will shorten the learning curve for the industry. He says the Afore Banamex fund is open to segregating more mandates in the next few months and that other funds will follow suit.

“Perhaps in no more than six months the scheme will probably have funds of over $1 billion through different managers. Other Afores seem to be going in that direction and it should take less time to implement,” he says.

OFFERING DIVERSIFICATION
The Mexican pension fund market is in need of expertise, but what can foreign managers bring to the table? BlackRock head of Mexico, Central America, and Caribbean Samantha Ricciardi has seen increased competition for mandates in the afores sector. “However, the most interesting trend we are seeing from afores is their interest in increasing the diversification in their portfolios.”

This is important if the Mexican pension system is going to develop and the only way for this to happen is to hire international managers who have expertise in other regions and can bring expertise from home countries.
Afore Sura is currently working with State Street as its international custodian and with other asset managers to implement mandates. Sura Mexico chief investment officer Enrique Solorzano says: “This process includes making changes to internal manuals and processes, negotiating the contracts with the different parties and making sure that we are in compliance with the different regulations involved.” 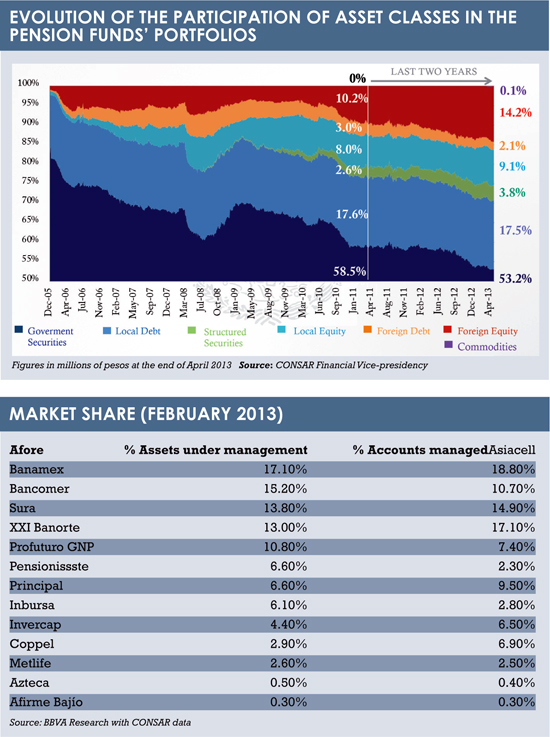 The use of external managers will also increase the quality of investments, according to Lozano at Pioneer, and also increase investment ideas. “Investing in external markets is not easy.Afores are looking to make smart investments in less-known places through the expertise of international managers like us. They do not necessarily have the human capacity to tackle all geographies and this way they manage to import knowledge and technology, revamping their capacities.”

There is one other final effect of outsourcing, according to Vazquez, the Mercer consultant. “The Mexican Retirement Authority thinks that the outsourcing of investment mandates will help in decreasing the operative costs. The expertise of third parties will likely reduce expenses, and this situation will translate into lower fees charged to the participants’ accounts and with likely higher return to these accounts.”

FUTURE DEVELOPMENT
Today, the afores hold around $155 billion of assets under management, which is 15% of GDP, with a ten-year annual growth of 17%.

As with other Latin American countries, the demographics are favourable with many young people entering the workforce, the pension system is also in its early capitalisation stage. Pioneer Investments forecasts the system could be worth $500 billion in ten years.

Schroders head of distribution for Mexico and Central America, Alberto Deleze, says because the market is still in its early stages, he forecasts a number of developments in the coming years. “We can see regulation becoming more flexible and allowing a broader set of assets; higher exposure to international markets, which is currently set at 20%; and an easier set of rules for external players.

“We also forecast an increase in deposits to afores as reasons why this market will continue to grow and be an interesting destination for specialised asset management firms.”

Principal Financial Group Mexico chief investment officer Jaime Álvarez agrees with this view and feels things may move gradually, but diversification is going to be a key development.

“The Mexican pension fund industry has gradually opened up to new asset classes and increased the exposure limits to those assets with higher risk and higher long-term return,” he says.

“This has been evolving as long as the regulation has allowed it and the afores have been ready to manage those new assets and adequately manage their risks. We think that the trend will continue in the same path, albeit slowly. But there is still plenty of room to improve diversification for the portfolios with international managers helping the process,” he says.

For international managers, Mexico could become the destination of choice for their efforts in the region as the pension fund industry expands to its full global investment potential. Perhaps Mexico will eventually rise out of the shadows of Brazil and Chile.