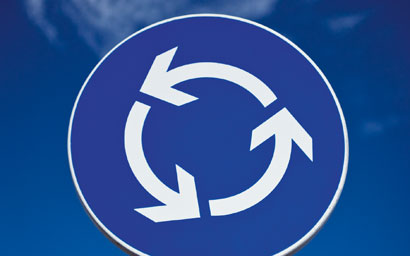 The increasing variety of bond ETFs and competition among providers has given investors ample room to choose high-quality products, says Felix Goltz of the Edhec-Risk Institute. Meanwhile, more investors are replacing active managers with ETFs.

Satisfaction with standard exchange-traded funds (ETFs) has generally remained at high levels, especially for traditional asset classes, according to the eighth Edhec-Risk Institute survey on the usage and perceptions of ETFs.

Without doubt, the increasing variety of products and the increasing competition among providers concerning bond ETFs, and especially corporate bond ETFs, have given investors ample room to choose high-quality products.

The rate of satisfaction for infrastructure ETFs is more variable, with high figures in 2010, 2012 and 2014 (95%, 83% and 86% respectively) and lower figures in 2011 and 2013 (67% for both). It should be noted that the sample of respondents to say whether they were satisfied or not with infrastructure ETFs was very small, with only seven respondents this year and six in 2013. As a result, the impact of a single respondent changing his mind since last year has a considerable impact on the result.

Hedge fund and real estate ETFs have exhibited variations in satisfaction rates between 30% and 60%, and 50% and 95% respectively over the past eight years. However, for real estate, higher rates of satisfaction are observed since 2010, as no rate of satisfaction lower than 83% has been observed since then. Regarding hedge funds, the sample of respondents to say whether they were satisfied or not with ETFs was also quite small, with only 12 respondents in both 2013 and 2014. 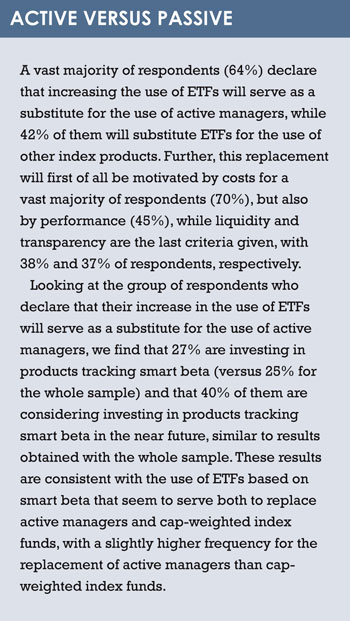 In particular, while long-only (and thus easy-to-implement) exposure to standard asset classes such as stocks and bonds provides access to a number of well-documented risk premia (such as the equity risk premium for stocks, and the credit and term premium for bonds), many alternative asset classes do not necessarily give access to risk premia through long-only investing. For example, it has been argued that long/short positions in commodity futures are necessary to capture risk premia in commodity markets, while long-only exposure to commodity prices is not expected to give rise to any risk premium.

Moreover, this interest in increasing ETF usage can be contrasted with the lower percentage of investors who plan to increase their usage of other instruments, such as futures and index funds (about 20% for both), or total return swaps (TRS, about 10%). It thus appears that ETFs not only benefit from increasing interest in index investments, but also that ETF users plan to favour ETFs over other indexing instruments such as futures.

THE HIGH-QUALITY TRACKING OF ETFS
Nearly 100% of respondents say ETF tracking quality is very good or fairly good, a similar percentage to 2013. It should be noted that respondents were only asked about tracking error.

The tracking quality of ETFs may be characterised by several indicators, including not only the tracking error but also the tracking difference.

Similar results were obtained for the MSCI Emerging Markets Index and the MSCI Europe Euro Index. Bonelli concludes that tracking error is not representative of the under or outperformance of ETFs with respect to their benchmark, but serves first of all to evaluate the relative risk of daily deviations and is of more concern for short-term than mid-term or long-term investors.