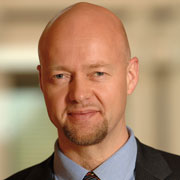 The Norwegian sovereign wealth fund is the second largest in the world and the industry is always on the lookout for its next move. Angele Spiteri Paris speaks to Yngve Slyngstad, of NBIM, about his plans for the fund

The Government Pension Fund – Global, the Norwegian sovereign wealth fund, is one of the most influential institutional investors in the region and possibly in the world. The fund has made an allocation to real estate and is considering private equity investment – thus giving its proverbial stamp of approval to alternative investments.

Responsibility for the operational management of the pension fund’s assets is delegated to Norges Bank Investment Management (NBIM) by the ministry of finance. The firm manages 88% of the fund’s NOK2.6 trillion (€323.7bn) internally.

CEO of NBIM, Yngve Slyngstad, says: “We’re investing 5% of the fund into real estate and that mandate is going to start this week. We’re going to invest in real estate over the next few years, starting in Europe and moving to look at the US at a later stage.”

Slyngstad says the majority of the mandate will be managed internally but says: “For practical purposes we’re looking for joint venture partners to invest those assets.”

On behalf of the pension fund, the firm is also exploring the possibility of an allocation to private equity, subject to approval by the ministry of finance. Slyngstad says: “If we were to invest in private equity, this allocation would be externally managed.”

This move by NBIM echoes the sentiment of Nordic investors across the board (see alternative investments article, p22), who have been showing signs of an increased appetite for alternatives.

“We have numerous new mandates in diverse places in the world. Some of the new markets we have moved into include Brazil, China, Turkey, Poland, Indonesia, Malaysia and Thailand.”

These mandates were awarded to external managers and it looks like other fund managers may be in with a chance of getting a piece of the pie, as Slyngstad says: “This [awarding specific country mandates] is a strategy we’re going to continue going forward with.”

Currently, 12% of the fund is managed by external managers and, as Slyngstad points out, it’s no small fry. “Twelve per cent of the fund is more than $50bn (€36.6bn) so it’s a significant amount already,” he says, but adds: “It’s on the path to increase in the years going forward… we have a programme to continue to fund more managers and also the existing managers with more assets.”

NBIM manages most of the assets belonging to the pension fund. The Dutch pension fund giants PGGM and ABP, who also managed a large proportion of the funds’ assets, split out their asset management capabilities in an effort to sell their expertise on to other investors.

Wondering whether NBIM would follow the Dutch example and consider branching out to offer asset management services to third parties is no drastic stretch of the imagination. But Slyngstad refutes the possibility of this ever happening. He says: “We only manage our own funds. Offering asset management services to any client beyond the Norwegian pension fund is out of the question.”

However, this does not mean that the firm is not aiming for growth. He says: “We are continuing to build the organisation into a more global fund management organisation. We’re recruiting people in London, New York and Shanghai to this end.”

In 2009, NBIM recruited 51 new employees from eight different countries. In the most recent annual report regarding the management of the pension fund, the firm says: “In response to a broader fund management mandate, NBIM restructured its organisation in 2009, focusing on increased specialisation, delegation and global expertise.”

Slyngstad says: “We recruited and put in place a new leader group effective from October 2009 and half of that leader group was recruited externally and from the international markets.”

So, much like most of the asset management industry at large, NBIM used 2009 to concentrate on itself and its core purpose, that is to effectively manage the second largest pension fund in the world. Questioned whether the firm plans to increase outsourcing in an effort to further focus on its core strengths, it seems this has already been done.

Slyngstad says: “We’ve already outsourced a huge part of our business. We have an external back office provider and most of our IT, both development and infrastructure and also on the real estate side, quite a bit of the administration function around that is outsourced. These arrangements are not going to change materially in 2010.”

In a letter to the ministry, written together with NBIM executive board chairman Svein Gjedrem, Slyngstad defends the use of active management. He says: “A passive, uninformed approach to operational decisions is an alternative without a sound theoretical or practical justification. Direct costs would be somewhat lower with this approach than with the current model. However, we would not be able to match the return on the benchmark portfolio. As a result, Norges Bank cannot recommend a passive strategy for the management of the fund.”

It looks like he is having the last laugh, at least for now. The latest annual report shows that the pension fund generated a record return of 25.6% in 2009. Not only was this a complete turnaround from the bleak performance of the previous year, but the fund also beat the benchmark by 4.1%.