The credit crisis has focused minds on risk management again. Over the past year value at risk (VaR), a standard risk management tool, has been criticised for its shortcomings. It was unable to predict certain seismic events, such as the August 2007 crash, or Lehman Brothers.

But is it too much to really expect any risk management product to adequately predict when trouble – particularly rare, so-called ‘black swan’ events – will happen next, and who to? Risk management firm StatPro is confident enough in its model to make a call.

Having  anticipated the troubles at Bear Stearns, Lehman Brothers and Washington Mutual, the firm claims, its risk indicators now suggest US lending giant GMAC is walking a similar path to these institutions prior to their troubles.

Just after the fall of Bear Stearns in March 2008, the Statpro risk model signalled trouble at Lehman Brothers because the bank’s VaR levels were spiking. Lehman went on to file for chapter 11 bankruptcy in mid-September.

The model then integrates the credit risk component with other market risk factors – FX, interest rates etc – to compute a single VaR figure that embeds all risk factors in one number, the firm says.

An increase in VaR means there is a corresponding increase in the relevant CDS spreads. This can be seen in the chart, as Bear Stearns registered very high VaR levels and Lehman Brothers closely followed. 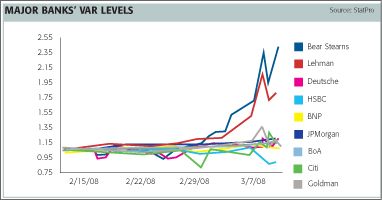 StatPro said the model also showed that Washington Mutual was headed down that route, before being bought by JPMorgan in late September.

Once VaR reaches certain levels, it is hard to go any further, said Dario Cintioli, CEO Italy and head of risk at StatPro. He explained that CDS levels rose rapidly during Washington Mutual’s final days while the VaR remained at a constant high.

Danger signals
The latest analysis by StatPro shows that US lending giant GMAC may be headed down the same road. Analysis shows that its VaR is reaching a constant high, coupled with soaring CDS spreads.

StatPro notes that GMAC, the finance arm of General Motors, is different to banks since it’s an industrial company and does not risk a run on its branches. It cannot be forced into a liquidity crisis. “That said, the last spike of the CDS spreads is extremely worrisome.”

In the seven days before its collapse, Bear Stearns registered an increase in VaR from 2% to 4.12%. GMAC’s VaR was recently at over 6%.

But Cintioli notes that although the signs do not bode well, there is still a chance GMAC will recover.

“We don’t have a crystal ball,” said Cintioli. “We are simply building the credit risk component by looking at the market that, in our opinion, contains the best information: the CDS over-the-counter market.”

StatPro says its model can provide a good comparison for ratings assigned by rating agencies. This is because it is dynamic and reflects changes in the market, while credit ratings are static and less agile.