Should Europeans choose an American firm for their US equity exposure? It depends if that manager has staying power and can ensure good communications with head office. George Mitton reports.

The US stock market, that tireless engine of economic growth, has powered ahead in recent months. The S&P 500 index rose 11% in the first three months of the year, while at the end of March, the Dow Jones Industrial Average exceeded its pre-2008 peak – truly a recession-busting performance.

Of course, some fear US stocks are overvalued and due for a correction. Others believe political negotiations over the US debt will capsize the American economy.

For now, though, investors across Europe can look at the performance of their US equity funds and smile. But which of the many providers of US equity products have shared in their joy?

At first glance, figures from data provider Lipper confirm what many would suspect: US-based asset managers have gained a large share of recent inflows into US equities.

US firms were the top three in terms of net sales of US equity products in Europe in the six months to the end of February. Vanguard was first with €792 million in net flows, almost all to its passive funds, followed by JP Morgan and AllianceBernstein, the US subsidiary of French insurance group Axa.

But going down the table, it becomes clear that Americans are not dominant in this asset class. Of the top 20 managers by net inflows in the period, only eight were US firms. Europe-based firms such as Natixis, HSBC, Credit Suisse and Robeco attracted large inflows.

Clearly, it is not a given that Europeans will chose an American company to manage their exposure to US stocks. What influences their decision, and what might the Americans do to better market their products in Europe?

Many American players report that a key concern of institutional investors is to know that their US providers have staying power. It is not good to agree a mandate with a US company that is in the midst of an ambitious expansion in Europe, only for that firm to backtrack and withdraw offices and staff at a later date.

“The first question investors ask is, are you going to be here for the long run? Because there’s been form of people coming and going,” says Tom Douie, who leads Neuberger Berman’s financial intermediary business in Europe.

Douie suggests some US companies have failed in Europe because they came to the market with unrealistic expectations. Neuberger Berman, in contrast, has concentrated on the institutional market and
never attempted to capture retail flows with big advertising campaigns.

“It’s all about picking the right strategy for the long run,” he says. “A part of that is not overreaching.” 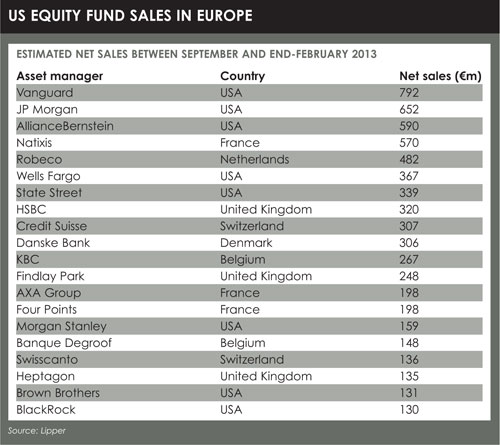 Another cause of mistakes is failing to appreciate how continental Europe differs from the US. In the US, like the UK, the way to reach pension funds is through investment consultants, which are used by the majority of funds. But in continental Europe, pension fund assets have typically consolidated among a smaller group of funds, which can often afford to have their own investment staff.

“The biggest difference between the US and continental Europe is the level of intermediation,” says Tom Ross, head of European distribution, William Blair.

“In North America, my colleagues spend most of their time communicating with investment consultants.

“In Europe, we spend the majority of our time visiting and speaking directly with client sponsors. We go to Finland, we go to Sweden, we meet the chief investment officer, we meet the head of equities, we meet the external manager selection team.”

At these meetings, clients are often concerned to know if there will be communication barriers between them and US-based management. Ross is often asked question such as: How are you going to report back to me? Is somebody within my time zone dedicated to this relationship? What access will I have to the portfolio managers?

Success in Europe for up and coming US asset managers can often depend on how they answer such queries.

Of course, having investment staff on the ground in the US is the principle advantage US firms can offer, and it is logical to emphasise this. Some European firms have tried to offer the same service, for instance Swiss private bank Vontobel, which set up an asset management subsidiary in New York.

“It helps to show that our managers are in the US,” says Marc-André Hug, head of product sales, Vontobel Asset Management. “People think they’re closer to the market.”

HERITAGE
Not every firm will face concerns about communication problems. Those that are larger and well-established in Europe may be more trusted. T Rowe Price, for instance, has been present in Europe for many years and has offices in Amsterdam, Copenhagen, Luxembourg, London and Zurich. Peter Priesler, head of Europe, Middle East and Africa, says clients are not usually afraid of lacking information.

However, the company’s status as a US-based player still determines the conversations he has with clients.

“When we walk through a door and introduce T Rowe Price, people think we are probably going to speak about US equities or US fixed income,” says Preisler.

This can be inconvenient as T Rowe Price may want to discuss its other funds covering different asset classes. It may be unavoidable, however, given that, in Priesler’s words, “one’s heritage dominates the assessment of the firm”.

It seems the route to success in Europe for American players is make the most of their heritage while reassuring clients that they are committed to the continent. This means ensuring there are enough staff on the ground in Europe, and keeping the lines open between them and head office. It’s a simple message but essential for any firms hoping to span the Atlantic.