Nicholas Pratt charts the history of Ucits V, the legislative developments to date and the likely challenges of implementation.

The latest instalment of the enormously popular Ucits saga – the fifth in its 40-year history – was formally introduced in July 2012 when the European Commission published a draft directive, Directive 2014/91/EU, seeking to make amends to the regulatory framework for Ucits funds. 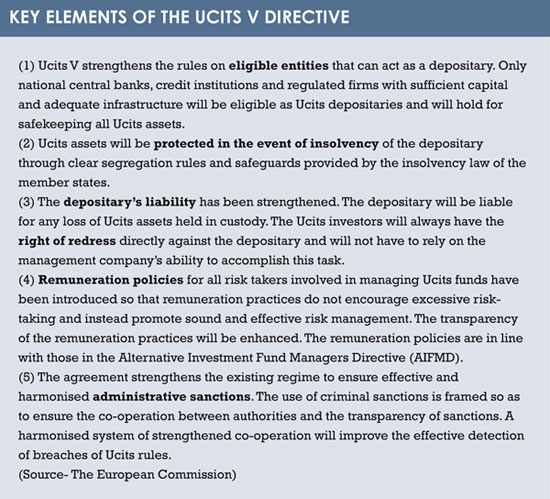 Its predecessor, Ucits IV, was passed by the European Parliament in January 2009 and its principal aim was to bring more efficiency to the cross-border market within Europe. This was achieved by removing many of the administrative barriers for managers looking to market their Ucits funds in other member states.

The paperwork was distilled into one Key Investor Information Document (the KIID) and procedures were put in place for different national regulators to share information. The master feeder structures were introduced to enable managers to choose one domicile from which to market all their Ucits funds across the EU, and the Management Company Passport, which was introduced in 2001 and had hitherto failed to work, was revamped.

Although Ucits IV was approved in 2009, the initial draft was published several years before, prior to the two seismic events of 2008: the Lehman Brothers bankruptcy and the Madoff investment scandal. Ucits V is therefore focused on familiar themes – oversight, governance, investor protection, transparency and regulatory consistency – all designed to maintain investor confidence in the Ucits brand both within Europe and worldwide.

As Internal Market and Services Commissioner Michel Barnier said at the time of the original proposal: “In the aftermath of the biggest financial crisis in recent memory, the financial sector must place consumers at its heart.” And once Ucits V was adopted by the European Parliament, Barnier reiterated this message. “With this vote, we have taken another important step towards making financial products safer and re-establishing investor confidence, a pre-requisite for investment and economic growth in Europe.”

THE TIMETABLE
The original proposal for Ucits V was made in July 2012 and, following the traditional delays, industry lobbying and political wrangling, was approved by the European Parliament on April 15, 2014, just three days before the end of term. In the intervening 22 months, the fiercest debates were over the remuneration policies. Certain MEPs were keen to impose further requirements such as the inversion of performance fees in negative performance periods and bonus caps. These proposals were voted down. 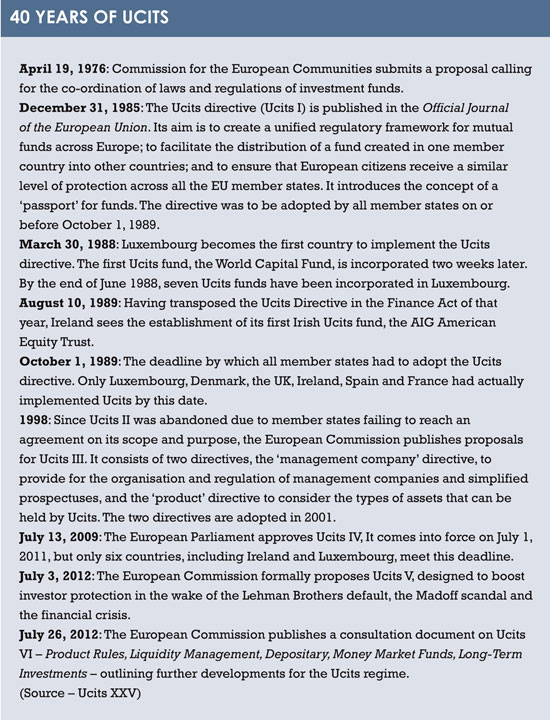 Following the publication of the new rules in the EU’s Official Journal, the task now facing the industry is to meet the 18-month implementation timeframe and have the Ucits V framework transposed into national law in time for the current deadline of March 18, 2016.

Ensuring the smooth progress of Ucits V has now fallen to the European Securities and Markets Authority (Esma), the body that is typically responsible for working out the practicalities of turning parliamentary legislation into workable market rules. In March 2015, Esma published its regulatory work programme for the next year, which reiterated the March 2016 deadline for transposing Ucits V into national law and also set a September 2015 deadline for implementing technical standards for regulatory authorities on penalties and enforcement measures.

Esma is also due to issue further guidelines on remuneration later this year. Speaking at the recent fourth annual Funds Congress in Ireland, Gareth Murphy, director of markets supervision at the Central Bank of Ireland, highlighted how the alignment with the AIFMD will be a key focus for Europe’s supervisors. “The general starting point, which indeed is part of the legislative mandate, is the AIFMD remuneration guidelines.

BEYOND UCITS V
It is not uncommon for authorities to consider the next regulatory step before the current one has formally begun, but the fact is that the so-called Ucits VI proposal was published in the same month (July 2012) as the Ucits V draft was published (see ‘40 years of Ucits’). Given that there is on average a four-year cycle from initial draft to full implementation, it is perhaps wise to start early.

In addition, the European Commission has also suggested in the Ucits V impact statement that it will carry out an economic evaluation three years after Ucits V is implemented, to assess whether the amendments have achieved the stated objectives of increasing investor protection, enhancing transparency on remuneration and renewing investor confidence in the Ucits brand. The findings will most likely form the basis of the next instalment of the Ucits story.