The Alternative Investment Fund Managers Directive is draining resources of transfer agents at a time when price raises for their services seem near impossible. Stefanie Eschenbacher explores the consequences.

Even though the Alternative Investment Fund Managers Directive (AIFMD) does not directly regulate transfer agents, they are being scrutinised by depositaries answerable to fund managers.

Transfer agents used to be out of the scope for monitoring, but this is changing with the AIFMD.

Depositaries are taking on strict liability for the assets they hold, which in turn is driving the monitoring requirement.

Roger Fishwick, director and chief risk officer at Thomas Murray Data Services, says the business model of transfer agents is already changing as a result of the AIFMD.

“They no longer just have challenges around resources,” Fishwick says.

“There is a challenge in facing up to this scrutiny by becoming increasingly transparent and committing to maintaining lengthy questionnaires that are required by the depositaries, and even accommodating due diligence visits from depositaries, which is all new to them.”

HIGH STANDARDS
Lotfi Baccouche, partner at Parker Fitzgerald, warns that this is going to be “disruptive”, adding that transfer agents are already revisiting their business model.

“The directive applies high standards and requires a lot of work across the whole
asset management chain,” comments Baccouche.

“While the transfer agents are not directly affected from a regulatory point of view, their clients and their clients’ clients are under a lot of pressure.”

Baccouche says that a lot of work still needs to be done when it comes to the additional reporting by transfer agents, such as improving accuracy, speed and frequency.

These additional responsibilities are devouring resources; transfer agents will have to invest in technology and expertise, adding to their overall operating costs at a time when price increases seem
near impossible.

BIG QUESTION
“Whether they are going to be able to pass these costs on to their clients remains a big question,” Baccouche says.

It is smaller transfer agents whose existence will be under threat. Baccouche says larger ones will be able to spread the costs, resulting in prices being increased by between 10 and 15 basis points.

“We have seen much higher raises than this,” he adds. “The attitude is that there is no upside to the AIFMD.”

While some have invested in technology and created an additional reporting capability, marketing their reporting as a value-added service for their clients, others struggle to survive and simply aim to comply in the most cost-effective way.

“It will take the asset management industry some time to accept the idea that this is a value-added task and that this is probably money well spent,” Baccouche says.

Fishwick says transfer agents will have to find a way of embracing the increased workload into their daily routines.

“This is, without doubt, the biggest challenge under AIFMD facing transfer agents,” Fishwick says. “There are other threats to their business lurking in the form of Target2-Securities, so this is not really a time for them to be pursuing price increases, generally,” he adds.

Another question is what depositaries feel comfortable with. They will have to monitor the entire investment chain. In addition to transfer agents, this includes custodians, sub-custodians, prime brokers, collateral agents, cash correspondents and fund accounts. Mathilde Guerin, global head of network management, at Societe Generale Securities Services, believes there will be clear preferences among depositaries to work with large, perhaps bank-backed, transfer agents that have standardised, regulated processes.

TAKE RESPONSIBILITY
Small transfer agents – “three people working in an office with a fax in the Bahamas”, as Guerin puts it – may not have standardised reporting and irregular reconciliation.

Guerin says depositary banks that do not wish to take responsibility for risky assets will ask the asset manager to free them from responsibility.

“That is where the risk lies,” she says. “Those small transfer agents might disappear in the future.”

Fishwick shares this line, adding that because of data protection laws it is difficult to envisage the use of offshore domiciles for those that are not already offshore.

“Besides, they cannot run away from AIFMD and the new international tax laws that are coming into force,” he says.

There is still a place for small transfer agents, operating as niche players. Not all funds will fall under the AIFMD or Ucits V, and Baccouche says there are locations where local regulation requires a local transfer agent.

Apart from an element of potential regulatory arbitrage, there are also large and fast-growing markets in Asia where asset managers will not at all be interested in the AIFMD.

Baccouche adds: “They still have a niche to play there, but some of the European players might consider changing address to survive.”

LITTLE LEVERAGE
The complication is that, unlike sub-custodians and prime brokers, there is no contractual relationship between the depositary and the transfer agent. 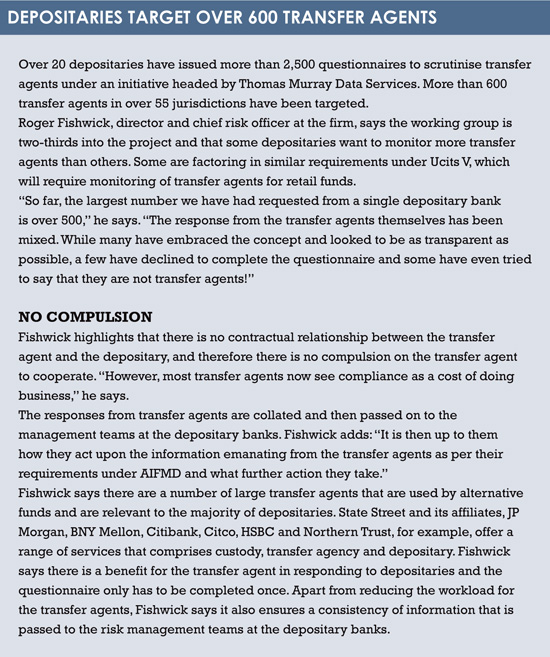 Depositaries, therefore, have little leverage. They do not choose the transfer agent, which is chosen by the asset manager, but they are still responsible as long as the fund is registered in the name of the depositary bank.

Asset managers that choose transfer agents with whom depositaries are not comfortable with because they do not consider them as secure will lose their investors, Guerin says.

Fishwick also goes on to comment that the challenge faced is no longer just concentrated around resources.

The working group has created a standard questionnaire that is sent out to all transfer agents for all banks that subscribed to it, and the answers are passed back on to the depositary banks.

Fishwick says some depositaries are looking to monitor more transfer agents than others, with some factoring in similar requirements under the Ucits V Directive.

Based on this questionnaire, compiled with 12 major banks, Societe Generale Securities Services has also implemented an internal monitoring procedure that takes into account of credit ratings, operational feedback and feedback made by the trustee departments.

Guerin says this monitoring is now being implemented, adding that it is a significant addition to what was previously simply operational monitoring.