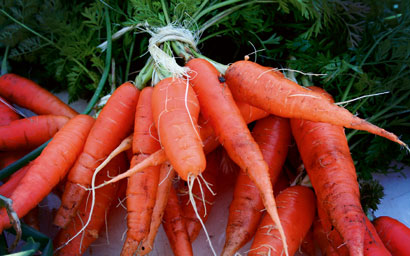 Among the straight carrots, bright yellow bananas and glossy round apples in my supermarket – which is, I have to confess, the eye-wateringly expensive Waitrose – you can these days find bags of ‘weather-blemished apples’. These apples are less perfectly round than their neighbours and, as their name suggests, they have some marks. Not too many, mind. It is Waitrose.

If you want truly misshapen and marked apples (and ones that actually taste like apples), you have to go down the road to Roots & Fruits, a wholefoods grocery shop with two outlets in Glasgow, or IJ Mellis, an artisan Scottish cheesemonger. And that tells you quite a bit about who is leading the drive towards reducing food waste and consuming food in a more sustainable way: small businesses and community initiatives.

Last year, designated European Year Against Food Waste by the European Union, France’s third-largest supermarket, Intermarché, launched a campaign entitled ‘Les fruits et légumes moches’, selling imperfect fruit and vegetables at a 30% discount. However, certainly in developed markets, misshapen fruit and vegetables are mainly found in small retailers or through initiatives such as Fruta Feia, meaning ‘ugly fruit’, a Portuguese co-operative that sells fruit and vegetables that don’t have the perfect look demanded by main distribution chains – part of the 30% of crops produced in Portugal that are wasted.

“The main goal of the Fruta Feia project is to channel that part of crop production to consumers who do not judge the quality by the exterior,” says Isabel Soares, the environmental engineer who set up Fruta Feia. “The project aims to end this market inefficiency, building a brand and a movement that can change current consumption patterns, and finally creating a market for ‘ugly’ fruit.”

Food waste is just one of the many issues associated with investing responsibly in food production. Others cited by Rosl Veltmeijer, head of Triodos Research, include: environmental impacts such as deforestation; food security; food quality; animal welfare; and genetically modified organisms (GMO).

Finding major food producers that deal with all these issues in a responsible way is difficult. In fact, even knowing exactly how these issues are dealt with across the supply chain can be hard.

“It’s difficult to trace what is happening in the supply chain,” says Veltmeijer. “We don’t know what is going on in a soy field or a palm oil plantation in Indonesia and so we demand awareness from companies and transparency in the supply chain.”

With the global population predicted to rise from 7 billion at present to 9 billion in 2050, investing sustainably in food production is ultimately about nothing more or less dramatic than saving the planet. Rabo Farm, which invests in farms, farmland, farming infrastructure and agricultural production and is part of Bouwfonds Investment Management, the real asset manager of Rabobank Group, sets out the parameters pretty starkly in a corporate video entitled Global Food Security: A Shared Responsibility.

“If we continue consuming as we are today, we will need the equivalent of two planets Earth by 2040,” the film says. “If everyone lives like an average resident in the western world, a total of up to four planets Earth would be needed to regenerate humanity’s annual demand on nature.”

As finding a couple more planets looks like a tricky task, the scale of the problem is clear. However, addressing the headline problem as investors is difficult – perhaps impossible.

“Global sustainability is too big of a picture to be thinking about,” says Roberto Lampl, head of Latin American investments at Alquity. “Some companies are responsible. I focus on those.”

Investing on a best-in-class basis, Lampl takes the view that food companies that behave responsibly towards their customers and shareholders will thrive in the long term. Where there is a campaign, for example against child obesity in Mexico, companies that encourage the ill in question will lose.

“There is a competitive force that means other companies can easily come in and introduce new products and steal away customers,” he says.

PROTEIN POWER
An example of a company that Lampl believes has the right strategy is Marfrig, one of the largest protein companies in Brazil. Through Moy Park Limited, a subsidiary in Northern Ireland, Marfrig distributes protein in the UK and Europe to the likes of Keystone Foods and KFC.

“What I like about this company is the impressive amount of data they have on environmental impact and what they are doing to reduce that,” says Lampl.

Some folks, of course, wouldn’t darken the door of KFC, which just goes to show what a movable feast investing responsibly can be, especially in the food sector. As always with responsible investment, there is a choice to be made between setting standards and sticking to them and investing in best-in-class companies, as Lampl does.

It can also be difficult to set the same standards across the board. Lampl cites the example of China Mengniu Dairy Company, a manufacturing and distribution company of dairy products and ice cream in the People’s Republic of China, based in Hohhot, Inner Mongolia. The company “had some issues”, Lampl says, but he nonetheless considers it a good investment.

“China is a difficult and risky place for food production,” he says. “Food safety is a big theme in some countries. Most responsible companies take that seriously.”

For anyone who lived in China in the 1980s when no one ate any dairy and everyone had brown teeth, China Mengniu Dairy Company highlights another issue. An older and wealthier global population, which is changing its diet to consume more protein along western lines, doesn’t just create a problem; it also creates solutions to certain health issues.

In any case, says Lampl, “there are protein substitutes, and the whole world isn’t going to be consuming protein like Argentina”.

In the food production sector more than other sectors, it seems, running a very tight ship can leave you with few options. Currently, there are no major food production companies in the Triodos universe, for example, because none of them meet the company’s standards.

“Heinz comes very close,” says Veltmeijer. “It’s one of the few companies that has a clear policy on avoiding GMO, but its factory farming standards are not high enough for us.”

In any case, now that Heinz is merging with Kraft, its policies may change.

The food production companies that Triodos does invest in usually have good labour standards and a mission to offer organic produce that is locally sourced. They include the likes of SunOpta, WhiteWave Foods, Hain Celestial and Keurig Green Mountain.

These are not very small companies, along the lines of my local two-outlet organic grocers, Roots & Fruits, but neither are they household names.

Triodos Investment Management has plenty of household names in its list of companies eligible for investment – Gap, L’Oréal, Vodafone, to name but a few – just not in the food production sector.

THE GMO TREND
This is not a situation that is likely to change, partly because of GMO. In the US, unlike in Europe, food production companies are not obliged to label foods to show if they contain GMO, and the momentum is in favour of GMO.

While in the past, almost all companies had a clear position of avoiding GMO, that has now changed.

“It’s a trend that cannot be stopped,” says Veltmeijer.

Some will argue that GMO is a trend that doesn’t need to be stopped, but Triodos Investment Management doesn’t see it that way.

“Studies prove that using GMO makes soil degrade in the long term,” says Veltmeijer. “In the long term, there is a loss of biodiversity and yield, so food production doesn’t increase where GMO is used.”

Food is the ultimate non-cyclical investment. The fact that we all need it places an additional burden of responsibility on producers, investors and consumers.

The power to encourage sustainable food production and food safety ultimately lies with consumers. But to make the right choices, consumers need information. Sometimes they get that information because of corporate failures. “Every time a scandal pops up, people become more aware of the food that they buy,” says Veltmeijer.

“Sometimes the policies of a smaller, sustainable company are taken over by the larger, acquiring company and sometimes they are not,” says Veltmeijer.

“Packaged goods and responsible nutrition has been the best-performing risk-adjusted sector for investment over the past 25 years,” says Lampl. “It’s a wonderful long-term theme.”