What this survey reveals.

The argument for process automation in the funds industry has long been won but there remain several areas where manual intervention persists, effectively reducing the overall efficiency of the market. But where do these gaps exist and why? What can be done to encourage more automation adoption? Will the global economic headwinds focus firms on the long-term operational costs savings provided by automation? And will the rise of fintech and digital technology finally help bring about the level of straight-through processing (STP) seen in other sectors?

In partnership with Calastone, the largest global funds network, Funds Europe sought to find the answers to these questions and more with what is our most comprehensive research project to date. During July, more than 600 funds professionals in 39 countries took part, with 12 of those countries featured in the survey’s regional breakdown.

The aim of the survey was to get an accurate picture of the state of automation across the globe; the relative levels of automation for various processes; the different drivers to increase the use and adoption of automation; which operational areas have been prioritised for more automation; and what sort of new technology will be used to improve automation rates. 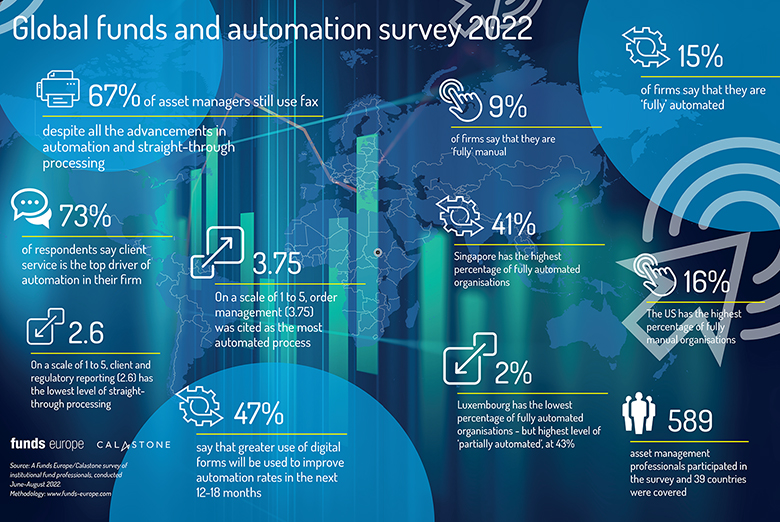 Among the survey’s headline findings:

Client service the big driver
• 73% say client service is the top driver of automation in their firm, followed by operational cost reduction (60%) and revenue expansion (50%)
• Geographical expansion (22%) and regulation (47%) were cited by the fewest respondents

This suggests a disconnect between the perception of automation and the reality.

Digital technology holds the key for improving automation
• 47% said that greater use of digital forms will be used to improve automation rates in the next 12-18 months along with robotic process automation (35%) and machine learning/AI (33%)
• Despite all the advances in digital technology, 67% of firms still use fax

1 Introduction: The key to improvement