Our survey results (figure 6) show that the majority (74%) of firms have not suffered any lasting impact on their operations. This is in keeping with the general trend in financial services as a result of the pandemic. Business contingency plans kicked in and critical processes such as NAV calculations held up over the longer term, even though there was some initial disruption in the early weeks of the lockdown. Some of this was down to technical adjustments and some of it was a result of the severe volatility in the market that made it difficult to price assets accurately regardless of any technology issues.

From an operational perspective, the pandemic has proved to be an opportunity to rethink longstanding practices. Firms managed very quickly to move from paper-based back-office processes performed in heavily populated offices to digitally driven remote working. The pandemic also accelerated the adoption of automation, as firms were forced to address operational inefficiencies. Responses in the survey show that firms have ceased paper-based reviews and data checks. Many firms are now entirely paperless as a result of the pandemic. Faxes are no longer sent because there was no one in the office to take them out of the machine. 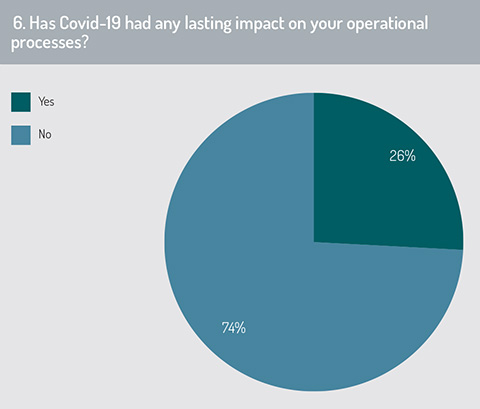 The pandemic also highlighted the importance of business continuity planning (BCP) and contingency. Firms will have reviewed their BCP strategy to see where more work needs to be done. Regulators have also noted this. In the UK, the main financial regulators – the FCA, the Prudential Regulation Authority (PRA) and the Bank of England – have issued new rules for operational resilience. These require all financial services firms to review their processes, including NAV production and oversight, identify their vulnerabilities and put suitable contingencies in place. The SEC has announced similar plans, as well as a greater focus on how firms determine the fair market value of their funds, in case of operational failures.

So, while there was no market crisis at the outset of the pandemic and no long-term operational impact from Covid-19 for 74% of firms surveyed, there is no reason to be complacent. To the contrary, there are plenty of opportunities to act on what has been learned about new ways of working and the potential to develop new operating models.

When asked to select their biggest operational challenges in terms of NAV production, 53% cited data management (see figure 7). The second most cited challenge was a lack of automation (41%). It is possible that the two are related – data management is made harder by a lack of automation, and automation is harder to implement because there are so many sources of data, many of them unstandardised. This is most evident in figure 10, where 47% of firms said they use four or more sources of vendor data. 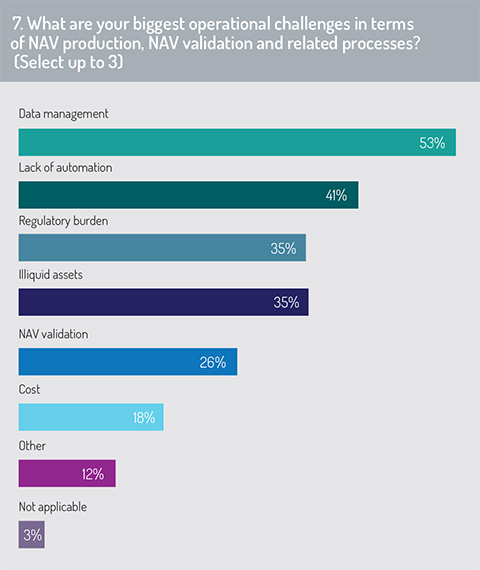 Not all firms can afford to invest in automation; however, cost was cited by just 18% as an operational challenge. Technology does generally become more accessible as it matures, and the technology associated with digital processes and automation is no longer new and is becoming well established. Furthermore, the pandemic has helped make technology investment more compelling. Projects that have been pending for long periods have been given approval and IT budgets have been given priority.

Meanwhile, regulatory burden was cited as an operational challenge by more than a third (35%). While reporting requirements can be a driver for investing in operations and automation, the ongoing expense of regulation can complicate the business case and make it difficult to free up the necessary capital.

Additional comments related to the lack of software functionality, which results in multiple manual or Excel calculations. These exceptions will be especially prevalent in illiquid assets (cited by 35% as an operational challenge). Finally, NAV validation was also cited by 26% as one of the biggest operational challenges while “existing NAV validation product” was cited by one of the respondents. This suggests that the NAV oversight market is still relatively immature.