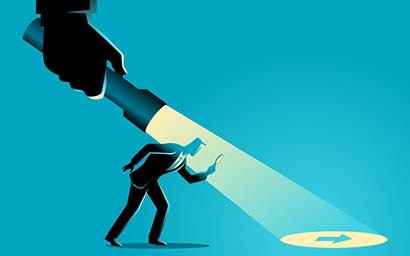 Determining a fund’s net asset value is a vitally important process – but our industry survey found plenty of room for improvement.

NAV oversight is a critical process for asset managers but one where best practice is still developing. Various factors affect the approach taken, including the size of the organisation, embedded systems and practices, whether NAV production is performed internally or outsourced to a third party, and pressure (or lack thereof) from regulators, investors and other stakeholders.

The starting point is of course NAV production. Our survey (figure 1) shows that more than half (54%) of respondents are using a third party to produce their NAVs. However, a significant number (38%) still produce their own value. Both approaches present challenges. On the one hand, the valuations process has become more complex as funds increase in both number and complexity. This has led many firms to turn to third parties both for their expertise and to reduce their overheads. On the other hand, outsourcing a process to a third party creates problems over control. 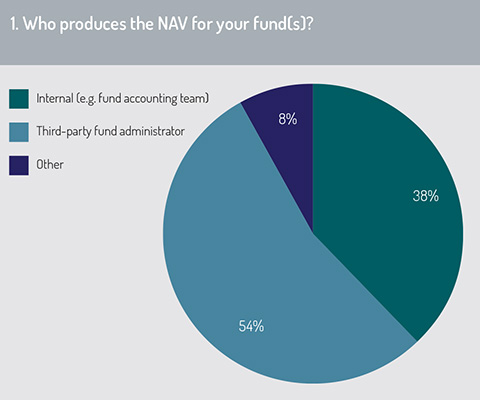 What these figures suggest is that there is still a significant issue with NAV timeliness and accuracy, whether produced in-house or externally.

These issues came to the forefront when the Covid-19 pandemic sparked global market turbulence and a shift to remote working. While most firms adapted quickly to the new operational model, remote working did lead to NAV publication delays in the short term, and the need to rethink business continuity planning (BCP) and operational resilience. 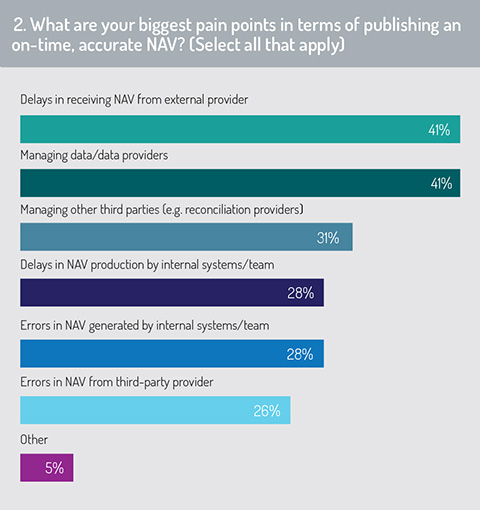 Given these concerns, one would have expected a higher percentage of firms to have a robust oversight solution in place. Our survey (figure 3) shows that just over half (51%) of respondents have systematic NAV oversight in place, while a very small number (5%) do not carry out any additional validation at all.

Significantly, just under half (49%) use spreadsheets for such checks. In this day and age, spreadsheets are rarely able to provide the accuracy and scale and sophistication needed for something this important.

“Best practice would be to avoid using spreadsheets for NAV oversight,” says Matt Grinnell, product manager at Linedata. “Regardless of where the NAV is struck, firms should also ensure true segregation of duties between the teams and technologies used for NAV production versus oversight.”

However, cost is an inevitable and unavoidable factor in such operational decisions, says Grinnell.