There are two contrasting but related ways that the funds market landscape will be reshaped over the next decade – either through consolidation among the traditional players or disruption from new entrants. Our survey addressed both of these issues.

The survey also asked what part of the funds distribution ecosystem would be most susceptible to disruption by fintechs or other new market entrants in this decade (figure 8). Two answers stood out – firstly, fund platforms (45%) and secondly, advisers (32%).

There is perhaps an irony in fund platforms being seen as ripe for disruption, given that the fund supermarkets that hit the market at the turn of the millennium were then seen as the disruptors of the day. This survey finding also underlines how quickly innovation can move and how the disruptors of the past become the disrupted of the future. 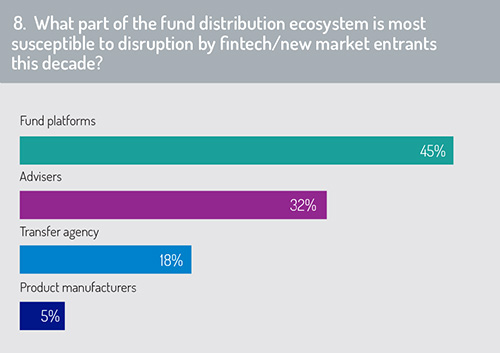 In recent years we have seen the onset of consolidation in the platforms sector, both between rival platforms looking to build scale and from asset managers looking to broaden their own offering. A FundsTech panel debate in May 2019 looked at this very subject, asking if the same platforms that revolutionised fund distribution in the 90s now needed a technology reboot of their own.

It could also be argued that advisers have already been subject to disruption from the growing robo-adviser market. However, the survey results suggest that almost a third still believe there is room for further disruption from tech-enabled entrants. Perhaps we are only in the early stages of robo-advisory and the next wave of offerings will make greater use of artificial intelligence and machine learning, thereby ensuring a greater predictive ability and more advanced analytics, rather than the bot-based offerings that simply automate the investment process.

Perhaps surprisingly, transfer agency (TA) was cited as most susceptible to disruption by fewer than one in five (18%). This makes sense given the importance of TA in firms’ distribution strategies (figure 9). TA is viewed as a key cog in the fund distribution chain, sitting at the intersection of funds and investors. 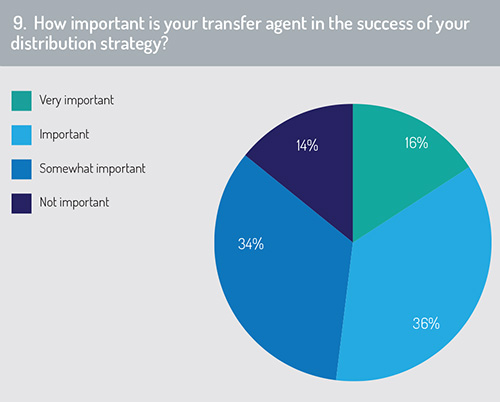 This suggests that the imminent demise of the TA through the rise of DLT predicted by so many may be some way off yet. This is not to say that transfer agency technology is not likely to change, just that we are likely to see the incumbents continue to dominate by upgrading their capabilities or partnering with fintechs.

In a December 2020 article, FundsTech spoke to a number of transfer agents about why they are unfairly held up as an example of the industry’s inefficiency, be that as one more intermediary on the processing chain or as a service provider reliant on legacy systems rather than digital technology.

As Citi’s Global Head of Transfer Agency Operations, Owen Carroll, told FundsTech, TAs have made great strides in reducing the number of systems they use. “I think we give ourselves a hard time in the TA market over the amount of consolidation we have done. Over the last ten years, I have seen a lot of progress in reducing the number of systems,” he said.

This is not to say the process will be without challenges, added Carroll. “We can get there, but in the interim, we’re trying to find how we can best add value to the investor experience.” The pandemic has helped TAs to move further away from the use of legacy systems and paper and embrace new, digital technology.

“There is an opportunity to reimagine ourselves coming out of this latest crisis,” said Carroll. “But if we can make systems more cost-effective as well as nimble, that might help to make the speed of change quicker over the next three to five years, compared to what we have seen over the last ten years.”