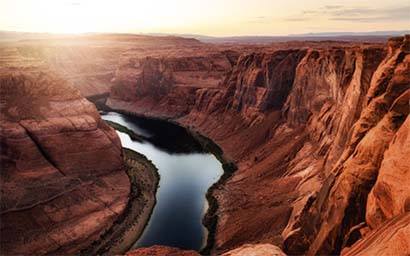 Luxembourg and Dublin have enjoyed continual growth over the last decade, thanks largely to two factors – the durable appeal of cross-border Ucits brands and an effective cross-border distribution process. But this is not to say that the Ucits brand does not face challenges or that distribution cannot be improved.

Regulatory barriers
Somewhat predictably, administrative costs are the biggest current limitation on the sale of cross-border funds (see figure 5). This cost is most keenly felt through regulation, including AML and local rules, as well as marketing requirements which are also seen as too high.

The growth of the regtech market has been a feature of the last decade and many of these start-ups have focused on the cross-border funds market with the objective of reducing the costs of both compliance and marketing through efficient data and document management. 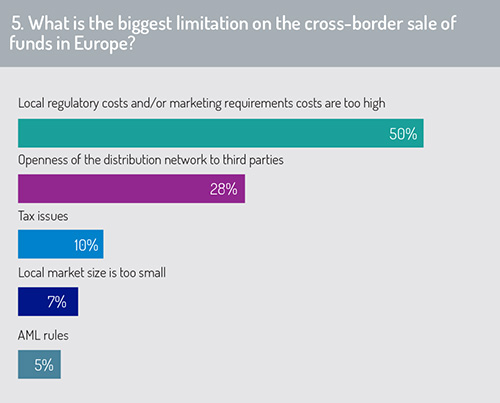 Clearly these administrative processes, from AML compliance to customer onboarding to key investor information documents, continue to frustrate fund managers, despite the growth in adoption of automation and the use of artificial intelligence and machine learning.

But the use of this technology should not be limited to regtechs. Asset servicers have developed their own data management tools and services. And even the regulators have experimented with the latest technology. Indeed, in the UK, the Financial Conduct Authority has run several pilot schemes on the use of machine-readable rules in the hope that it will drastically reduce both time and the cost of compliance.

Open asset management
The lack of openness of the distribution network to third parties was the second most noted challenge (28%). The funds market may look enviously at the retail banking market where open finance/open banking has been a key development of the last five years. The concept is based on the use of APIs and permissioned access to customers’ banking data in order to create a more efficient payments and banking market throughout Europe.

While the same ‘open’ concept does not exist in Europe’s market, the EU is set to introduce the Capital Markets Union (CMU), which it describes as its plan to “create a truly single market for capital across the EU”. The aim of the CMU is “to get investment and savings flowing to the companies and projects that need them across all Member States, benefitting citizens, investors and companies, regardless of where they are located”

Regulation was also cited as the biggest challenge facing Ucits funds over the next decade (see figure 6) and was selected by 40% of respondents. The second-highest answer referred to the limitations on assets and strategies allowable under Ucits rules (30%). This is an issue that the Ucits brand has continually dealt with since it was first launched in 1985. 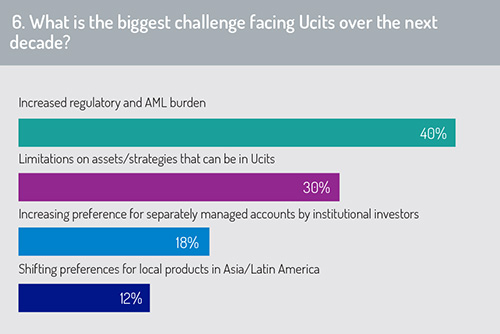 Since then, there have been five updates of the Ucits framework (the latest proposal is Ucits VI), each designed to allow more flexibility for fund manufacturers while still providing the investor protection that is integral to the Ucits brand. In the past, this has involved the use of derivatives, or the use of alternatives – as typified by the emergence of the so-called Nucits funds of the early 00s.

The survey suggests that this balance will need to be continually struck as new asset classes and strategies emerge, not least the use of or exposure to digital assets. And even then, there remains competition from a shifting preference among investors for separately managed accounts (18%) or for local products in Asia or Latin America (12%).

Developments in distribution
Distribution remains an integral part of the investment process but one that can still be improved by a reduction in cost and an increase in efficiency. It is clear that the industry would welcome ways to reduce the administrative burden it faces, especially in the pre-sale process (figure 7).

One way would be a reduction in regulatory requirements (30%). However, this may be wishful thinking. While a ‘reduction’ may be unrealistic, it’s possible that this decade will see a slowing in the addition of new requirements. 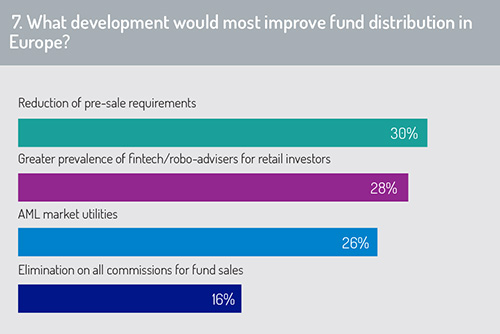 A more realistic ambition would be the development of services and tools that can streamline the pre-sales process. For example, the idea of an AML utility was cited by more than a quarter of respondents (26%). The funds industry does not have a great track record when it comes to utilities. The failed attempts to establish a utility for trade matching (the Global Straight Through Processing Alliance, back in the early 2000s) is evidence of this.

However, the Legal Entity Identifier project set up in the wake of the financial crisis has made progress and the development of blockchain or distributed ledger technology (DLT) could yet help to make the concept of a utility more realistic.

And if the industry can’t come together to solve its problems, then there is always the possibility that a new entrant from outside will do so, as can be seen by the survey. The greater prevalence of fintechs and robo-advisers is seen as a way to improve fund distribution in Europe.

This could prove to be a fascinating dynamic over the next decade. Will the traditional intermediaries in the distribution process, such as the transfer agents, still be present in ten years’ time, or will they be disintermediated by the arrival of new fintechs? Will DLT allow for a whole new distribution process or will the likes of big tech firms such as Amazon be able to make their distribution networks as effective in the funds world as we have seen in e-commerce?