The Swiss franc has appreciated against the dollar over the years, tempting fund managers to take on additional currency risk to boost overall performance. Stefanie Eschenbacher finds speculative currency investing is a dangerous move.

If “whatever it takes” was the most-quoted phrase from the European Central Bank in recent history, the Swiss equivalent was “unlimited quantities”.

The Swiss National Bank pledged in September 2011 to buy “unlimited quantities” of foreign currencies to force down the value of the rapidly appreciating Swiss franc amid turmoil in the eurozone.

It also pegged the Swiss franc to the euro, effectively devaluing the currency. This currency peg is still in place, with one euro worth 1.20 Swiss franc.

Michal Novak, manager of the JB Swiss Franc Bond Fund at Swiss & Global, says a fairer rate at the time of the peg would have been 1.35 Swiss franc.

Today, Novak estimates that the real value is closer to 1.26 Swiss franc or lower.

“The Swiss franc has always been a safe haven currency, sought after when there is economic stress, and the past five years have certainly been the most stressful ones we have ever had in Europe,” Novak says. “That was the main reason why investors were coming into the Swiss franc, but the safe haven-effect is ebbing away now.”

Novak says a lot of progress has been made in Europe and the willingness to invest in Swiss franc is waning as a result. 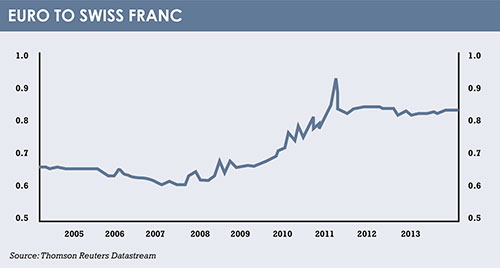 This is not reflected in official data yet. Swiss promoters’ franc-denominated assets under management have risen from 258.4 billion Swiss franc five years ago to 379.1 billion at the end of April, the latest month for which the Lipper data was available. The market share of Swiss franc-denominated investments has increased from 45.4% to 50.6% over the same time.

“Even if the foreign currency risk against the euro is minimal, it is not against the dollar or the pound,” he adds, Lipper data does not break down who these assets belong to, and it is not clear whether investors in Switzerland are increasing their home bias further or if foreigners are deliberately seeking Swiss franc-denominated investments.

Kober says Swiss franc-denominated investments are potentially an interesting exposure for foreign investors, but warns that taking currency bets is not a strategy without pitfalls. 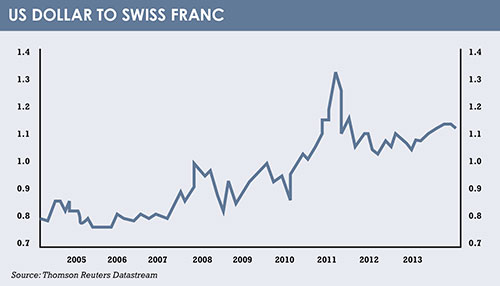 “That is a dangerous game,” he says. “These investments can go heavily wrong.”

The question of where a company is headquartered or listed has lost importance.

Giant food and beverage company Nestlé, for example, is headquartered in Switzerland and has its primary listing on the Six Stock Exchange, but derives more than 98% of its earnings from outside Switzerland.

“Investors normally look at a specific company first and as a second thought, they look at what the currency is going to do,” Wiedenmann says.

While speculative gains from currency movements are tempting for fund managers, many actively avoid it.

Martin Arnold, senior research analyst at ETF Securities, says those were developed because there was investor demand.

The products were specifically designed to provide investment solutions across the main commodity sectors, including precious and industrial metals, energy and agriculture, while mitigating the effects of currency volatility in the portfolios of Swiss franc investors by reducing exposure to the dollar, the currency in which most commodities are priced.

Arnold says there has been strong interest in hedged strategies, adding that 45% of the risk of an unhedged portfolio is currency risk.

Wiedenmann agrees, adding that investors generally try to avoid currency risk and Swiss investors have intensified their home bias because of their strong home currency.

“This has always been an issue,” he says.

The Swiss franc tends to appreciate against the dollar for two reasons: the Swiss economy has a large current account surplus, and the inflation in Switzerland tends to be much lower than in the US. Unlike its European neighbours, it also regularly puts out sound macroeconomic data.

Jonathan Davies, head of currency, global investment solutions, at UBS Global Asset Management, says if the aim is to get exposure to the Swiss franc, there are a lot more direct and efficient ways of achieving this than investing into the Swiss stock market. 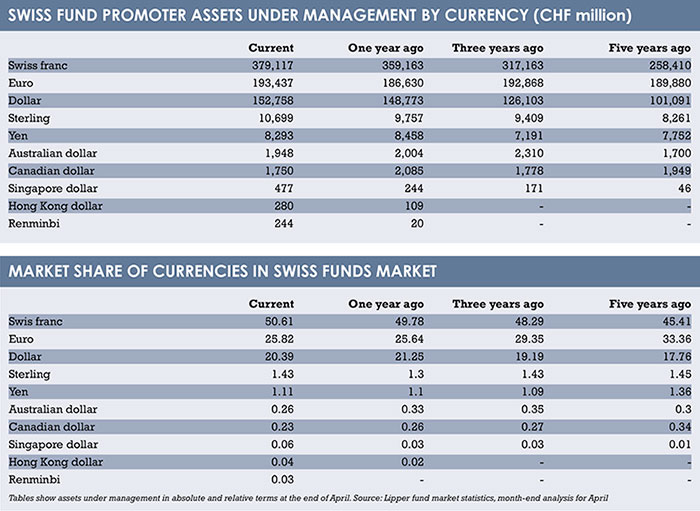 Davies says Swiss bonds might be an interesting option for those seeking currency exposure, but with the exception of supranational bonds and some corporate bonds, most bond investments are subject to a withholding tax.

The other option is via the forward market; the Swiss franc is a liquid currency that is very easy to trade.

However, Davies says the room for further currency appreciation of the Swiss franc is probably limited, given the policy of the Swiss National Bank.

“Governments and monetary authorities wish to avoid being seen to deliberately devalue their currencies as this would be deemed unfair by the international community,” he says.

Despite the historic strength of the Swiss franc versus the dollar, Stuart Edwards, global bond fund manager at Invesco Perpetual, says it is not an area he has chosen to focus on.

“I find more interesting opportunities elsewhere,” he says, adding that he is positive on the dollar over the medium- to longer-term. His view is based on the expectation that the US Federal Reserve will need to start raising interest rates soon or at least commencing the discussion, which itself can move markets.

The US current account is improving, helped by the energy story and the US economy overall is doing better than many of its counterparts such as the eurozone.

Edwards says his view is that the dollar will do better against the euro, not the least because the European Central Bank is still easing monetary policy while its US counterpart is reigning back on easing. By extension, he adds, the dollar should also do well versus the Swiss franc.