The rate of failed trades is to rise when Switzerland and the rest of the European Economic Area shortens settlement cycles by one day later this year. Stefanie Eschenbacher finds Switzerland may be better prepared than its peers.

Switzerland has distanced itself from the rest of the European Union, most recently with a controversial cap on immigration, but it has embraced financial reform and regulation from Brussels.

Together with the rest of the European Economic Area, Switzerland will migrate to a common regulatory framework for securities settlement across the European Union in 2015.

The Central Securities Depositories Regulation mandates the introduction of a shorter, harmonised, settlement cycle. Under T+2, which will be put in place on October 6, securities transactions will settle two business days after trade date rather than three.

Tony Freeman, executive director of industry relations at Omgeo, says Switzerland is likely to be better placed to cope with the shortened settlement cycle than its peers.

“Switzerland, right up with Japan, has some of the most efficient users of technology,” Freeman says.

“Taking a whole day out of the settlement cycle is a problem, but Switzerland is qualified to manage it.”

However, the rate of failed trades is likely to rise. Chris Smith, head of post-trade services at Trax, says most markets currently see a trade failure rate of between 1.5% and 2%. This number is slightly higher for fixed income transactions.

“This equates to lot of money,” Smith says. “This money has to be found on the balance sheets of banks, and banks are already under increasing pressure.”

Freeman says that the industry got used to such high trade failure rates and accepts them as “a good figure”, adding that regulators deem them too high.

He says: “Failed trades cause extra operational costs, sometimes penalties are applied on top of that, but those need to be much greater.”

In addition to the costs caused by failed trades, the industry may also face stricter penalties.

The European Securities and Markets Authority closed the consultation period on a discussion paper regarding settlement discipline in May, seeking feedback on its point of view that undesired behaviour in the settlement process should be minimised though disincentives forced upon the market participants.

“If this penalty regime will be enforced, rumours say mid-2015, both the buy- and sell-side will feel its consequence if not addressed properly beforehand,” he says.

“If this proposed penalty set-up is unaltered the buy-side will face operational difficulties complying with instructing on trade date, due to the fact that trading strategies often rely on trading on closing prices,” he adds. 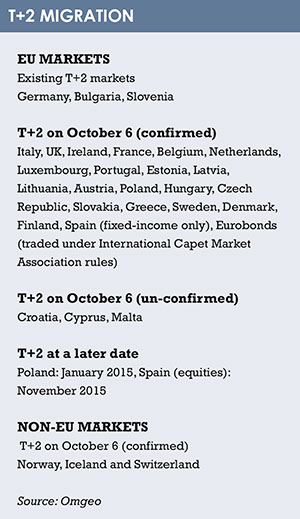 Steur adds that sending settlement instructions on trade date to the central securities depository might prove to be “quite a struggle”.

Smith says the industry needs to reduce these costs and the money that is tied up in failed trades, and make more efficient use of capital. “We have to get a better accuracy of the whole post-trade process so that we can settle successfully on time,” he says.

Germany is currently the only country in Europe that already settles on T+2.

EXCEPTION MANAGEMENT
Smith says those working in international organisations that trade with Germany will say that in order to ensure the trade settles on T+2, there is quite a bit of “exception management” going on.

“Some of the German activity may be taken out of the normal day-to-day cycle of processing in order for it to settle on time,” Smith says.

“That, of course, is not possible if everything settles on T+2.”

Smith says the industry needs to make sure its processes and procedures are more adept, more agile, more capable of handling the flow they need to achieve the moment the trade is struck and the trade is settled accordingly.

“The operational challenges associated with moving to a shorter settlement cycle in October will cause a peak in failure rates,” Smith says. “It is addressable and the industry will sort itself out.”

Isabelle Olivier, head of clearing and settlement at Swift, says a lot of smaller asset managers are still doing a lot of operations manually, which will pose more of a challenge.

All the countries in Europe have committed to T+2 in Europe, and more than 20 countries will move over in October. The regulation forces them to migrate before January 2016.

The only exception is Spain, which will migrate to T+2 in November 2015.

Olivier says she does not expect regulators to delay the deadline of T+2 because it would add to the complexity of the T2S, a European Central Bank project aiming to centralise the settlement operation in the post-trade value chain for nearly all securities on a single pan-European platform.

Olivier says taking out a day of the settlement cycle does indeed mean even more trades may fail.

She adds that every player in the chain needs to go for more automated solutions, more standardised communication.

“There is a need to review the complete process, not just from the asset management side, but from all players, because it also impacts the funding side,” Olivier says. “Earlier funding is necessary to meet the settlement on time.”

Despite the challenges in the short-term, Olivier and her peers are confident that T+2 will benefit the industry.

T+2 reduces the exposure to central counterparty risk and margin requirements by one day; a harmonised regulatory framework should also lead to more efficiency, especially when players are active in more than one country.

Olivier says that T+2 is a worldwide trend and Switzerland has little choice but to embrace this regulation.

She also highlights the example of Russia, which used to be on T+0 some years ago, but is now moving to T+2.

Russia has been trying to attract foreign capital and Olivier says the large players in the market claim that T+0 is too difficult to them: it was not harmonised and created funding issues.

“In order to be harmonised with the rest of the financial markets in the world, Asia, soon Europe, and America, it is a must for Switzerland to adapt to this global change in the settlement environment,” Olivier says.

“There was no choice.”