Global Funds Registration specialises in every aspect of cross-border fund registration and authorisation, as well as delivering an award-winning KIID solution. Martin Neason tells Funds Europe how outsourcing can help relieve the burden of getting funds registered and marketed in multiple countries.

Six weeks is the average time needed to register a cross-border fund – a fund created in one country, and sold in another. But such a bald statement hides huge variations. The time difference between jurisdictions – or the fund registration spread, if you will – can be extreme.

In the experience of Martin Neason, director at Global Funds Registration (GFR), fund managers entering Singapore could register a fund in as little as a week; in Hong Kong, it can take as long as a year.
In Europe, the swiftest countries for registration and approvals are the Netherlands, Sweden and Germany, while the process is more protracted in Italy and Spain. Switzerland also has a lengthier process, as it is outside the EU, though generally complies with Ucits standards.

Lately, Scandinavia has been a hotspot for cross-border fund registration and authorisation. So too has Belgium, while Switzerland is a perennially popular destination. “Many fund managers registering funds in German-speaking Switzerland will then want to have their funds registered in Germany and Austria. Similarly, if the fund is registered in Italian- or French-speaking Switzerland, the pattern will then be to register it in Italy or France,” says Neason.

GFR specialises in registering investment funds in a wide range of locations for clients. The majority of its current business flow centres on funds that comply with Europe’s Ucits rules. Provided the local regulations in host countries are met, any fund that carries the Ucits label can be marketed across Europe, regardless of its country of domicile.

“Much of the work involved in fund authorisation is about getting agreements in place between the fund and its providers,” according to Neason.

VOLUME OF DATA
Ucits funds are also popular among fund promoters in Asia, and among Asian fund managers who want to sell their specialisms into Europe. Similar to Switzerland, Hong Kong and Singapore see the benefits of replicating the Ucits regime to make funds available to their own populations. Even so, the Hong Kong process is clearly longer than that of Switzerland. So what explains the discrepancy between Hong Kong and everywhere else?

“The Securities and Futures Commission (SFC) of Hong Kong looks at such a volume of fund information that it can take four or five months to collect the data, and then another six months for the regulator to examine and approve it,” says Neason.

The SFC examines the operations, stability, and resilience of a fund and even the fund managers’ CVs are required. The regulator wants to know the length of service of the fund managers and any succession plans should the managers leave.

Another strenuous task for registration in the Hong Kong market is to alter a fund’s prospectus to meet local regulatory needs. This means a fund will have to create two prospectuses – the existing prospectus for other markets, and one for Hong Kong.

The complexity of these tasks is why GFR was created in 2007 – to relieve fund managers of the burden of fund registration when they go in search of business in new markets.

As with all operational outsourcing, contracting out the registration process leaves fund management firms to focus on the core business of investing money and selling funds. 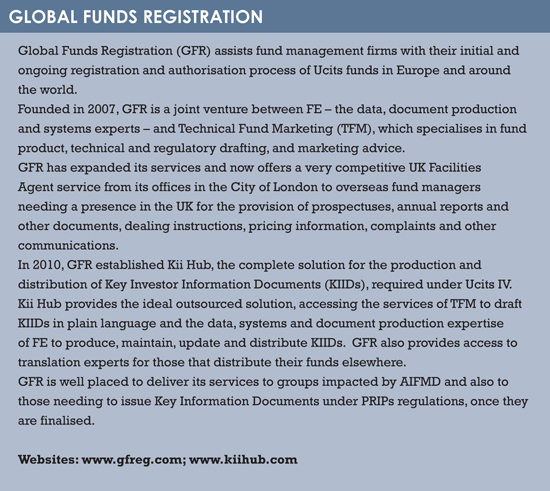 Tasks that can make fund registration time consuming in any market – and can be outsourced – are the sourcing of service providers and the formalising of agreements between these providers and the fund. For example, consider finding a paying agent. A fund’s existing administrator, transfer agent or custodian, despite offering a large, integrated service, may lack the physical presence necessary to provide this service legally in a target market.

LANGUAGE SKILLS
Although Ucits IV reduced the need to translate fund documents – in most EU countries it is now just the Key Investor Information Document (KIID) that needs to be in the local language – certain non-EU jurisdictions still require the prospectus to be translated. Even some European countries, such as Switzerland and Croatia, need all documents in their language.

Arranging the translation of all of these documents and removing another administrative task from the manager is all part of the standard GFR service.

The administrative burden increases as regulations change, as has been the case with the various iterations of the Ucits directives in recent years. Agreements may have to be altered and public documents re-written.

KII HUB
A major change within the Ucits regime has been the introduction of the KIID, which requires Ucits funds to explain their objectives and risks in plain language. GFR created Kii Hub to meet this challenge.

“Managers and lawyers need to understand that they cannot use their normal language, with all its inherent jargon, legalistic and technical terms, to explain what a fund does,” says Neason. “It is simply not allowed under the KIID regulations.”

Kii Hub uses the expertise of GFR’s parent companies, Technical Fund Marketing and data experts FE, to produce KIIDs, from drafting the text in plain language to producing and maintaining the document and then distributing it to regulators and any websites required by the fund groups. GFR also arranges full translation of the KIID if the fund is distributed in other countries.

“We work with fund groups to take as much or as little of the burden off them as they want, or we can do everything for them and they only need to sign off our work,” Neason explains.

Europe’s Alternative Investment Fund Management Directive is doing for hedge funds and other non-traditional strategies what the Ucits directives have done for traditional bond and equity funds: bringing them into a regulatory, cross-border, regime.

And as alternative managers eventually require multiple registrations for their AIFMD-scoped funds, GFR is able to scale its business to provide the same service to this new sector.