In the last few years smart indexing has grown in popularity with fund managers. Barney Hatt looks at what the concept means, what providers are doing with it and what use investors can make of it.

Smart indexing, or smart beta, is a set of strategies growing in popularity which can be seen as sitting halfway between traditional passive fund management and active.

Perhaps the most readily understood and popular smart index is an equity index based on company fundamentals rather than market capitalisation. This is where the alternative indexation concept has achieved the greatest traction.

Within the first category, fund managers have designed strategies that shift investment systematically into alternative risk premia such as small-cap stocks, value stocks or stocks with strong price momentum. It is a generalisation, but fundamental indexing strategies are often variations on the value theme.

Within the second category, some strategies focus on ranking stocks by their correlation to the market, others on ranking them by volatility and so on. These are sometimes known as low-volatility strategies or minimum-variance. They might be expected to perform more consistently through cycles, outperforming in bear markets but lagging during rallies.

Manooj Mistry, db X-trackers head of ETF product development, points out it is not easy to come up with a single, correct definition of smart beta.

“If, for example, you create an index and decide to exclude a certain type of stock or number of stocks, does that make it smart beta or is it enhanced? It is a bit unclear, which means arriving at an accurate definition is difficult,” he says.

Most of Deutsche Bank’s products are market cap weighted, although, Mistry says, it has utilised smart techniques in alternatives.

“We have a suite of commodity indices, for example, which are optimised where the aim is to minimise the impact of contango on the rolling of the futures contracts,” he says.

ALPHA GENERATION
Contango is where a forward or futures contract price is higher than the spot price at maturity.

“Some people would consider this a smart beta because you are taking the standard benchmark index and then overlaying a strategy on top to make it perform better.”

According to Deborah Fuhr, partner and co-founder of ETFGI, a data provider, many investors have been drawn to smart indexing methodologies to see if they can identify ways to generate alpha relative to market cap indices.

She adds: “The challenge is when you think about most investors - whether that is an asset owner such as a pension fund, sovereign wealth fund, endowment/foundation or an asset manager – many have existing benchmarks which are market cap weighted.

“So it is often difficult for them to embrace other benchmarks, because when they are giving mandates or using tools they typically want to know whether it is going to track the benchmark they are using and measured against.”

“Both of those strategies are based on very simple approaches,” he says. “This is so we can very clearly articulate to people what the index is that we are tracking. It includes what the underlying drivers are in the rules of that index, and why an investor would be interested in an alternative to traditional index products.”

GUESS RIGHT
Nick Blake, head of retail at ETF provider Vanguard, says there are problems with the concept of smart beta if investors assume this refers to an outcome rather than the requirement needed to achieve it.“Those that propose smart beta are normally suggesting the capture of beta from a market that is less than the whole market cap weighted, that is, a sub asset class,” he says. “Therefore, this assumes they can predict which element of the whole markets will outperform the whole market. Hence the need to be smart to guess right.”

Vanguard does not advocate smart beta, because, Blake says, “we don’t believe we are smarter than the market and when it comes to our products we don’t try to be”.

“We believe investors are best served by having an asset allocation of equities and bonds that best meets their ability to take risks and achieve their goals, and then using indexing to capture those cap weighted market returns at low cost,” he adds.

Fuhr points out retail investors in particular are looking for absolute return but index providers will often charge higher costs for smart beta.

“Often there are higher trading costs in these strategies and therefore there is a higher hurdle of performance to overcome for them to be able to deliver alpha,” she says.

XHEAD HERE
He adds: “There is a danger that, like active management, investors are being charged a premium on the pretext of extra value being added and it remains to be seen whether this extra value will materialise or not. “

Fuhr says it has been a hard struggle to persuade investors to move away from the market weighted cap strategies they are comfortable with. She points out that a couple of years ago 27 ETFs in the US and Europe were closed because they were unable to gain enough assets.

“Given the difficult market environment which we find ourselves in, where many firms are rationalising where they are going to spend resources, we do find the appetite for new strategies on a longer term basis is shorter than it has been historically," Fuhr says. 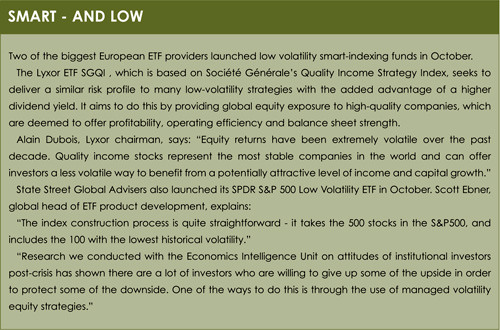 “We have seen recently in the US, for example, both Russell Investments and FocusShares have closed ETFs which would be on non-standard benchmarks. FocusShares closed their entire offering, and Russell have only kept one product which is more of an asset allocation offering.”

Alain Dubois, chairman of Lyxor Asset Management, says the traditional indices will continue to be the benchmarks.

“Even when people invest in these new indices they will compare their performance to the usual benchmark,” he says.

“It will not be a substitute to the classical market cap indices in terms of evaluating their performance. The classical benchmarks represent the full set of opportunities in their investment universe, and will stay the benchmarks.”