It is important to understand the difference between smart beta and factor indexing in order to obtain the right mix of betas to control risks, Francois Millet, of Lyxor, says.

Smart beta is increasingly viewed as the third pillar of investment management, sitting between active and passive strategies. François Millet, product line manager for ETF and indexing at Lyxor Asset Management, sees smart beta as a permanent feature of the investment landscape.

“Smart beta is here to stay and it will continue to grow. It will continue to attract large institutions more and more. In the UK I believe that it is just starting, although there were some pioneers in 2010.”

But Millet is concerned that the definition of smart beta has become blurred by a new trend towards “risk factor indexing”.

There needs to be a clear distinction between the two approaches to index-tracking, Millet says.

BIG BUZZ
“What we are seeing now is a lot of confusion and a big buzz around factor indexing.

“We see people talking about the importance of different factors, we see a lot of package products combining several factors, and everybody is a bit lost. There is a need for understanding or clarifying the two facets of smart beta which are used interchangeably now,”
Millet says.

Lyxor, which manages US$111.6 billion (€83.4 billion) of assets worldwide, has developed research defining these different facets of smart beta investing.

To begin defining the difference, smart beta is driven by objectives, Millet says, while risk factor investment targets a single, individual type of risk that can be “completely inappropriate” in terms of the phase of the market cycle.

Millet goes on to say that smart beta indices are designed to stand alone in core, passive portfolios, and should deliver an improved risk-adjusted return that is stabilised over the market cycle. Smart beta indices are suited to a buy-and-hold strategy and help to achieve a specific portfolio profile, such as representing economic value, or maximising diversification.

In contrast, Millet concludes that risk factor indices should be used in an allocation portfolio, enabling investors to intentionally capture a given risk factor.

They are adapted to suit mid-term and short-term time frames, and should be used as building blocks in combination or rotation.

MIXING FACTORS
“Everybody is now pushing forward new products of packaged factors, where they are mixing and combining the factors, and rotating between them,” Millet says.

“The thing is, there are only very basic products in the market today and these are, for example, equal weighting, perhaps in weight or risk. Nobody has a real clue of how to allocate between factors effectively.” 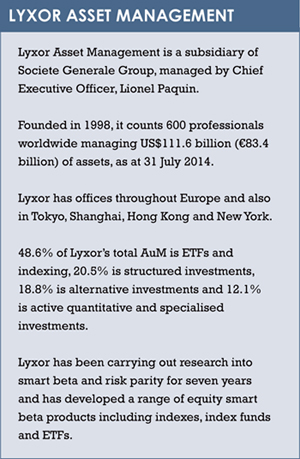 It can be difficult to balance the different factors and build an allocation based only on expected returns, and Millet says that some prominent academic research has suggested certain risk factors are failing to offer true rewards, or only work effectively in a limited universe.

The Lyxor SG Value Beta ETF was released in July this year. It selects the 200 cheapest stocks in the world, based on a traditional index of 2000 developed world stocks. In other words, the 10% highest “value” quantile.

Millet says: “The problem is that if you want to use these new generations of products for factor allocation, no equity portfolio is just exposed to a single factor; the factors are not independent.

“Our product is a value index and value ETF with a very strong value content, which is particularly suited for the risk factor allocations.

“The investor will buy stocks that are very cheap, but that also sometimes involves investing in companies that need to fix their problems while they are still there.”

“That’s the bold approach of value; we believe that this is a very good way to bet on the value risk premium by using a single ETF,” he adds.

Lyxor’s value beta ETF is listed on the Euronext Paris exchange and the London Stock Exchange.

Lyxor says the product is particularly successful when it is combined with its quality income ETF, which was launched in 2012 and has raised $500 million in Europe.

Millet says that investors must acknowledge that different strategies will in fact show very different behaviours.

He references the bull market between 2000 and 2008, when value portfolios were outperforming and quality portfolios were actually underperforming; results which were then inverted in 2008 when the market reversed.

“You may believe that the value approach and the quality approach are responding similarly in the same market pattern and this is not the case.

“What we are proposing to clients is that a good approach to fundamental investing through passive products is to combine the value and quality premiums in the right way and with the right instruments, and to swap and do rotations between the two.”