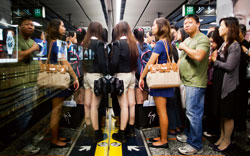 The initial enthusiasm around the programme that links the stock exchanges of Shanghai and Hong Kong has faded and trading volumes have dropped, partly because Ucits funds are not eligible to trade under it. Stefanie Eschenbacher reports.

Even the chief executive officer of the Hong Kong Exchanges and Clearing admitted that he was “a bit disappointed” when trading volumes on the recently launched Shanghai-Hong Kong Stock Connect dropped.

The programme that links the Hong Kong and Shanghai stock exchanges finally launched mid-November, and opens up a new channel for foreigners to trade Chinese A-shares.

The Stock Connect programme is another step towards financial liberalisation, and will make trading Chinese A-shares easier for Hong Kong and international investors. Ucits funds, however, are not able to participate.

The Stock Connect programme launched with what Shanghai-based consultancy Z-Ben Advisors described as a “bang”, but interest has been muted since.

David Stevenson, the head of business development at Barings, says one thing that has held the Stock Connect programme back is its exclusion of Ucits funds.

The Ucits base is primarily driven by three cross-border fund domiciles in Europe – the UK, Luxembourg and Dublin – and Stevenson says none of the regulators and custodians in these markets have been able to agree that trading through Stock Connect is permissible because there are concerns around beneficial ownership of the underlying shares.

Stevenson recalls that back in 2011 there were similar concerns with the renminbi-qualified foreign institutional investor (RQFII) programme, which allows eligible investors to raise offshore renminbi and invest under their own quota.

Stevenson says it took regulators across Europe about nine months to find a solution for those concerns.

“We are looking at similar issues with the three key locations,” Stevenson says, adding that the regulators and custodians as well as the individual industry forums are all working hard with the Hong Kong Investment Funds Association on a resolution.

“There is a big demand… and a large asset base that at the moment is precluded from participating,” Stevenson says. “If that block is removed, we will see flows, certainly on the northbound, increase substantially.”

The quota for northbound trading, through which Hong Kong and international investors can buy and hold shares listed on the Shanghai stock exchange, is set at 300 billion renminbi (€39.2 billion).

Whereas the quota for southbound trading, through which investors in China can buy and hold shares listed on the Hong Kong stock exchange, is set at 250 billon renminbi.

On the first day of trading, the 13 billion-renminbi cap that was applied to northbound trading of Chinese A-shares in Hong Kong was reached less than five hours after markets opened. More than a billion purchases were completed in the first five-and-a-half minutes of trading.

Southbound volume, in comparison, was much more muted from the start, with only 500 million renminbi worth of Hong Kong shares being bought through the programme on the first day.

Charles Li, chief executive of the Hong Kong Exchanges and Clearing, concedes that anticipating the flow of funds across the boundary was tricky.

“We all shared the collective enthusiasm prior to launch, so when we see the volume drop, we are obviously a bit disappointed,” Li says. “In all of this punditry and early obsession with the numbers, we should not lose sight of what the scheme represents.”

Late clarification on taxes or challenges with pre-trade checking could explain the drop, but Li says many participants are still going through their internal boarding processes, while others might be waiting to finish the central pre-checking on delivery.

Jean Devambez, head of solutions for asset and fund services at BNP Paribas Securities Services, says another concern for asset managers is the fact they need to transfer their shares one day prior to the trade date when they want to sell them. “They bear a risk and depo bank may have an issue as well,” he adds.

Meanwhile, Barings is planning a Hong Kong-domiciled fund range for the first quarter of next year that will not only allow the team to participate in the Shanghai-Hong Kong Stock Connect but also to offer investors renminbi-denominated share classes and funds.

“Local funds will give us greater flexibility in the scheme,” he says. “We also see more attention given to mutual fund recognition.” 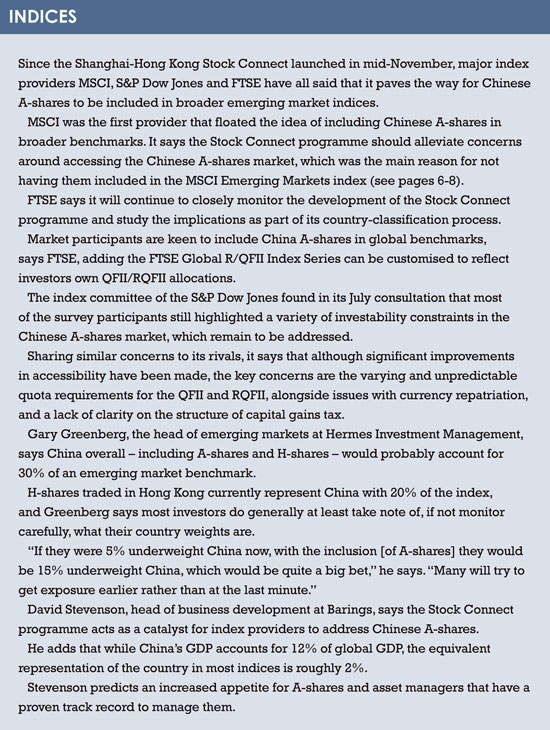 Gary Greenberg, the head of emerging markets at Hermes Investment Management, was among the first to trade on the first day, buying shares of Daqin Railway and Anhui Conch Cement Company.

“We just wanted to see how it would work, and it has worked,” he says.

Greenberg says the Stock Connect programme is only going to get marginally used, adding that many large- and medium-sized asset managers already participate through participatory notes.

Such P-notes are issued to foreign investors and mirror the performance of underlying stocks, but Greenberg says they are expensive when they are bought and sold.

But Greenberg adds there was no particular reason for him to sell the P-notes he owns for, say, Daqin Railway, to buy the same stocks through the Stock Connect programme.

“A lot of the bigger investors also either have received already or are in the process of getting RQFII, so they will be able to buy and sell directly in the market cheaply as well,” Greenberg says. “There have been alternative routes.”

Devambez also highlights the importance of existing programmes that allow eligible international investors to invest in Chinese A-shares, such as the RQFII and qualified-foreign institutional investor (QFII) programmes.

These have been gradually expanded into the rest of Asia, Europe and the Middle East. Devambez says investors will be most concerned about the fact that under the Stock Connect programme there is a global quota, as opposed to an individual quota under RQFII and QFII.

“You are under the risk that one day or the other the global quota is reached and you are not able to do the transaction you intended,” Devambez says of the Stock Connect programme. “Definitely for asset managers this is a concern.”