Exposure to blockchain is difficult to gain through stock markets, but the ETF world has responded to the challenge. Nick Fitzpatrick reports.

In his foreword to the book Cryptoassets: The Innovative Investor’s Guide to Bitcoin and Beyond, portfolio manager Brian Kelly talks about his Damascene conversion to the potential of blockchain. “I have come to understand that bitcoin – and the blockchain beneath it – is a technological advancement that has the potential to revolutionise financial services the same way email did to the post office,” writes Kelly, who went on to launch a digital assets fund.

This is similar to what Bin Ren, another blockchain investor and chief executive of Elwood Asset Management, has said in publicity material for a blockchain exchange-traded fund (ETF) that Elwood launched this year with asset manager Invesco.

“The pace of innovation in the blockchain ecosystem is similar to the early days of the internet, as evidenced by the levels of start-up activity, corporate R&D spending and the attraction of top talent,” he said.

Blockchain is best imagined as a distributed database that is near instantly consolidated across its multiple locations when one user updates the information. Cryptography makes it highly secure.

As a technology, it is disruptive in that there is no need for intermediaries, such as banks in currency transactions, although businesses such as banks are making use of it – and supposedly cutting costs as a result – in ‘private’ blockchains.

As an investment opportunity, blockchain sounds like a second go at dotcom. It’s an enticing thought. Although there could be as many casualties along the way as there were with dotcom, there could also be another Amazon. Yet investing directly in blockchain is difficult. Most companies in the area are at the start-up stage and privately funded. Blockchain specialist companies that are listed are few and far between in Europe. The US and Canada have the lion’s share.

But to make the most of the opportunity, in March this year Invesco and Elwood launched the Invesco Elwood Global Blockchain Ucits ETF. The ETF is physically replicated and had $20.7 million (€18.7 million) of assets under management by August 29. It tracks the Elwood Blockchain Global Equity Index, which has 47 stocks in it.

It appears to be the second blockchain exchange-traded fund launched in Europe; the first was the First Trust Indxx Innovative Transaction and Process Ucits ETF announced in April 2018. This is also physically replicated and both ETFs have fees of 0.65%.

Global equity correlation
Given the lack of blockchain-specific companies that are listed, the two ETFs attempt to gain exposure to blockchain partly by investing in companies that might benefit from using blockchain in their business processes. This approach means the ETFs have a number of large-cap companies in sectors such as financial services and mining. Rio Tinto, Facebook and Amazon are all in the Invesco Elwood ETF.

Ren acknowledges that because the index consists of global equities, it makes the Invesco Elwood ETF “reasonably correlated” to global equity markets.

So, how confident can investors be that blockchain evolution will materially impact the share prices of large or mega-cap firms, such as Rio Tinto?

Therefore, although we are firm believers in the continued development of blockchain technology and its future application across multiple sectors, we are not in a position to guide investors on what impact blockchain may have on the future share price of an individual company.”

Elwood has a dedicated team of analysts working on the index looking for blockchain technology names, with an emphasis on earnings and the significance of blockchain to the business.

The index, administrated by Solactive, attempts to diversify away from generic large-cap US tech companies. Despite their exposure to blockchain technology, Elwood’s belief is that investors are unlikely to gain significant alpha from these companies. Roughly, the index’s sector split is 46% tech, 20% financials. Other sectors include communication services, consumer and utilities.

The index offers investors exposure to bitcoin mining companies, which are described as a leveraged play on crypto prices. Other companies in the index use private blockchains to improve operational efficiencies and launch new products, which it’s hoped will result in earnings surprises.

The index’s correlation with global equities explains the weak performance towards the end of 2018. Last year, the index was down 20%.

Performance was stronger this year. In the three months to around June 30, the Elwood blockchain index outperformed the MSCI World index by a moderate 3%. Ren said this was driven primarily by strong performance from the cyclical semiconductor names in the cryptocurrency mining area and some consumer and internet stocks working in blockchain payment systems.

The Indxx Blockchain Index, which underpins the First Trust Ucits ETF, returned 19.94% in the first seven months of the year. According to the fund’s factsheet, it has 100 holdings.

The top performers
Solactive, which carries out the index administration for the Invesco Elwood ETF, says the index was back-tested to July 31, 2017 and from its initial composition, Square Inc and Advanced Micro Devices have been the top-performing stocks, based in US dollars and as of July this year. 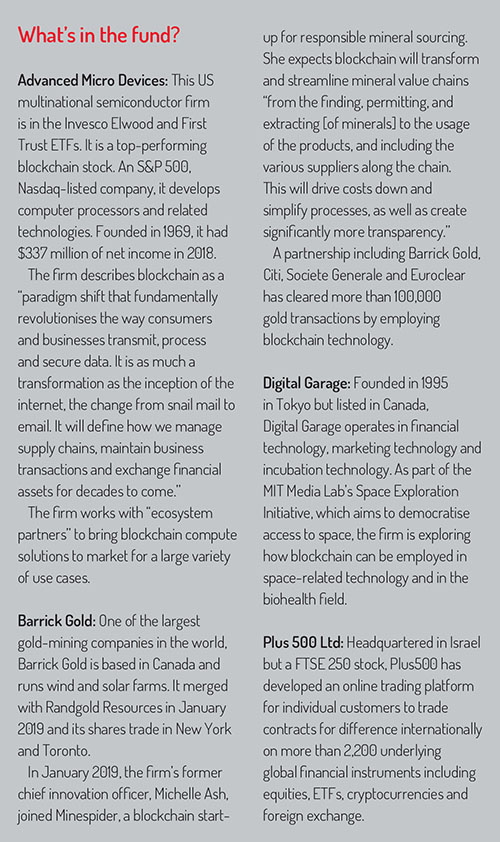 CME Group Inc is the best-performing stock from the pool of stocks where a significant proportion of corporate value is comprised of profitable and sustainable blockchain-related business activity, said Solactive.

In the publicity material surrounding the Invesco ETF, Ren says that financial institutions are among the earliest blockchain adopters. HSBC has used blockchain for at least $250 billion of foreign exchange trades carried out in one year. According to Ren, the bank has said that blockchain enabled HSBC to “dramatically reduce” human interaction, reducing FX transaction costs by 25%.

Digital coins issued by JP Morgan will allow customers to make instant payments to other bank customers over blockchain with benefits such as reduced counterparty and settlement risks, and Walmart can trace a head of lettuce from farm to table using the technology.

Interesting… in the longer run
As the two blockchain ETFs show, blockchain is predicted to impact many industries, reaching well beyond its initial usage as a technology for cryptocurrencies.

Vincent Vinatier, a fintech equities portfolio manager in Axa Investment Managers’ Framlington Equities business, last year gave a presentation about how giant financial services firms were collaborating with fintech firms, including in the area of blockchain. “The underlying technology could be interesting… in the longer run,” one of Vinatier’s slides said in relation to blockchain.

Vinatier, whose background as a fund manager is in the financials sector, tells Funds Europe that his portfolio has “a very small exposure” to blockchain through two companies that are running blockchain programmes. This exposure is “mainly so we can follow this industry trend”, he said, but declined to name the companies.

Other tech themes – such as mobile payments, contactless debit cards and challenger banks – feature more prominently in the portfolio, he says. But he also notes that 2018 marked a very strong year for fintech. Quoting an M&G figure, global investment through private equity, venture capital and M&A in fintech more than doubled to $120 billion, including several IPOs. He says such investments should create further opportunities in public markets.

As an asset manager, Pictet Asset Management is upbeat about blockchain. Digital is one of its thematic active equities strategies, brought to market through its Pictet-Digital fund. Blockchain’s potential goes “far beyond” volatile cryptocurrencies, the firm says, and extends to streamlining traditional banking transactions, facilitating new kinds of e-commerce marketplaces and eliminating the need for paper passports.

Blockchain buffer
Crypto assets and associated blockchain are commonly thought to be in an investment bubble at present. The authors of the book in which Brian Kelly likens blockchain to email make a strong case for exposure to crypto within a wider portfolio, but others are more sceptical.

In his book How to Own the World, Andrew Craig mentions an argument used by blockchain bears, which is that there is not enough capacity in the internet yet to use blockchain at scale. However, even Craig – who suggests the smallest of speculative exposures to crypto, if any – considers this not the fairest of criticisms, given scaling solutions for bitcoin such as Lightning Network.

Back at Elwood, Ren suggests the blockchain ETF offers a buffer, unlike many dotcom funds of old. This is down to the large-cap stocks within it.

In the “unlikely circumstance”, he says, that blockchain has no impact on the companies in the index, investors will still have exposure to a diversified portfolio of companies that has been outperforming the MSCI World index recently. fe

Cryptoassets: The Innovative Investor’s Guide to Bitcoin and Beyond, by Chris Burniske and Jack Tatar, is published by McGraw-Hill.