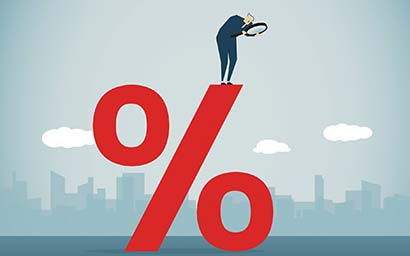 The Federal Reserve and the Bank of England raised interest rates by 0.25% over the summer and the end of economic stimulus now seems to be in train. Fiona Rintoul reports.

Rising interest rates spell bond market volatility. So with the Federal Reserve (Fed) and Bank of England both hiking, are global bond fund managers happy to wave goodbye to the ultra-loose monetary policy that has characterised the past decade, or do they long for the weird calm of quantitative easing (QE)?

The bad part about the end of QE is that it may spell the end a ten-year bull run on the bond markets.

“For the end customer, it’s been fantastic,” says Reinout Schapers, director emerging and global credit at Robeco. “Whether you were invested in peripheral credit, Europe credit, US credit or emerging credit, every part of the market has performed really well since the global financial crisis on the back of stimulation.”

The good part is that it takes us back to a world that is driven by market forces, not political forces. Even if there are choppy waters ahead, at least portfolio managers won’t have to second guess what central bankers and finance ministers are going to do next.

“The largest positive from QE coming to an end is that it’s going to reduce the market distortions we’ve had over the past few years – and perhaps the market complacency,” says Mohammed Kazmi, fixed income portfolio manager at UBP.

Problems remain, though. First, QE may be unwinding but it looks like it’s going to be a long, slow goodbye. Interest rates remain negative in Japan and the eurozone. The Bank of Japan is still buying Japanese government bonds, and the European Central Bank is a long way off abandoning its policy of full reinvestment, notes Adrian Hilton, head of global rates and currency at Columbia Threadneedle Investments.

“While the ECB’s policy has undoubtedly reduced the term premium in European government bonds, the bank now owns such a large share of some markets that its holdings remain the dominant factor, even when net purchases cease,” says Hilton.

Second, a lot of the reasons behind the end of QE have been “technical rather than fundamental”, suggests Kazmi. In the US, QE isn’t ending because of inflation, which is the central banks’ main mandate, but because of growth. In the eurozone, the ECB is ending its fresh purchase programme at least partly because it’s starting to hit its restraints in terms of what it can buy.

“Without inflation, we’re not really going to be moving towards a significantly tighter monetary policy regime,” says Kazmi.

Furthermore, some believe the downward pressure on global yields could be structural in nature and will continue without the assistance of QE.

“Disinflationary forces and demographic trends persist,” says Hilton. “Despite the efforts of the US tax reform, there is scant evidence so far that investment levels in developed economies can rise enough to deliver the kind of productivity gains that would justify a significantly higher structure of interest rates.”

“Concerns about an escalation of trade talks into a full-scale trade war are the dominant theme regarding fixed income, preventing rates on core govvies from reaching new yearly highs and increasing market divergences,” says Eric Brard, head of fixed income at Amundi.

But it’s a normalisation of sorts.

“It removes that artificial accommodation that we’ve had in the market for several years,” says Mark Cernicky, senior product specialist, fixed income at Principal Global Investors. “We think that’s important to get a more balanced risk/reward within the fixed income market. We’re also looking forward to a flattening yield curve outside the US, which we think will benefit investors.”

And it’s a normalisation that plays into the hands of active managers. Differentiation between sectors, markets and countries has come back into the market, says Schapers, and you can no longer do well simply by being long on risk, as you could over the past few years.

“If a company makes a poor decision, it is now being penalised by the market by higher yields,” says Schapers. “If you’ve done your bottom-up research, there’s a lot of value to be taken from owning the right companies.”

Similarly, there are now opportunities to step back in when the market reprices a company after it has made a poor acquisition or committed another business error.

“In the last three moves, some of these moves have been quite violent,” says Schapers. “If you’re a stock-picker, you can find some very nice opportunities offering attractive yields.”

Costly forecasts
Looking out for these kinds of opportunities is perhaps particularly important right now, because the future is so hard to predict.

“The range of plausible outcomes - political, economic and market – is so wide, that acting on a forecast that proves to be wrong can be very costly,” says David Lloyd, head of institutional fixed income portfolio management at M&G Investments. “A better approach, one filled with opportunity, is to await bouts of volatility/market repricing and to act on any value signals that these episodes generate.”

Making the right calls in terms of which companies to avoid is equally important at the moment, suggests Schapers. In Europe, during QE, Italian corporates and financials were trading at almost identical yields and spreads to northern European corporates and financials, which “didn’t make much sense”. Now the market is recognising that an Italian bank isn’t as healthy as a French, Dutch or German bank.

“That is being priced in,” says Schapers.

So, how are fixed income fund managers positioning their portfolios within this changed, stock-picker’s market where it’s hard to make political and economic calls?

As short-term yields are still relatively low worldwide, it’s a challenge to find yield without taking on duration risk. As a result, some managers are focusing more on a margin of safety. In investment grade credit, the margin of safety might be looking for companies with hard assets, says Cernicky. In the high yield sector, it might be companies that don’t have significant financing risk.

“When you start looking to build your portfolio, you’re pulling back on reaching for yield and willing to give up a little bit if you can pull a bit more margin of safety into your portfolio,” says Cernicky. “Within that, we’re looking for strategies that do well in rising rate environments.”

Meanwhile, increasing volatility and markets that are driven more by flows and less by fundamentals mean that fund managers need to be more nimble. For UBP, this means reducing the size of positions slightly. The company has also moved a lot of the credit risk that it would traditionally have held in cash bonds into credit default swaps, increasing exposure to credit derivatives in its absolute return funds from 20% to 50%, says Kazmi. One of the reasons is that during a sell-off on the cash bond market, it is easier to liquidate credit derivatives at a good price than cash bonds.

“They allow you to provide your view a lot more easily if you’re a macro top-down investor,” says Kazmi.

In terms of country and sector selection, caution is the watchword, especially since political turbulence at the end of June rekindled fears in the bond market. That led to non-core eurozone sovereign yields rising as German and US yields subsided, while emerging market yields continued to head upwards.

“Those conditions led us to go further with the risk reduction process we initiated early in the year by paring back our exposure to non-core eurozone and emerging market debt,” says Didier Saint-Georges, managing director and member of the investment committee at Carmignac Gestion.

Emerging market debt, sometimes seen as a cure-all during the low-yield QE years, has come under pressure thanks to rising rates and a strong dollar. But the sector is broad and many fund managers still see opportunities in certain parts of it, particularly as some emerging economies are cutting rates while others are hiking them.

“There really are some pockets,” says Cernicky. “People think all EM move in the same way, but they don’t. Some are net importers of goods, some are exporters. Some benefit from a stronger dollar, some from a weaker dollar. You can be in Poland, for example, which trades a lot more like more traditional European high yield.”

As the beginning of the end of QE gets underway, the opportunities are there in the increasingly differentiated global bond markets, but no one is underestimating the risks at this stage in the cycle.

“For us now, it’s about being neutral or just below market in terms of risk-taking and make your money from getting the right bonds in your portfolio,” says Schapers.