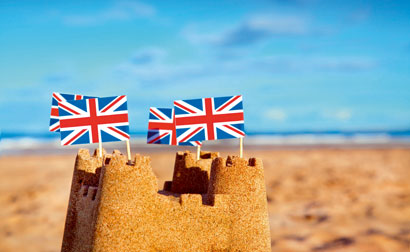 When Britain voted to secede from the European Union on June 23, investors in UK property funds also ran for the exit. The deluge of withdrawals was so rapid and voluminous that many firms, including Aberdeen Asset Management and Aviva Investors, were forced to suspend trading to stem flows.

While institutions are legendarily less prone to jitters and short-termism than their retail counterparts, Brexit still provoked panic in certain quarters. A week after the referendum, Danish pension scheme ATP, the fourth-largest in Europe with assets of 750 billion Danish krone (€100 billion), announced it had jettisoned all its UK holdings, including sizeable property exposures. “Until there’s more certainty, our appetite for UK exposure has dramatically decreased,” says Carsten Stendevad, its chief executive.

Stendevad’s sentiments aren’t exceptional. In July, research firm Preqin surveyed about 100 global institutions with exposure to UK property, finding 57% wouldn’t invest any further in the UK over the next 12 months following the referendum and 32% expected to invest less in the UK as a result.

The impact of this bearishness could be seismic. A great many European institutions have money tied up in UK property and infrastructure, directly and indirectly. Since the financial crisis, these investors have become enamoured with UK real estate; both commercial and residential property are in high demand, and a lack of restrictions on rent prices and rises provide for steady and ever-escalating yields. In a low-to-no growth environment, UK property is a rare commodity indeed.

There are strong suggestions that the prospect of Brexit has already caused some to reconsider the attractiveness of UK property. Data published by the Westminster Property Federation indicated deals worth around €1 billion fell through within a week of the referendum alone.

The largest to fall through was the scheduled purchase of a €535 million office building in the City of London by Germany’s Union Investment; the next-largest saw KanAm, another German institutional investor, cancel its acquisition of law firm Eversheds’ head office for €220 million.

In all, property agency Cushman & Wakefield estimates around 40% of commercial property deals in progress at the time of the referendum have been put on hold, are subject to renegotiation or have collapsed outright.

UNDER DISRUPTION
The obvious question is whether this pullback will disrupt other areas of the market penetrated by European institutions. Recent years have seen them increasingly involved in the construction and management of UK real estate projects.

Could this trend be reversed? If the sentiments of the institutions involved are anything to go by, the answer is a resounding no. Neither APG nor PGGM was fazed by the referendum result; a PGGM spokesperson said it would be seeking to further develop its partnership with LGC in future.

“While we will monitor developments closely, there is no question of us moving away from the UK,” the scheme says. “Investments [in UK real estate] will continue to provide us with a stable cash flow, vital for paying out pensions in the long term.”

Menno Middeldorp, senior investment strategist at APG, says his scheme likewise hasn’t forsaken the UK: “While the referendum undoubtedly has the potential to change the UK, and Europe, it’s still too early to tell – and while the UK may not be part of the European Union in future, it remains part of the world. Save for an unexpected economic catastrophe, there’s nothing on the medium-term horizon we can’t sit through, or that will cause us to fundamentally reappraise the UK.”

Other European institutions with major infrastructure interests in the UK are similarly unperturbed. PensionDanmark, which invests in six renewable energy projects across the UK, has pushed ahead with the acquisition of a new biomass power plant in Kent since the referendum. “The June 23 vote initially made us feel more cautious about investing in new projects, but the elevation of Theresa May [to prime minister] has fully restored our confidence. The UK is now stable politically, government policy is largely unchanged, and the underlying investment case still stands,” says Torben Möger Pedersen, chief executive of the fund.

While this bullishness may seem at odds with the groundswell of redemptions and cancellations evidenced in the days and weeks following the vote, the very institutions that pulled out of planned property deals seemingly remain upbeat on the UK, too. A spokesperson for Union Investment says it still considers the country a “safe haven” market despite the Brexit “Black Swan”, and will continue to invest there – just not for the time being.

OPPORTUNITY KNOCKS
Moreover, some evidently see the post-referendum landscape as a buying opportunity; falling asset values combined with the weakening of the pound against every other major currency means that for foreign buyers, UK property has not been so affordable in decades. At the start of August, for example, US bank Wells Fargo splashed €350 million on a new European headquarters in London.

“Institutions in North America and Europe are currently in a position to acquire property in the UK at prices as much as 20% lower than they were on June 22 this year – this is a clear opening for securing a bargain,” says Fyodor Blumin, a consultant at real estate investment advisory N&P.

“Many big-ticket property buyers had an option written into their contracts to suspend or cancel their purchases if the referendum produced a ‘leave’ vote, and we’ve seen a lot of shrewdness around these clauses. Some have used them as leverage, saying they’ll walk away if they don’t get a discount. Other new buyers have stepped into abandoned deals with lower offers.”

Institutional investors are also pumping money into UK real estate via funds. A spokesperson for Henderson Global Investors, one of the firms forced to suspend trading due to retail investor redemptions, says institutions moved €1.2 billion into its property fund range in the month following June 23.

Still, while rumours of the end of European institutional investment in the UK are evidently greatly exaggerated, it would be inaccurate to assume it’s business as usual. The referendum may not have caused an economic crisis (at least, not yet), but major structural changes of some kind are all but inevitable. One issue that should give investors pause is the prospect of the UK having its passporting rights truncated, or rescinded outright.

“Firms need to be based in the EU to have the right to sell their services and products across the region. With question marks hanging over the degree of unobstructed access the UK will enjoy, the case for firms to base their headquarters in London or the UK is diminished,” says David Hutchings, an investment strategy head at Cushman & Wakefield.

There are already indications that businesses in many sectors are looking to relocate, or at least shift away from the UK, pending the outcome of withdrawal negotiations. This has obvious and severe ramifications for the UK’s commercial property markets, and raises the prospect that even buying at current exchange rates may not end up being a bargain.

Nonetheless, UK property losing its lustre is far from a done deal, and departure from the EU may be a decade away at least. Moving forward, the only thing institutions can be certain of is uncertainty, which they’ve been dealing with ever since 2008. It’s just a pity there’s one less asset in the world they can have absolute confidence in.