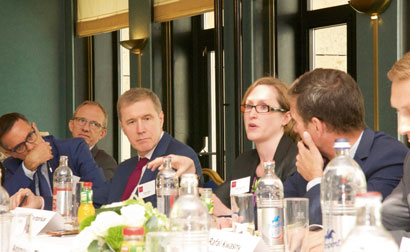 The potential impact of MiFID II on product governance led to lively discussions at the Euroclear/Funds Europe roundtable, with one likely challenge in particular concentrating participants’ minds.

Fund professionals who work at the sharp end of regulation will almost certainly see MiFID II as the greatest near-term shock to business continuity.

MiFID II – or the second Markets in Financial Instruments Directive – has a wide remit, affecting different types of financial firms across numerous activities with the aim of greater investor protection.

For investment management firms that offer funds, there is a particular pinch-point to be found relating to the way funds are sold.

It isn’t the well-known commission element of fund distribution (though that forms
a large and complex area in itself). Rather, the issue is to do with the ‘product governance’ aspects of MiFID II.

Product governance makes fund manufacturers responsible for ensuring funds are suitable for the customer, even if the fund is sold by an external distributor.

The spectrum of activity needed to manage the product governance area of MiFID II is ample. It stretches back as far as initial product design and reaches right into the future by calling attention to a fund’s ongoing sales activity. In other words, the task of ensuring product suitability may never stop.

Product governance will cause regulatory and operational challenges for both fund management firms and their distribution partners, so it was hardly surprising this topic formed a key discussion point in the Euroclear/Funds Europe roundtable.

At the centre of the product governance suitability test is the so-called ‘target market’, essentially a declaration by fund managers about which type of person a fund is suitable for. Firms then also have to ensure the fund remains appropriate for the stated target market throughout the product’s lifecycle, keeping in mind how tweaking an investment strategy or restructuring a fund might change that.

Various challenges that target market presents include: how fund manufacturers can ensure that distributors are faithfully selling a fund to the specified type of investor; what action to take if they are not; whether a mis-selling (and reputational) risk arises; to what extent target market applies when a fund is sold on an execution-only basis; and how to concisely describe the different target markets in the first place.

A PLACE TO BE
Logic might suggest that fund prospectuses would be the major medium of communicating target market to distributors – yet Sheenagh Gordon-Hart, of The Directors’ Office, cast doubt on whether prospectuses traditionally make enough impact on the average distribution agent’s mind to be meaningful. She argued a more explicit contractual arrangement might be necessary.

“Firms might need to have a contractual arrangement to make sure distributors take note of what the target market is,” said Gordon-Hart, adding that she anticipated heightened mis-selling risk from the target market aspect of MiFID II.

Using the Key Information Document – a document required by the Packaged Retail and Insurance-based Investment Products Regulation – may be the most appropriate answer to the question of where manufacturers should publish their target market definitions. PRIIPs, as it’s known, proposes that key product details are published in these documents – similar to Key Investor Information Documents under UCITS rules.

PRIIPs is not yet in force so there exists the chance of harmonising regulations and making a definitive ruling on target market communication – at least in terms of where to place that communication, if not how to word it.

Two other issues concerning target market are, firstly, whether the target market requirement would be applied retrospectively to funds – which one participant described as “outrageous, if it were” – and, secondly, what to do if the definition of a fund’s target market changes.

A panel participant likened a change of definition to a corporate action – such as a merger – within a fund and strongly argued against post-launch tweaks of this kind.

“From a distributor’s perspective, corporate actions in funds are the most dreadful events. Distributors resent them. Fund managers would be ill-advised to change a target market definition once established.

“My recommendation would be to keep [the target market definition] for life. If you change it every six months, your fund is going to be off the shelf in less time than it takes me to explain it.”

Yet it was said that even the introduction of additional share classes to a fund – such as a front-end loaded share class added to a fund with an existing retrocession-free share class – demonstrates that target market is “potentially evolving every day” and changes may be unavoidable.

Whatever the method of communication, managing target market requirements will be “incredibly complicated” due to multiple business models and the manifold relationships between fund manufacturers and distributors, said another participant in the Euroclear panel.

The panel was not against the ultimate ambition of MiFID II to increase investor protection. But there was broad agreement that there remains a need to address many issues relating to how target market information is disseminated.

A panellist said there is a need for agreements on standardisation of terms and definitions, data gathering, and the correct communications channels for the industry to move forward.

A complication exists right from the start, because the methods of calculating fund prices differ between MiFID II and PRIIPs, which also requires more cost transparency of investment products.

There is also day-to-day operational complexity to do specifically with gathering transaction costs, which funds will be required to do to demonstrate their efficiencies and value.

They might do this by comparing market prices achieved for trades with the mid-market price of the security.

But Baldock explained that it would be very difficult for a fund to measure this in situations where the fund is working to fill a large order over the course of a day: there would be multiple fills to build the position.

“Dealing desks are trying to achieve the best possible price for a transaction but not necessarily capturing all the reporting obligations around it. Calculating transaction costs is a huge step, as is then making the data available.”

With a live date for MiFID II of January 2018, the panel heard that the industry should still act to try and influence the outcome of the final text.