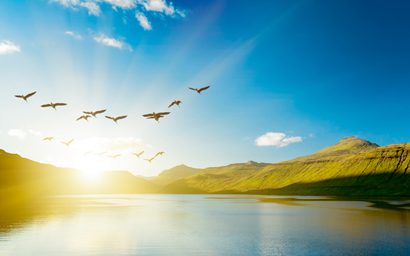 European asset managers have become more active participants in securities lending as they look to eke out returns in a low interest rate environment. They are also more accepting about non-cash collateral, finds Lynn Strongin Dodds.

As with many parts of the financial services universe, the world of securities lending is being reshaped by regulation. Stricter rules on bank capital and liquidity as well as the advent of central clearing of derivatives are forcing banks to reconfigure their business models.

Stubbornly low interest rates in Europe are also playing a part in coercing asset managers to revamp their investment remits. The result is not only a shift in the dynamics between participants, but also the types of collateral changing hands.

Looking at the big picture, figures from Datalend show there has been a gradual increase in worldwide securities lending activity in 2015 (see box, page 30).

Global agent lender to broker-dealer on-loan balances rose steadily from $1.66 trillion in early January, to about $1.74 trillion by late November. The average is about $1.69 trillion for the year.

The revenue picture differs depending on the region. Activity in Europe has been sluggish, with revenues dropping to $2.61 billion (€2.38 billion) in 2015 year-to-date at November 23, versus $3.23 billion last year.

Fees were also lower at 32 basis points, although utilisation (the proportion of available bonds on loans) was higher at 13%. The UK and Switzerland bucked the downward trend but France, Spain, Portugal, Germany and Greece struggled due to weaker economic growth and activity.

The US remains the largest market in terms of size with an average of $949.73 billion worth of assets on loan. Average borrowing fees were around 38 basis points, while overall utilisation stood at 12.8%. Revenues jumped 8%, from $3.11 billion last year to $3.39 billion year-to-date, partly on the back of buoyant merger and acquisition volumes, which reached a record $2 trillion, as of late November.

RANGE OF OPTIONS
Despite its girth and maturity, the US has not been as progressive as Europe when it comes to expanding its collateral horizons. Cash is still the king of collateral, but European lenders study a wider range of options.

One of the biggest trends is the shift to non-cash collateral, says Gerard Denham, clearing business development executive at Eurex Clearing. “There has been a lot of talk in the market about this move but this is the year when it actually has materialised, particularly in Europe. 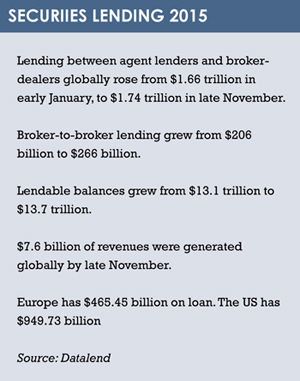 “There is a wider acceptance for asset managers to take equities as collateral in exchange for bonds. This is not as much the case in the US because funds are more conservative in their securities lending programmes, as many are constrained by regulations or their own guidelines.”

This trend is underscored by the International Securities Lending Association (ISLA). In the first half of the year, the proportion of loans collateralised with non-cash collateral increased to 60% of all transactions, up from 55% six months earlier. Fixed income government bond lending continued to record much higher levels of non-cash collateral with, for example, 90% of all European government bond loans being collateralised with other securities

There are several forces at play. On the one hand, banks in the wake of the financial crisis have come under much greater regulatory pressure to strengthen their balance sheets. Basel III’s liquidity coverage ratio (LCR) in particular obliges them to hold enough high-quality liquid assets (HQLAs), which can, if needed, be converted easily into cash to survive a 30-day stress scenario. This has meant that they are trying to borrow bonds such as German bunds, US treasuries and UK gilts or blue chip stocks from asset managers while offloading their less liquid securities as collateral.

“The other development we are seeing is that the LCR is one of the key drivers of banks wanting to access HQLA on a term basis” says Andrew Dyson, chief operating officer of ISLA.

MUCH MORE ACTIVE
Asset managers have also become much more active participants as they look to eke out any returns they can as interest rates in Europe, unlike those in the US, are likely to stay at rock-bottom levels. They are willing to lend out more of their assets for a longer period of time because the fees they receive in exchange boosts performance, although investors have greater exposure to the risk of a counterparties default.

BlackRock, the world’s biggest asset manager, recently made the news when it abandoned its 50% limit on the proportion of its European-based fund assets that could be lent out.

The increase in asset managers’ supply is helping to offset the squeeze felt by the ongoing European Central Bank’s monthly binge-buying of €60 billion worth of European bonds. The downside, though, is that certain trades – such as the ‘upgrade trade’ (borrowing government securities against equity collateral) – are becoming more expensive.

“We are starting to see fees and interest for general collateral rise from about 20-25 basis points to around 30-40,” says James Day, regional head of securities finance at BNY Mellon. “I think the upward trend is here to stay in light of the scarcity of bonds and increasing demand.”

CENTRAL COUNTERPARTY CLEARING
Against this backdrop, market participants such as BNY Mellon and State Street are exploring more cost-effective options for both borrowers and lenders. In 2015, both custodians joined forces with Eurex Clearing, the subsidiary of Deutsche Börse Group, to provide their clients with access to Eurex Clearing’s Securities Lending CCP, the only CCP – central counterparty – in this arena in Europe.

Launched in 2012, the service enables beneficial owners to have direct access via its ‘specific lender license’, which allows for greater buy-side participation by offering tiered membership and increased liquidity. In addition, it enables firms to be more analytical and strategic when deciding where to lend and borrow securities, and allows funds to widen the pool of borrowers with which to conduct business, according to Denham.

“Securities lending is still very much a relationship business and we see ourselves offering a complementary service in risk management and capital efficiencies,” says Denham.

“We also offer the ability to broaden the range of collateral that is accepted to include not only government, corporate and supranational bonds but also equities and exchange-traded funds. This has become increasingly important as the market in Europe moves from cash to a non-cash collateral world.”

To date, volumes have been small and most of the transactions have been with cash, but Denham expects this to change next year, particularly in wake of more agent lenders joining the platform.

In early December, the clearing and settlement arm of Deutsche Börse Group, along with Eurex Repo and Eurex Clearing, combined their agency lending capabilities to enhance their overall securities lending programme.

Under the new arrangement, transactions between the lenders and the borrowers will be managed by Clearstream, an international central securities depositary owned by Deutsche Börse, as the agent lender and tri-party collateral agent via the ‘Global Liquidity Hub’. Eurex Repo will provide the trading venue while Eurex Clearing will provide instant clearing as the central counterparty to both the lenders and the borrowers. The goal is to offer lenders an additional source of revenue by reaching out to different borrowers compared to its well-established principal model, called ASLplus.

“Although Isla is neutral, we believe that CCPs have become an important part of the ecosystem. The fact that Jonathan Lombardo (clearing sales and relations/business development at Eurex) has recently joined us as a board member is an indication of how important the topic is,” says Dyson. “However, buy-side firms not only need to get comfortable with using a CCP for securities lending, but also see it as an economic imperative in terms of better pricing and efficiencies.”

Finadium’s managing principal, Josh Galper, also believes that the CCP platform is capable of delivering an array of benefits, including a reduction in capital costs, as well as improved straight-through processing of lending transactions. “Given that the cost of borrowing and indemnification is rising, using a CCP is definitely an option for beneficial owners and borrowers to think about, because it transfers the risk from a bi-lateral transaction to the CCP,” he says.