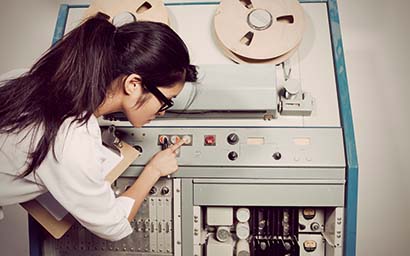 Technologies such as blockchain will be an integral part of securities lending in the years to come – but spending on regulatory reporting requirements is impeding development, finds Lynn Strongin Dodds.

Just like those in other industries, participants in the securities lending sector want to streamline costs, improve efficiencies and enhance the customer experience. The difference is that it has more manual processes than most and is facing big legislative hurdles in the shape of the Securities Transaction Finance Regulation and Central Securities Depositories Regulation, both of which are effective in 2020. Blockchain, artificial intelligence and robotics will be crucial, but it could take time before they make a significant impact.

As DataLend’s chief information officer, Ken DeGiglio, says: “When most technology investment by firms these days is directed toward these must-haves, emerging technology that may offer a competitive advantage oftentimes takes a back seat.

Technologies such as machine learning and blockchain are real and valid and exciting, and they have the potential to truly revolutionise the way we all operate, but in all likelihood, they will be more slowly adopted by securities finance market participants than some of the buzz would suggest.”

The challenges are not only on the structural and operational side, but also on the personnel front. Changing corporate culture is always underestimated, since the replacements of humans with machines is never an easy sell. However, not everyone agrees this will be the case. As with all parts of financial markets, securities lending market participants are asked to implement technology to complete and augment human activity, according to Dan Copin, head of securities finance at Caceis. “Some of this is straightforward: for example, connecting to better pre- and post-trade processing systems to improve settlement rates and reduce fails”

Other aspects are more complex, he notes, as banks work to move their artificial intelligence projects out of the innovation department and into business units.

However, the impending SFTR, which seemingly touches upon every aspect of the business – confirmation, reporting, reconciliations, connectivity, messaging, valuation and risk, trade capture and collateral management – is putting a light under firms to upgrade their systems and data management processes.

This has led to greater adoption of analytical platforms to drive price transparency and revenue opportunities, as well as so-called ‘smart bucketing’ and broker-defined borrowing criteria. These tools are deployed to increase optimisation for types of collateral, risk-weighted assets (RWA), liquidity and the net stable funding ratio (NSFR).

Sam Pierson, securities finance director at IHS Markit, also notes that there has “definitely been an increase in investments in integrating data stacks. They want to ensure that everyone can plug and play into systems both regionally and internationally and that information can be shared. The goal is to get rid of as many manual processes as possible and to automate the business.”

While many market participants are working toward alternate routes, which may include blockchain solutions, he says, technology spend seems to be pointing more towards operational efficiency and preparation for regulatory reporting requirements, such as SFTR.

The CSDR is also focusing minds on post-trade reconciliation because the new rules introduce penalties for failed trades. According to the International Securities Lending Association (Isla): “It is strongly encouraged that a robust trade-matching and post-trade contract-compare process is in place between parties in order to mitigate risk.” As a result, there will be a scramble for timely automated matching solutions as firms look to lower risk in advance of the settlement regime.

Many fails
Participants will certainly have their work cut out for them if a survey published by Isla looking at pre-matching and loan settlements is anything to go by. Canvassing several of its members, Isla revealed that 10% to 20% of securities lending transactions fail, with most of those being on the return leg of a transaction. If this is multiplied out using the more conservative 10% figure, it translates into 100,000 breaks per day, per unmatched field.

It is no wonder that against this backdrop, automation has become the mantra, not only for compliance purposes but also to grow and develop businesses. “It is not just the buzzword, but is the only way the business can grow,” says one player. “Market participants have been forced to squeeze cost out of the system and as a result, trading desks have gotten smaller.

“They cannot hire new people and so they have to automate processes, improve data quality and improve execution with tools such as data mining, which can identify trading patterns.”

Not surprisingly, the larger sell-side firms are ahead of the curve while buy-side firms are lagging behind. For example, even if the myriad of firms including insurance firms, Ucits managers, regulated alternative investment fund managers and pension funds delegate their SFTR reporting obligations, the proverbial buck still stops with them if they act as a principal (direct) lender. They will have to establish their own reporting solution, whether it be in-house or internally.

Vendors and custodians have wasted no time rolling out as well as incubating a variety of solutions and ideas. Take BNP Paribas’s trade-matching tool Smart Chaser, which aims to reduces fail costs and other operational roadblocks. Using smart data across multiple sources can help unearth optimal prices for securities loans, including supply and demand characteristics for each individual security. The tool not only boosts automation but can also help analyse historic data to identify patterns in trades that have previously required manual intervention. The product, which has a 98% prediction accuracy rate, will immediately alert clients about their live trading activities so action can be taken.

Northern Trust is also involved in proof of concepts in machine learning and artificial intelligence that offer data analytics to help clients price loans, as well as make better and more informed decisions, according to Mark Jones, the firm’s regional head of securities lending. “We are also using AI to make contracts more machine readable, to enhance the onboarding process and to identify as well as resolve any reconciliation breaks,” he adds. “Overall, it is about automation and reducing the risks and improving processes.”

In addition, participants are leveraging existing platforms that aim to make the life-cycle transaction process as seamless as possible. These include Equilend’s Post-Trade Suite – while at sister organisation DataLend, DeGiglio says the firm is actively working on cloud systems and implementing a shared ledger model that can be extended to leverage distributed ledger technology (DLT) and smart contract frameworks in the future.

Testing the waters
Equilend is not alone in its blockchain pursuits. Firms are at different stages, either hatching a blockchain idea, creating a proof of concept or testing the waters with a pilot. They all aspire, though, to lower costs, boost efficiency and execute transactions seamlessly. Also, as it securely records and stores all transactional data in an immutable and auditable manner, such a platform would also create the level of transparency that the SFTR demands.

The settlement of a securities lending trade typically involves the underlying securities being transferred between accounts in the process. This can potentially take days, which mean that the liquidity of those trades is postponed, making the process less efficient. Another firm, HQLA-X, has a collateral lending application that can swap the legal ownership of those securities instantly. This accelerates the process, as collateral is then immediately available.

ING and Credit Suisse have given the industry a glimpse of the future in carrying out transactions with each other powered by fintech R3’s Corda blockchain technology.

According to Hervé Francois, blockchain initiative lead at ING wholesale banking, who was involved in the live transaction with Credit Suisse, the technology enhances the effectiveness and the cost efficiency of the securities lending space. DLT also enables near real-time transactions, reducing time as well as cost via an inevitable disintermediation. The record of digital collateral records is maintained on the Corda distributed ledger, which is immutable and can be used as a golden record, reducing risk and preventing fraud. All the swaps initiated involve smart contracts, which reduces human error and improves predictability and efficiency.

Francois believes that the technology will “have the most impact on liquidity and capital improvement. Overall, it also reduces counterparty risk such as mitigating fire sales in case of default, simplify operation chain such as rethinking the flow processes and regulatory reporting.”