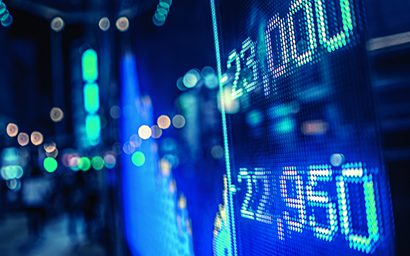 Hedge fund activity picked up this year in line with investor sentiment (see pages 10-11). Emerging markets were popular with investors – but in Europe, so-called ‘activist’ hedge funds were out in short-selling force.

Here we describe some of the main examples of ‘shorting’, as indicated by short interest data from IHS Markit (see table). The data, for the year-to-date at September 30, gives the percentage of a company’s outstanding shares on loan, which is seen as an indicator of hedge fund short-selling activity.

Premier Oil plc
Significantly exposed to energy prices, Premier Oil was the company that short sellers expressed the most interest in during the period from January to September, the IHS Markit data shows.

Yet it had the last laugh in July, when its announcement of an oil find in the Gulf of Mexico caused the stock price to rebound 30%.

Asset sales to pay down debt were among other measures that had commentators calling Premier Oil a “turnaround” stock in 2017. These included the Esmond Transportation System pipeline in the North Sea for £23.6 million (€26.8 million).

The company has oil and gas interests in the North Sea, Southeast Asia, the Falkland Islands and Latin America.

Carillion
The second-most rated company for short-selling interest was this British facilities management and construction company. Carillion is one of the contractors working on the HS2 London to Birmingham rail line.

In November, it issued its third profit warning in five months. It has debts of £1.6 billion.

A previous profit warning in July came just a day after a quarter of its shares were shorted. Its dividend was suspended and chief executive Richard Howson stepped down as the company announced a strategic review.

Vallourec SA
The decline of oil and gas prices in 2015 caused revenues to fall at this Paris-headquartered company that provides tubular solutions to the energy sector and wider industry. In its half-year report in June 2016, it reported a 30% fall in consolidated revenues.

Its shares ranked third on the IHS Markit list of short interest.

However, business has picked up over 2017. Chairman Philippe Crouzet said improvements had been seen in each of the three quarters (as at September 30), but that market prices were still challenging.

Fingerprint Cards AB
In the first quarter of the year, the biometrics company Fingerprint Cards, based in Gothenburg, Sweden, was predicting a 50% decline in revenues. It also withdrew from proposing a 2016 dividend.

The company develops biometric systems comprising sensors, algorithms, software and packaging technologies. Its product range is largely made up of fingerprint sensors and its customers are mainly smartphone and tablet manufacturers.

As the use of biometric solutions increases, Fingerprint is working to broaden its offer by using different biometric techniques, or modalities, and to identify other market segments where the solutions can be used, such as smart cards, PCs, automotive and online devices.

Telit Communications plc
As far back as 2015, reports stated that hedge fund Ennismore was targeting this tech company, which is listed on London’s AIM market for smaller firms.

In August 2017, the company fired its chief executive, Oozi Cats, amid claims that he had lied about his identity and was on the run from US police in connection with an alleged property scam in the 1990s.

By November, the share price had dropped 42% in the course of the year and the UK’s financial regulator was making enquiries about Cats.

The London telecoms company is an enabler of machine-to-machine communications, providing cellular, short-range and positioning modules via its brand Telit Wireless Solutions.

Seadrill ltd
Hit by the decline in oil and gas prices, Seadrill filed for bankruptcy in September after reaching a deal with lenders to pump $1 billion into its depleted business. The offshore drilling company, owned by shipping billionaire John Fredriksen, provides services to the oil and gas industry.

Talktalk Telecom Group plc
In May, Talktalk decided to cut its dividend as revenues fell by 3% to £1.8 billion, missing its expected target. These problems followed the departure in February of Dido Harding as chief executive officer. Tristia Harrison, formerly a managing director with the company, succeeded her. 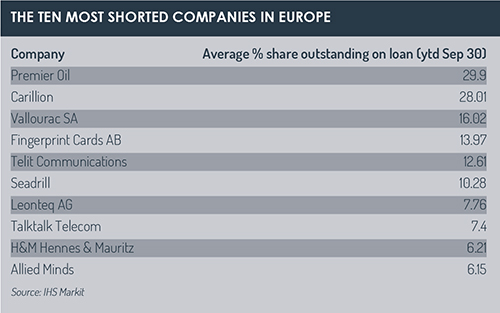 The London-based company provides television, telecommunications, internet access and mobile network services to consumers and small and medium-sized businesses in the UK. In its own words, it aims to be “the UK’s leading value-for-money connectivity provider”.

Executive chairman Sir Charles Dunstone said his focus was “growth, cash generation and profit – in that order”. He told investors: “We will be smart about how we invest, focusing on our fixed network and avoiding capital-intensive distractions.”

The Swedish firm’s chief executive, Karl-Johan Persson, said by way of explanation that the competitive landscape was being redrawn. New players were entering the market and there had been a change in customer behaviour and expectations, with sales increasingly happening online.

H&M’s growing online sales did not “fully compensate for reduced footfall to stores in several of our established markets”, said Persson. This meant the company’s total sales development did not reach its targets by the end of Q3.

“This is of course something that we are not satisfied with,” added Persson. One result was that the business entered the third quarter with inventory levels that were too high.

Persson said the company was investing in the Omnichannel model while integrating and developing its online and physical shops, among other initiatives.

Allied Minds
Allied Minds, which commercialises intellectual property and invests in technology and healthcare, continued to receive pressure from short sellers this year. It was the tenth-most shorted company, as indicated by the average percentage of its outstanding shares on loan.

Shares had fallen 65% during the year by April because of fears about the value of its portfolio. In April, the firm itself had ended seven of its investments, according to reports.

The pressure on the firm started in 2015, when hedge fund Kerrisdale Capital said its share price should fall by at least 70%.

One of the UK’s best-known fund managers, Neil Woodford, is an investor in the company and continues to defend it from its detractors.