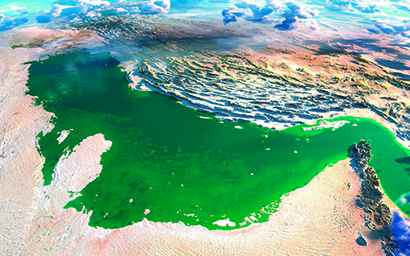 As Catherine Lafferty reports, it looks like 2017 will go down as a positive year for hedge fund asset gathering and returns.

With sunshine growth one moment and showers of losses the next, markets mimic the vicissitudes of the weather. Luckily, this year has been a scorching one for hedge funds.

Fund flows have been in positive territory in the 12 months to the end of the third quarter (Q3).

The abundant heat of these market conditions is rendered even more sizzling in comparison with the previous year, which saw outflows of $70 billion (€59 billion) and was the worst period since 2009. As a result of the recovery, total assets under management boomed to $3.15 trillion by the end of the third quarter.

Mohammad Hassan, head analyst at Eurekahedge, agrees. He says that overall investor sentiment has improved, with a recovery theme playing strongly in the US.

What caused the hedge fund market’s Indian summer was a number of auspicious market conditions coming together. North American mandates took the lead in terms of net flows, and the performance of underlying equity long-biased hedge fund strategies moved firmly into the green with double-digit gains of 15.22%.

As the political climate improved, European mandated funds also contributed to the resurgence, with investor flows into hedge funds of 22%.

Asian mandates lead the pack in terms of performance and a weak dollar further added to the appeal of emerging market assets, while relatively cheaper valuations also contributed to strong inflows into Asian mandates.

Small-to-mid-sized hedge fund players also continued to attract investor attention, as some of the larger ones’ returns were disappointing once their fees were taken into account.

Heinz cites Chris Hohn’s Children’s Investment Fund as one of the standout hedge funds of the year. He also singles out Third Point for its large position in Nestlé, which has garnered much attention, especially in Europe. For Hassan, the year’s most notable hedge funds have been equity long-based and crypto-focused funds.

Emerging markets
The strongest performance areas of the year to the end of Q3 were emerging market-focused funds, Heinz says. Hedge fund capital invested in these markets soared to a record, largely thanks to the industry-leading performance of Chinese hedge funds. 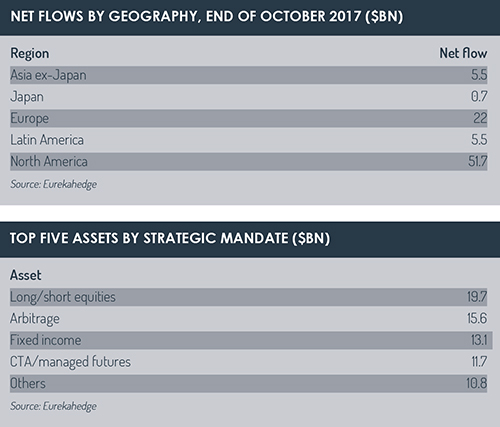 It was the best performance since 2013 – possibly better, depending on how the next two months go.

The standout strategy for Heinz was the equity hedge category. US and European equities showed strong gains and the healthcare and technology sectors were robust performers.

Sometimes, however, there were scattered showers of disappointment. Heinz says the weakest category of the year was macro hedge funds, specifically commodity trading advisor (CTA) funds. CTAs – which use futures contracts to achieve their investment objectives – also posted small declines in the calendar years 2015 and 2016.

But these are tiny blemishes on the overall picture. What is more, the forecast is for continuing balmy conditions in the hedge fund world.

Hassan points out that globally, the major central banks still offer substantial support for markets. If the current optimism continues, he says, expect equity-focused strategies to post high single-digit gains on the back of tax cuts in the US, which will further lend support to already frothy markets.

If a correction takes place in the markets, though, expect CTA/managed futures, macro, volatility-focused strategies to deliver outsized gains.

The near future appears to be a bright one. As Heinz says: “Overall trends are likely to continue because there is decent momentum in the industry.”