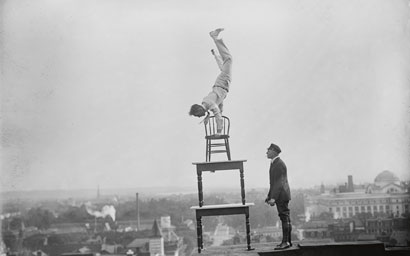 Since the Lehman Brothers default, regulators have been keen to ensure lenders are fully aware of the counterparty and liquidity risks associated with securities lending. David Stevenson asks if they’ve achieved that aim.

The volume of loan balances has dropped dramatically since 2009, falling from $3.9 trillion to around $1.9 trillion (€1.8 trillion) today. Regulation, while appearing to be the excuse du jour for many industry woes, has certainly had an impact on securities lending.

Before reforms such as Dodd-Frank in the US and Basel III in Europe, there was a greater supply of high-quality liquid assets (HQLAs). But since these initiatives came in with the aim of shoring up the system against a repeat of the 2008 financial crisis, agent lenders have had to drastically reduce their inventories of these collateral assets at a time when a flight to quality and safety has placed these assets in extremely high demand.

Luckily, there’s another source of HQLAs in the market: sovereign wealth funds. They have been investing heavily in HQLAs since the 1980s, especially G7 government bonds. According to James Day, managing director of BNY Mellon’s securities finance team for Europe, the Middle East and Africa, the big sovereigns have been in the market since the onset of securities lending.

“Their raison d’être is asset protection. [Securities lending is] an ancillary revenue stream for them, they’re really looking to make sure of the safety of their assets,” says Day.

To ensure the safety of assets, the most important regulations facing broker dealers are Basel III’s liquidity coverage ratio (LCR) and net stable funding ratio (NSFR) and, for US banks, the supplementary leverage ratio.

According to the International Securities Lending Association (Isla), the demand to borrow HQLAs has grown steadily as banks seek to source high-quality collateral as part of a broader agenda to comply with LCR requirements and to reduce the impact of balance sheet and capital charges for equity securities. Isla has also noted the increasing use of equity securities as collateral and the continued growth of ‘term transactions’, especially in respect of government bonds or HQLA transactions.

Here is where sovereign wealth funds have stepped in and provided the market with much-needed liquidity. They are willing to lend out their HQLAs for various types of collateral, including lower collateral such as equities. BNY’s Day says that this can entail “wrong-way risk” as a beneficial owner will be receiving lower collateral, meaning it requires rigorous checks to mitigate risks.

Isla says that while sovereign wealth funds comprise only 7% of lendable securities, they continue to report a disproportionately high 13% of all securities on-loan. This is in part due to the growing regulation impacting retail investors and Ucits funds in particular.

REGULATORS, FRIEND OR FOE?
Tom Poppey, senior vice president at Brown Brothers Harriman, points to the heavy focus in the EU on the Securities Finance Transaction Regulation (SFTR), which requires enhanced shareholder disclosures to Ucits investors by next year. It will also require regulatory reporting to central trade repositories by Q1 or Q2 of 2018. “This is a very significant undertaking for the industry,” says Poppey.

There’s a danger that investment firms might start suffering from regulation fatigue and withdraw from securities lending, especially Ucits funds. This year, Isla responded to the European Securities and Markets Association’s (Esma) call for asset segregation.

The issue with asset segregation is that if a borrower is required to accept numerous deliveries from individual segregated accounts, this would lead to additional settlement risk as well as additional transaction costs, making it likely that the borrower would seek to source the asset elsewhere. As mentioned, other sources of desirable assets include sovereign wealth funds, where a single delivery can be made.

The trade body also said that a number of regulations, such as the Alternative Investment Fund Managers Directive and Ucits V, have impacted alternative investment funds and Ucits’ ability to maximise returns in recent years, and have restricted their ability to utilise term transactions, re-use collateral received or utilise central counterparties (CCPs). 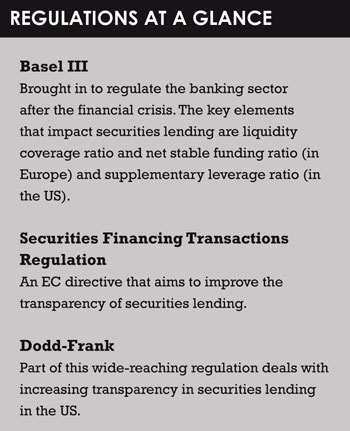 However, Poppey sees value in the EU’s push for greater transparency, believing that it can help dispel misconceptions and concerns that have prevented investors from participating. He believes that it can also help regulators better understand the securities lending business and identify trends: “This is important, given the extent that the broader capital markets rely on the liquidity provided by the secure funding markets, as evidenced by the Lehman Brothers failure.”

The concern of using securities lending was also felt by the International Monetary Fund (IMF), which warned in July 2015 that pension funds could create systemic risks to the US financial system if they were to chase returns by engaging in securities lending. “More needs to be done in the area of securities lending and cash collateral reinvestment to ensure that risks are properly appreciated and managed,” the IMF said at the time.

The key will be striking the right balance between too much and too little information given to investors and regulators. But in a low-yielding environment, a major cause of concern is how regulation impacts the ability of funds to maximise returns.

ADDED VALUE
While the financial crisis has understandably prompted regulators to tighten rules regarding riskier strategies, including structured finance and securities lending, growing fee pressures mean funds must look where they can to boost returns.

As Poppey notes, passive funds and exchange-traded funds have benefited from the extra basis points provided by securities lending, often putting it at the heart of their business models.

While BNY’s Day says that sovereign wealth funds’ use of securities lending is for capital protection, these funds can also add returns. He says that a number of factors have to be taken into account on the underlying assets themselves and on the collateral accepted against these loans and the duration, returns could be between 25 and 40 basis points.

It seems that in a volatile market, dominated by geopolitical events such as Brexit, the Italian referendum and Donald Trump’s victory in the US election, adding any extra returns to a fund should be welcome.

But given market volatility, it’s understandable that regulators are being cautious with securities lending. One of the fallouts from over-regulation is that it may drive trades out to CCPs and peer-to-peer models. In a CCP, all the collateral is held within it – although this may appeal to agent lenders, since they will not have to spend as much on indemnification as they are indemnifying against the default of the CCP rather than a borrower.

Whereas Ucits funds have certain limitations on the type of collateral they can accept – for instance, a fixed income Ucits can accept only fixed income collateral – there are signs that the market is improving this year. Regulation and the drive to make these transactions more transparent may well prove to be a major benefit to the securities lending market.