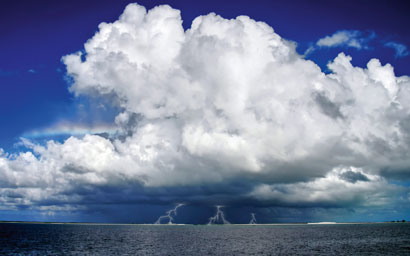 Funds might wish to lend securities to cope with low returns, but regulations are not conducive, reports Lynn Strongin Dodds.

Memories of securities lending going disastrously wrong for participants caught up in the Lehman Brothers collapse, as well as broader concerns over short selling, still linger over the funds industry and reverberate in regulations. But predictions for the end of securities lending are probably premature as the prolonged low interest rate climate is pushing investors to look more and more at any strategy that can boost returns.

This is borne out by a recent survey of 30 North American and European asset managers conducted by Finadium. It found that none of the firms with securities lending programmes had ended them, and several non-lending managers were considering restarting. Overall, 89% were lending, up from 84% last year, while 96% claimed they would be following suit over the next two years.

“We have definitely seen a mixture of new entrants coming into the marketplace as a means of generating alpha, as well as other clients who pulled out post-crisis coming back in,” says James Day, regional business executive for securities finance at BNY Mellon. “It is a combination of the low interest rate environment [and] regulations that require collaterisation of exposures and margin segregation. Counterparties are looking at using securities lending as one of the tools to generate liquidity from their funds and to generate the required collateral.”

“For example, if you are a long-term holder of gilts or sitting on shares such as Siemens, then you can boost your income by an incremental 0.25% or more and in this environment, anything and everything helps,” he adds.

Like Sleep, Matthew Chessum, an investment dealer at Aberdeen Asset Management in London, says incremental revenues generated in a risk-adjusted manner are an advantage of securities lending with a compounding effect of returns over ten to 15 years.

But another advantage he cites is data. “[Securities lending] also offers access to a whole world of market information and greater insight into what is happening with the stock,” he adds. “This gives you a different side of the market and enables you to build a proper picture of what is going on.”

While there is still a perception that short selling is one of the drivers for lending, Chessum notes that recent averages show this accounts for only 1% of all activity. Event-driven hedge fund strategies, for example, comprise 15%, while emerging market strategies comprise 10%, and market-neutral 6% of lending.

FALLING UCITS DEMAND
Mick Chadwick, head of securities finance at Aviva Investors, echoes this. “Since October 2008, there have been numerous studies showing that short selling has not had any impact on asset prices,” he says. “The type of activity in a lending programme depends upon the composition of the portfolio, the lenders’ risk appetite and regulatory environment. For example, Ucits funds are prohibited by regulation from entering into certain types of transaction such as ‘term lending’. Overall, for most funds you are not talking about transformational returns – only a handful of basis points per year.”

Three years ago, the European Securities and Markets Authority (Esma) restricted Ucits funds from engaging in fixed-term securities lending. Funds were allowed to enter into repo and reverse repo agreements only if they could recall the assets or cash at any time. As a result, demand from Ucits funds has dropped to historically low levels when compared with other institutional investors.

Chadwick, though, does believe that securities lending can “move the needle to a greater extent” in passive funds rather than actively managed funds.

“They [passives] are operating in a tighter margin environment in terms of both cost and relative performance, and are trying to maximise returns by all reasonable means,” he says. “Active managers can sometimes be more emotive as they may have a view on an individual stock and may be more concerned about lending it out for fear of it being shorted.”

“Index funds must therefore control costs and maximise their ability to track their benchmarks in order to provide best-in-class performance and superior long-term returns to investors,” he says.

Vanguard uses risk-controlled securities lending and believes this can help improve long-term performance and provide a “positive benefit to investors”.

WHO TAKES THE RISKS?
For now, securities lending in Europe is mainly the preserve of the institutional investor, accounting for over 80% – or around €10 trillion – of supply, according to figures from the International Securities Lending Association (Isla).  However, over time, as the market – particularly in the UK – moves to a defined contribution pensions model, securities lending could be deployed, although there would be challenges.

Henry Tapper, founder of workplace pensions adviser Pension PlayPen and director of First Actuarial, says: “There would need to be greater transparency in terms of who is taking the risk and getting the benefits of stock lending.

“Practices such as stock lending can see profits being diverted from the beneficial owners of a fund to the managers of the fund, depriving the owners of what should be theirs. At the moment, there is no body properly checking the vehicles we save into to make sure that charges aren’t hidden.” 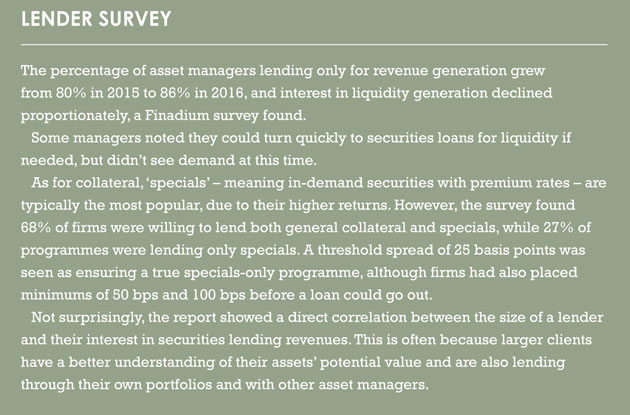 This could change. In October 2016, the Financial Conduct Authority (FCA) launched a consultation paper on transaction cost disclosure in workplace pensions with a focus on identifiable costs, including specific costs like securities lending. All responses were due to be in at the beginning of 2017 with results published in the second quarter.

However, looking ahead, greater regulation could hamper the progress in the institutional market. In its latest report, Isla has warned that existing and impending regulation such as the Securities Financing Transaction Regulation (SFTR), the Central Securities Depositories Regulation (CSDR) and further restrictions on Ucits may cause some lenders to withdraw from the market rather than comply.

For example, SFTR requires Ucits and alternative investment funds to disclose their use of securities financing transactions (SFTs) and total return swaps (TRS) to investors in firms offering documentation, as well as in regular ongoing reporting. In addition, all SFTS are to be reported to trade repositories authorised by Esma.

SFTR reporting will be dual-sided, meaning both counterparties to securities lending transaction must report. This has proved to be an operational burden, with a variety of problems including inaccuracies and inconsistencies between different counterparties’ reports.

Day notes that “the majority of participants are living with new regulations and the SFTR is part of that. I think participants will become more efficient in their post-trade handling of SFTs. For example, they could automate the comparison of open contracts between borrowers and lenders to help reduce the burden of regulation.” Counterparties are unlikely to pull out, he adds, because they will want to maintain the revenue stream.