The CAMRADATA panellists were then asked to explain further the nature of the liabilities which they are investing to cover. Amer said that in aggregate, MS Amlin manages to a duration of 3.5-4 years. “The asset-liability gap is in the process of being closed, especially in the U.S.,” he said. “We are now reviewing whether UK and European underweights should be changed.”

King said CTIM’s targeted liability duration is 3.5 years. “We have been barbelling around that, using very short-dated duration at one end. At the other end, a bright spot has been longer-duration private assets.

King noted that often contagion spread from public to private markets, but that has not been evident this year. “There have been significant swings but no trouble transacting,” he said. 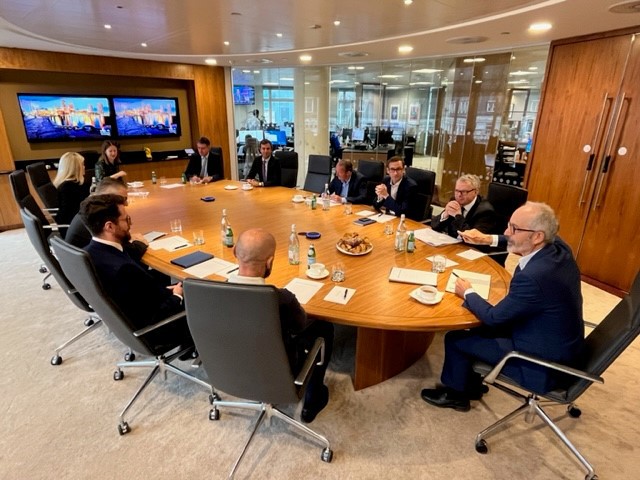 CTIM accesses renewables and energy assets in fund form, buying units rather than illiquid partnerships. King also clarified that private assets here meant debt, not equity. He gave the example of Commercial Real Estate (CRE), which has undergone all kinds of uncertainties since the introduction of lockdowns globally. “Through Covid-19, entire working practices have changed,” said King. “One thing CTIM picked up on was prime CRE. That has benefitted from Covid-19 and the return to work because to get employees back, companies have had to offer superior workspace.”

Amer said that MS Amlin obtained its real estate exposure via a fund of funds, which is up 16% this year and outperformed over both five and ten years. “We haven’t given them a benchmark, so they choose where they think the value is,” said Amer. “Four years ago, they reduced exposure to offices and increased more defensive areas such as assisted living residences.”

On infrastructure, Amer said MS Amlin used a specialist that had outperformed by 5-6%. Going forward, 70-80% of returns in these areas would be now coming from income rather than capital.

Amer described current conditions as an inflationary bear market. MS Amlin is now down to half its maximum volatility tolerance and considering paring back further. “For now, we are hunkering down,” he said. He expected the strains of rising rates to feed through into private equity over the next six to nine months, so next summer would be the earliest time to reconsider buying either public or private equity.

Wilgar was cautious on where private markets are today. He acknowledged that they have a place in investors’ portfolios but added that the illiquidity premium net of fees had recently looked more like an illiquidity discount. “Yields and spreads are low because of the weight of demand and capital chasing private markets but investors should be paid for locking up capital.”

He added that, generally, he struggled to stomach General Partners (GPs) retaining a share of origination fees. He said the private equity model was generous in that GPs were free to draw on capital when they wanted in the first years of a fund – without the associated cash drag for maintaining liquidity to do so affecting the returns attributed to them - and then terminate the vehicle years later if they wished to avoid crystalizing gains (or losses) in a less supportive market.

“Four years ago they reduced exposure to offices and increased more defensive areas such as assisted living residences.”

Keen said that although real assets weren’t his asset class, he was cautious: “There has to be some knock-on from bond markets and a nasty slowdown in Europe and possibly the U.S. If interest rates go up, asset values go down.”

“Waverton as a firm has downsized its office space post-Covid by 40%. What about all that other space out there? It can’t all undergo a change of use. We’ve had over ten years of extremely stimulative policy that has supported the property sector. I’d be cautious now on UK real estate in general.”

He noted that the Waverton Real Assets team had found value in specialist niches, including warehousing, student accommodation and supermarkets. In bonds, Keen recalled few bright spots this year. “We’ve used hedging on a small amount of the fund to protect against tail risk: we should have done more in hindsight. Selling anything has been a plus.”

For Jenkins likewise, bright spots had been few and far between. Being short duration and credit derisking were two he aired. Like many other bond managers, he admitted that Payden & Rygel had probably underestimated the persistence of inflation.