The Edhec-Risk Institute surveyed pension funds to see how regulation impacts asset/liability matching and the reasons for pension underfunding. Samuel Sender reports on the findings

At the end of 2009, as part of the Edhec/Axa Investment Managers (Axa IM) research chair on regulation and institutional investment, the Edhec-Risk Institute sent out a “call for reaction” to a study we had published earlier in the year called Impact of Regulations on the ALM of Pension Funds. The study focused on prudential and accounting regulations and how they should be embedded in the asset and liability matching (ALM) of pension funds.

The study focused particularly on the Netherlands, the United Kingdom, Switzerland and Germany.

We also published a study in the spring of last year that attempted to evaluate the reasons for current pension fund underfunding. That study was called The European Pension Fund Industry Again Beset by Deficits, and it was produced also as part of the Axa IM research chair.

The main conclusions of the latter study were that: 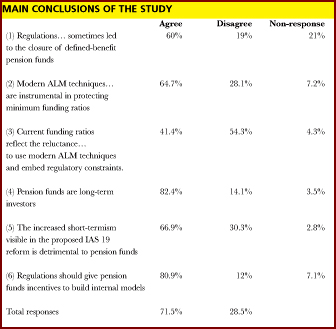 In general, we argue that regulations should give pension funds incentives to build internal models that are full risk management systems rather than risk measurement tools: risk management is always useful.

The call for reaction was meant to allow the respondent to express an opinion on these crucial themes. The questions were posed in a neutral manner to allow Edhec-Risk to analyse the use and perceived efficiency of ALM tools and concepts, rather than merely to explicate the degree to which practitioners agree with the conclusions of our research.

In the main conclusions of the study, the only point of disagreement seems to be that respondents do not, in general,
agree that current deficits reflect the reluctance of pension funds to adopt modern ALM techniques. Instead, they attribute these deficits to longevity (65.3% of the respondents think that longevity risk is the main risk faced by the pension system, a risk not addressed by modern ALM techniques).

By contrast, there is unexpectedly strong support for the notion that pension fund regulation should encourage the use of internal models – more than 80% agree with this view and more than 40% strongly.

Reactions
The responses to our call for reaction corroborate the arguments made in the Edhec study (Amenc et al 2009) on the impact of accounting and prudential regulations on the ALM of European pension funds.

In particular, respondents agree that pension funds should take a long-term approach to investing, but they also think that they should manage their short-term constraints; they agree that risk management protects minimum funding ratios better than high funding ratios do, and as such they believe strongly that regulations should encourage risk management – for instance, by allowing internal models.

Respondents also point out, as we do, that the funding ratio of the pension fund is not, on its own, a sufficient indicator of the degree of protection afforded pension benefits: the risk to the benefits depends on the combined risk of underfunding and sponsor default. Respondents argue that the use of modern ALM techniques cannot fully ensure that a pension fund is never underfunded, not only because funding depends on the contribution policy, but also because longevity risk has added significantly to liabilities.

As a consequence, a specific measurement of the combined risk of sponsor default and underfunding is required. Contributions must be raised or assets may be pledged by the sponsor when this combined risk arises.

Samuel Sender is an applied research manager at Edhec-Risk Institute