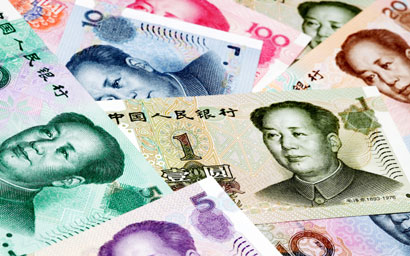 The renminbi has jumped into the top five of world payment currencies, overtaking both the Canadian dollar and the Australian dollar by its share of global payments.

In January 2013, the renminbi was ranked at number 13 with a share of only 0.63%, but by December 2014, the currency had reached a share of 2.17% in global payments by value, according to data from the Society for Worldwide Interbank Financial Telecommunication (Swift).

The renminbi now trails the Japanese yen, which has a share of 2.69%. The US dollar, the euro and the British pound are the top three payment currencies.

“The renminbi breaking into the top five world payments currencies is an important milestone,” says Wim Raymaekers, head of banking markets at Swift.

“It is a great testimony to the internationalisation of the renminbi and confirms its transition from an 'emerging' to a 'business as usual' payment currency.”

He adds that the establishment of various offshore renminbi clearing centres around the world, including eight new agreements signed with the People’s Bank of China in 2014, was an important factor in the currency’s growth.

Overall, global renminbi payments increased in value by 20.3% in December 2014, while the growth for payments across all currencies was 14.9%.

In 2014 renminbi payments doubled, compared to overall yearly growth for all currencies of 4.4%.