With the multi-year bond bubble bursting, what happens if you are a major fixed income house like M&G? Alix Robertson finds the firm has been able to partially capture outflows with multi-asset funds.

M&G Investments’  assets under management were £256.5 billion (€354.9 billion) at June 30, with over half in fixed income. The manager is a well-known bond investor for retail and institutional clients across Europe and Asia.

But with recent market ructions and impending fears over interest rate rises, its bonds funds – like those of many other managers –have been affected.

The 2015 half-year results of Prundential, the insurer that owns M&G, show the manager experienced net outflows of £2.4 billion compared to inflows of £4.2 billion at June 30, 2014.

This was driven by retail outflows of £3.4 billion, mainly reflecting redemptions from bond funds, which flows into multi-asset funds ultimately failed to offset.

Like the funds industry as a whole, flows into multi-asset funds is one of the dominant themes that M&G has seen recently.

Having experienced a surge into fixed income over the four or five years from 2009 as investors sought to replace a loss of income from bank deposits, the firm now sees that clients want other solutions for protecting themselves against greater market volatility.

Within fixed income, a major concern for investors is duration – that is, unease about future rises in interest rates. Many lack the risk profile to move directly into equities, and therefore multi-asset or multi-asset income is proving an attractive next stage.

Jonathan Willcocks, managing director, global head of retail sales at M&G, says: “We’ve seen a huge amount of growth, both from the UK and especially Europe in the last couple of years in multi-asset income products.

While multi-asset funds may be attracting more interest at M&G, some of the firm’s success stories in the fixed income space are suffering as a result of this change.

The renowned M&G Optimal Income Fund has had a particularly tough time, with outflows of €1.5 billion in July 2015 alone, according to Morningstar data. 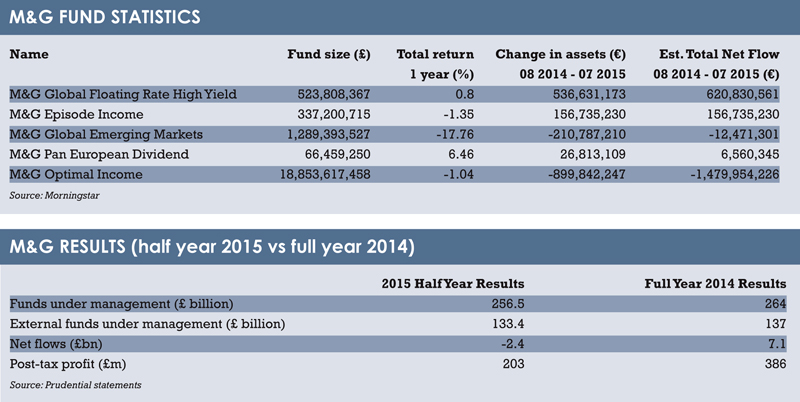 Willcocks says this is the result of investors looking to diversify away from the asset class.

He adds that Richard Woolnough, manager of the M&G Optimal Income fund, has options for turning the fund’s performance around, such as changing the allocation across the credit spectrum, altering duration or buying selectively back into equities, as the fund can invest up to 20% in the equity market.

“Institutional investors are now realigning their portfolios to pick up emerging market equities, having had the sell-off that you have seen over the last year or so,” he says.

Whether now is the time to enter into emerging market equities is hotly debated (see ‘Allocating in the midst of uncertainty’, page 12), but if an investor does not have any of these assets, now could be the time to buy them.

Willcocks adds that the firm is also starting to see some activity around its Pan-European Dividend fund.

“In Europe, where we haven’t had that exposure to US oil names, then certainly we’re seeing a lot more interest in the Pan-European fund and outperformance has been very strong.” (See box).

M&G'S ‘BEST IN CLASS’
One fund responding well as the bond bubble bursts is the M&G Global Floating Rate High Yield Fund, which the firm launched in September 2014.

The product aims to maximise total return while generating a high level of income. It invests mainly in floating rate notes (FRNs), which are bonds paying a variable coupon that is adjusted in line with changes in interest rates. This makes them attractive to duration avoiders worried about hikes in rates.

The fund uses the BoA ML Global Floating Rate High Yield (GBP Hedged) Index as a comparative index and focuses on FRNs issued by companies with a low credit rating, which typically pay higher levels of interest to compensate investors for the greater risk of default.

Part of the fund may also be invested in other fixed income assets, such as government bonds, while asset exposure is gained through both physical holdings and the use of derivatives.

Willcocks says investors looking for an alternative to poor returns from fixed income, plus hedged protection against rates going up, are interested in the fund as a way of accessing high yield but losing duration risk.

Fund manager James Tomlins describes the strategy as fairly new to both M&G and the European marketplace in general, adding: “It’s fair to say it’s been our most successful fund launch in the last ten years or so at M&G.”

Tomlins says that M&G is a first mover with this product, particularly in Europe, and while the firm acknowledges some similar strategies are out there, few are available for retail investors.

“The genesis of the product was that we were getting a lot of demand a couple of years ago from clients to look at a short duration strategy, a limited interest rate strategy,” he says.

“Short duration high yield has been very popular over the last few years.

He adds that the fund is a way to access an area of the market that gives investors a little more downside protection, particularly if more defaults were to happen
in the future.

A GOOD RECEPTION
The Global Floating Rate High Yield Fund has recently gone past its one-year anniversary and has just surpassed $800 million (about €716 million) in assets. “We’re certainly getting a good reception,” Tomlins says.

“The performance has been pretty solid, it’s done what it was supposed to have done.”

The fund returned a little over 1% after fees for the US dollar institutional share class. Tomlins is pleased with the result.

So for M&G at least, there is life after fixed income.