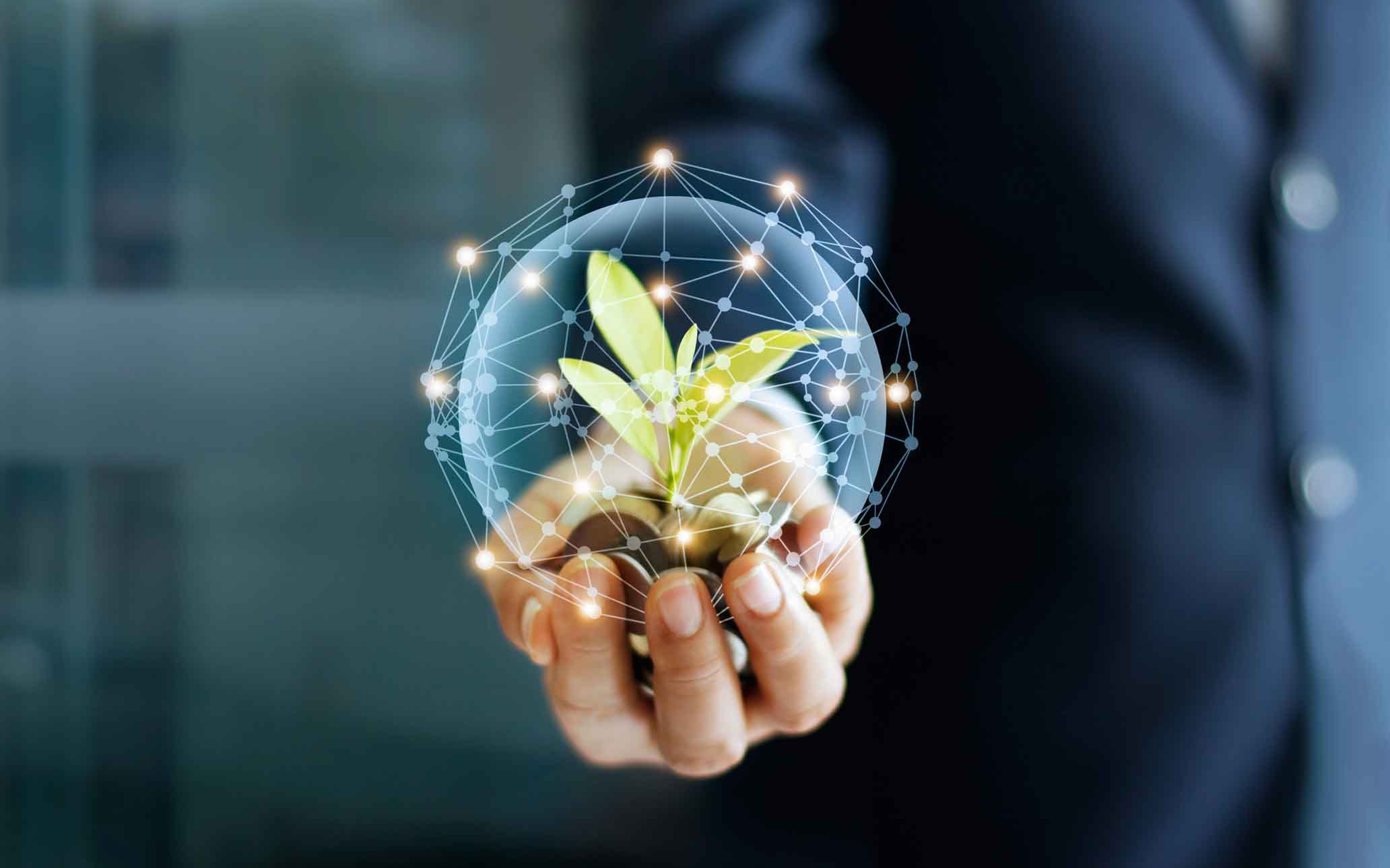 Diversity, inclusion and equality are the foundation stones of an environment where individual differences and the contributions of all participants are recognised and valued. In the workplace, these principles help to ensure each employee can apply their experience, knowledge and skills for the benefit of the organisation and its customers, staff and wider community. 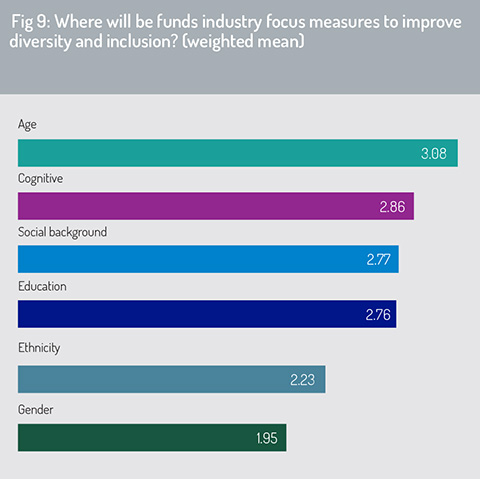 But how well does the funds industry embrace these principles? And where will efforts to promote diversity be focused?

On the second of these questions, respondents told us that measures to address age discrimination will be most prominent (fig 9).

Policies to improve cognitive diversity across the organisation were ranked by respondents in second place, representing steps to include employees with diverse perspectives and methods of problem-solving and processing information. Measures to address lack of opportunity linked to social background (2.77) or education background (2.76) featured in third and fourth positions respectively in the ranking order.

Alexandra Altinger, CEO of J O Hambro, noted recently that UK firms may pay a financial price for lack of boardroom diversity. She was commenting on the findings of a recent report by professional services group Company Matters, which concluded that women are outnumbered 16 to one in executive roles in AIM UK 50 companies.1

There is also a lack of racial diversity in UK boardrooms: only three out of 324 directorship positions in AIM UK 50 boards are held by directors who are black.2 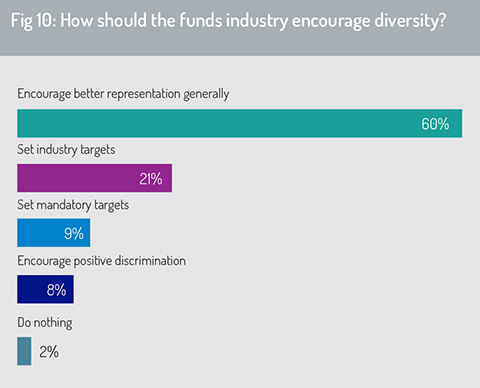 Looking at the steps that the industry may take to encourage diversity (fig 10), 30% of respondents to this Funds Europe survey agreed that the funds industry ought to set targets for improved representation, with 9% saying these targets should be mandatory.

In contrast, a majority of respondents said that this is best achieved through a balanced set of measures designed to encourage more balanced representation across the industry (60%).

In February 2021, the Investment Association (IA) in the UK announced that it plans to issue warnings to FTSE 350 companies that fail to deliver improvements in boardroom diversity. This will include ‘amber’ warnings issued to firms that fall short of required standards on ethnic and gender diversity and more severe ‘red’ warnings for firms that demonstrate deeper fundamental shortcomings in this area.3

This builds on the recommendations of the Parker Review, published in 2017, which mapped out targets for directors on company boards from ethnic minority backgrounds.

In the first Parker report, from 2017, the Review made a series of recommendations and set a target for all FTSE 100 boards to have at least one director from an ethnic minority background by 2021 – ‘One by 2021’. 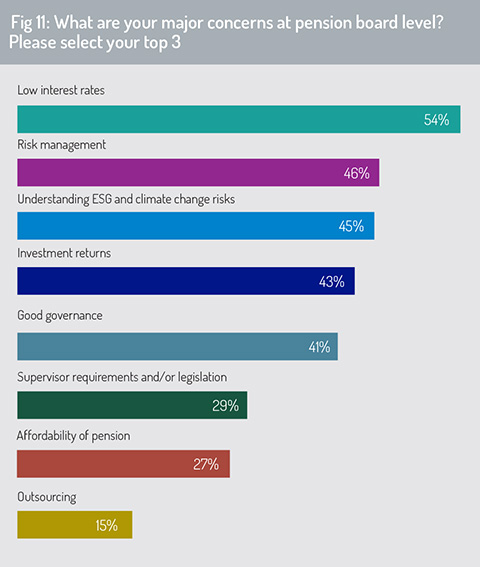 Andrew Ninian, the IA’s director for stewardship and corporate governance, observed that the UK’s boardrooms need to reflect the diversity of modern-day Britain. “With three-quarters of FTSE 100 companies failing to report the ethnic make-up of their boards in last year’s AGM season, investors are now calling on companies to take decisive action to meet the Parker Review targets,” he says. “Those who fail to do so this year will find themselves increasingly under investors’ spotlight.”4

The funds industry also has work to do in addressing gender diversity. At the end of 2000, 14% of fund managers were women, according to data and analytics specialist Morningstar. However, at the end of 2019, this figure remained unchanged at 14%. There had been little measurable improvement in addressing this inequality of gender representation in money management teams.5

According to its February 2021 Diversity, Equity and Inclusion survey, Morningstar finds that only five of the 11 markets in which the survey was conducted have laws in place regarding disclosure on diversity policy that apply to investment firms – notably Finland, France, Norway, Sweden and the UK.

However, Canada, Denmark, Germany, Italy, Spain and the US still do not have disclosure laws on diversity policy.6

In May 2020, the Investment Association issued a diversity and inclusion statement, indicating that it aims to create a diverse and inclusive UK investment industry at all levels, including within the Association’s own employment structure. “Successful businesses create an environment where people want to work, where they feel challenged, able to use their talents, and valued,” it says.7

This will include steps to attract, develop and retain talent from a wider pool – recognising that minority groups and women are under-represented in the industry, especially in senior positions. It also aims to promote a change in corporate culture, taking action to address the gender pay gap along with practical guidance to promote ethnic diversity and LGBT representation.

Pension fund governance
When asked to identify the major challenges confronting pension funds boards in the current investment climate, 54% pointed to the current low interest rate environment as their top priority (fig 11). More generally, almost half highlighted a broad focus on risk management (46%), including investment risk management, regulatory risk and asset servicing risk. In the context of the preceding discussion, it is significant that 45% of respondents highlight ESG and climate change risk in their top three priorities. 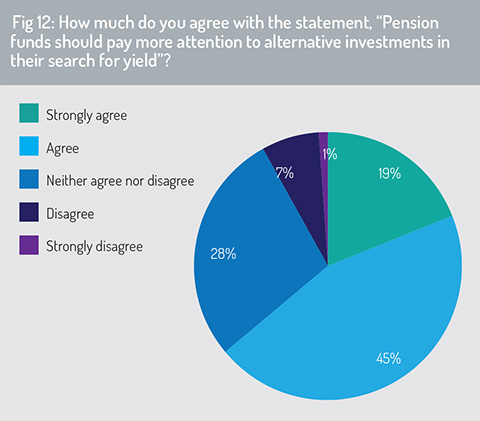 Pension funds have traditionally held fixed income instruments as a key component of their asset allocations, providing the diversification and stable cash flows required to match their obligations to retirees. But when bond yields are close to historic lows and equity returns are highly volatile, this presents challenges for pension funds in satisfying their return expectations, meeting funding levels and safeguarding the cash flows required to meet obligations to scheme members.8

Given the magnitude of fiscal and monetary stimulus that leading economies have experienced during the past 12 months – and in the longer term since the 2008 financial crisis – investment boards remain wary of inflationary pressures and watchful regarding the potential formation of asset price bubbles in equity, commodity and real estate markets.

Recent evidence suggests that pension boards must give careful consideration to governance and engagement considerations associated with their investments. In the UK, trustees of defined benefit, defined contribution and hybrid schemes are required by law to compile annual Implementation Statements which detail how their engagement policies as shareholders (including how they have exercised voting rights) have been fulfilled. 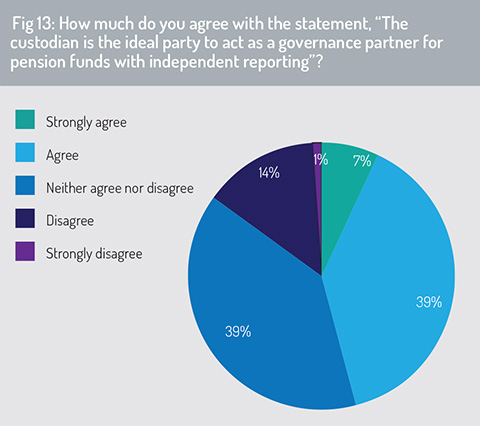 However, a March 2021 study by Dalriada Trustees and Minerva Analytics found that only one-third of asset managers surveyed were able or willing to respond effectively to information requests from pension funds regarding how they engage with investee companies. Out of 43 asset managers analysed in this study, nearly 30% provided no information at all and 40% of managers said there was no information to report.

David Fogarty, director of Dalriada Trustees, commented: “As trustees, we need to show to members what action we are taking in terms of engagement on assets we govern on their behalf. Yet we are in a position where we are receiving insufficient information from the asset management community. We are seeing managers marketing funds for their ESG credentials, but they are failing to provide clear evidence of the actions being taken.”9

The UK’s minister for pensions and financial inclusion, Guy Opperman, said recently that it is “totally unacceptable” that fund managers are ”unable or unwilling” to respond to information requests from pension funds.

Faced with these challenges, Funds Europe asked respondents, “Is a pension fund custodian the ideal party to act as governance partner in assisting the pension fund with independent reporting?” The balance of opinion (fig 13) was in support of this statement, with 46% saying that they agreed and 7% agreeing strongly. This substantially outweighs the 15% who disagreed with the statement.

Significantly, however, a sizeable percentage (39%) were agnostic about this proposal, with no strong opinion for or against.