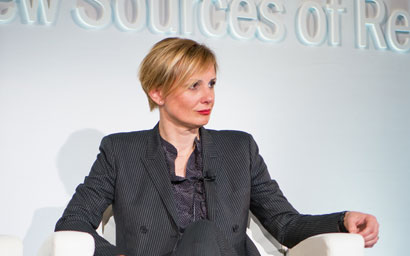 The Eurozone lift-off is welcomed – but the need for income is still a fundamental challenge. With bond yields at record lows, new sources of income are needed. Funds Europe was media partner at the Pioneer Investments annual investor conference.

Occasionally, Pioneer Investments’ annual client conference was a festival of joy. Eurozone quantitative easing (QE) made it so.

Despite 2015 being the eighth year of Europe’s growth dilemma, Pioneer’s expectations are higher than ever for a recovery in European economies. The firm is also optimistic about growth in the region’s corporate profits – and it is truly excited about European equities.

“If you have European equities you will have made a lot of money [by this time next year]. You heard it from me!” he told the audience of 180 fund selectors.

Monica Defend (pictured), Pioneer’s head of global asset allocation research, said Europe is “finally getting better” and that the economy is accelerating. She prefers European equity to US in relative terms, and added: “We are long Europe – a lot.”

Corporate profitability, which has been growing since the third quarter of 2014, is part of the reason. Defend told the audience of global investors that though European earnings per share (EPS) trail the US, these will catch up and give the market recovery – which saw main benchmarks up around 20% in the first quarter – a degree of longevity.

“When I look at European equity, back in June 2009 Europe was beating the US, though it did not last due to macro fragility.”

Though macro factors were a drag for equities at that time rather than companies themselves, corporates are in a better position today because QE is providing greater confidence.

“EPS readings are moving upwards in Europe – and in emerging markets,” said Defend.

Emerging markets are important to Europe’s companies, which have higher exposure to them than US firms – a point not lost on former Goldman Sachs economist Nielsen.

“[And] if emerging markets start to look better, then European companies are more exposed to them than US.”

Pioneer says volatility in markets will be higher and that non-euro investors should hedge the devaluing currency.

THE NEED FOR INCOME PERSISTS
A breath of fresh air, rather than a brand new dawn, is one way to describe the Eurozone equity story. Local equity markets are pockets of celebration in an otherwise stifling atmosphere.

Europe still needs to turn potential growth into actual growth by shifting liquidity into the real economy. For the fixed income investor, the conference heard, Eurozone QE has sent yields lower and fears of a liquidity trap exist.

Meanwhile, US yields are also still low, particularly at the short end of the curve. China growth continues to be a question for emerging markets. And geopolitical tensions are almost everywhere.

The need for income continues to be the key characteristic of the investment landscape. Moreover, with fixed interest returns so low, the crucial mission is to identify new sources of income, which was the theme of Pioneer’s three-day conference in Boston, Massachusetts.

Loans and fixed income investing in GDP-weighted benchmarks will help meet this challenge, the conference heard. GDP benchmarks will help diversify from the world’s largest debtors that dominate cap-weighted benchmarks. And though Tanguy Le Saout, head of European fixed income, predicted that bond investing will become harder in the yield-reducing QE environment, behavioural factors in the market and other themes will provide opportunities for active bond managers.

In addition, equity dividends still have a role. Piergaetano Iaccarino, head of thematic and disciplined equity, noted that US dividend stocks had re-rated mostly due to QE there. Europe’s own programme could similarly lift ratings of Eurozone income stocks, he said.

Dividend yields have been stable in the past two to three years and companies – flushed with cash but still with nowhere to invest it – want to please investors and give it to them instead, Iaccarino says. At the same time, the Japanese dividend story is still running.

Karl Huber, senior portfolio manager (Europe), is overweight on banks and cyclicals in dividend season. He is targeting a 7% income, which he notes is ambitious, but uses high-yield equities and a call option process to enhance yield.

REAL PROGRESS
For now, though, European equities are the conference stars. After years of worry for the very future of the Eurozone, the region – according to Andrew Arbuthnott, head of European large-cap equity – now shows up better than Japan, the UK and the US on a debt-to-GDP measure.

“A lot of peripheral countries have made real substantial progress in turning current account deficits into reasonable surpluses,” he says.

But the seasonal pattern may mean less strong stock markets in the second quarter, and factors such as UK  elections could cause consolidation, he says.